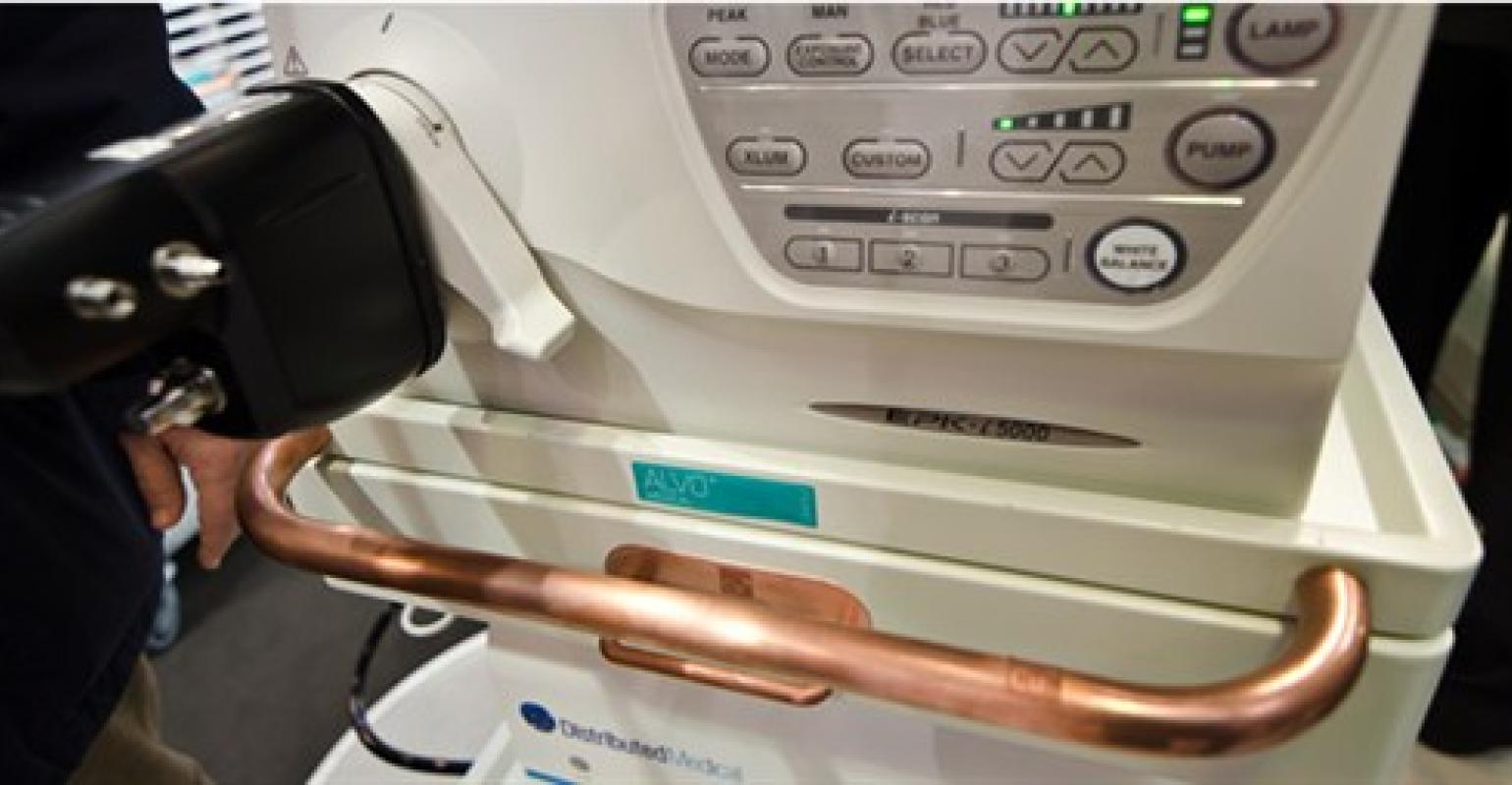 There has been an uptick in the use of the material in surfaces that are commonly touched as shown in the medical device trolley below from ALVO Medical.

One out of every 20 U.S. hospital patients acquires a hospital-acquired infection (HAI). Such infections are estimated to cause 100,000 deaths each year in the United States, while adding an estimated $45 billion to the nation's healthcare tab. A number of recent studies suggest that copper, which has natural antimicrobial properties, could significantly reduce the numbers of such infections. For instance, a study published in the May issue of Infection Control and Hospital Epidemiology reported that the use of antimicrobial copper surfaces in hospital settings can reduce the number of HAIs by 58%. In contrast to the traditional cleaning procedures used within hospitals, the antibacterial effect of copper surfaces is permanent instead of episodic and not prone to antibiotic resistance. Stainless steel, which is commonly used in healthcare applications, does not have bactericidal properties.

Another recent study reported that, by using copper in commonly used hospital surfaces, the risk of acquiring an infection could be reduced by 45%. Last year, UCLA received a $2.5 million federal grant to conduct further research on the use of copper to combat HAIs.

Despite copper's antimicrobial properties, silver continues to be the most commonly used material for destroying bacteria on medical device surfaces. The metal offers broad-spectrum efficacy against Gram-positive and Gram-negative bacteria. A Fraunhofer study found that blending silver and copper in a 50/50 ratio resulted in a material with optimal antimicrobial properties and minimum cytotoxicity.

The subject is beginning to receive mainstream attention. CNN ran a feature titled "Copper in hospital rooms may stop infections." The metal destroys bacteria by coaxing the organism to donate electrons to it, resulting in the production of free radicals within the cell. The result is damage to bacterial' DNA and cell proteins. The metal is also effective against viral and fungal pathogens.

While copper has been used on surfaces such as hospital door handles, bed railings, and light switches, the material is being employed for a growing number of medical device applications as well. Examples include IV poles and in a copper aerosol guide pipe is used in inhalation systems.

One hurdle to using copper in medical properties is its reputation of being an old-fashioned material that is prone to tarnishing. Copper alloys exist, however, that resist tarnishing while offering a strength profile similar to steel. Incidentally, the colors of the available alloys ran the gamut, from silver to reddish.

There are other routes to employing silver in medical devices. For instance, copper oxide particles can be incorporated into polymeric materials, to gradually release copper ions. Copper also plays a role in wound healing, so such a material could be a good candidate for wound dressings. Nevertheless, the material will likely primarily be used in the near term by the device industry as an antimicrobial surface for equipment used in hospitals.