Why Does It Feel Like Medtech Is Living in a Bill Murray Movie? 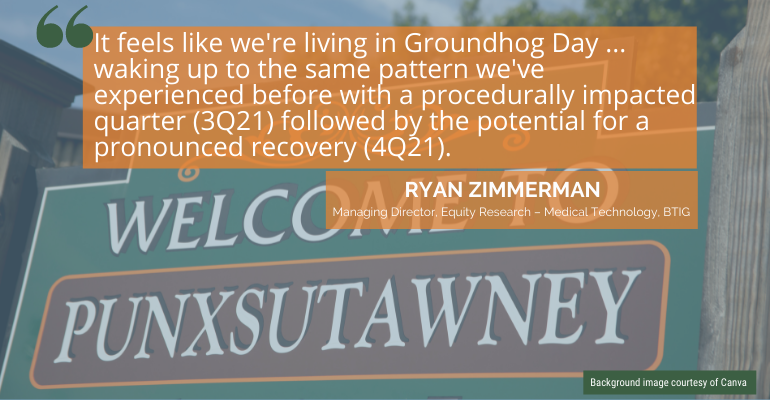 Forecasting the medtech market in 2021 is a bit like asking a groundhog to predict the weather.

Every year on February 2, my family watches the 1993 Bill Murray comedy, "Groundhog Day." So, I was intrigued when a report popped up in my inbox today from Ryan Zimmerman, a medtech analyst at BTIG, with the subhead, "It's Groundhog Day and Medtech Is Phil Connors."

Each quarter the industry's research analysts try to predict what the market will do in the quarter ahead, and in a normal year, they're usually not too far off. In a pandemic year, however, making such predictions is a bit like pulling Punxsutawney Phil from his burrow on Gobbler's Knob and asking if he sees his shadow. And then using his supposed "response" to forecast the weather.

At the beginning of 2021, and well into the second quarter, all eyes in the industry seemed to be on the back half of the year. Medtech executives grappled with a lot of uncertainty heading into the year and, at that point, were putting most of their eggs, so to speak, into the third- and fourth-quarter baskets. That's when they thought, based on what they knew at the time, procedure volumes would finally bounce back to pre-pandemic levels, and the outlook for the rest of the year would become much clearer. A look back at some key takeaways from first-quarter earnings calls demonstrates this point well.

"We really do see this as a tale of two different halves, with the shape of the second half being very different than the shape of the first half," said Jay Saccaro, Baxter's chief financial officer, during the company's first-quarter earnings call.

We heard similar commentary during other medtech earnings calls that quarter, but that's not to say these industry leaders were naive to the possibility of further disruptions.

"...Now it's not over, and I think all of us realize that," Zimmer Biomet CEO Bryan Hanson said during his company's first-quarter call on May 4. "But I for one feel more optimistic than ever that we're coming out, I think, on the other side of COVID-19. And with that, much better days ahead.”

Sure enough, it wasn't over. As the COVID-19 Delta variant swept through the United States, hospitals in many parts of the country, including Texas, once again had to put elective (or deferrable) surgery cases on hold. That shift impacts medical device companies, which depend on procedure volumes for a big chunk of their revenue.

"Medtech saw a meaningful shift away from momentum as Delta dominated sentiment in the quarter and investors moved away from higher-multiple names," Zimmerman wrote in his October 12 report.

The question is, he continued, will medtech snap back in the fourth quarter?

"It feels like we're living in Groundhog Day ... waking up to the same pattern we've experienced before with a procedurally impacted quarter (3Q21) followed by the potential for a pronounced recovery (4Q21)," Zimmerman wrote.

The BTIG analyst noted that many medtech companies updated investors during the third quarter with negative commentary and lower guidance as hospitals in various geographies saw lower procedural volume due to the lack of available resources and/or patient apprehension. But maybe — just maybe — there will be a light at the end of the 2021 tunnel.

Zimmerman said the fourth quarter is usually seasonally strongest for all of the medtech industry, "and when coupled with a backlog, increasing vaccination rates, and a rapidly declining positivity rate of COVID cases, we think 4Q21 could prove to be strong for Medtech returns again."

The analyst also pointed out that when he looks back at past periods of significant momentum underperformance, they are usually followed by a quarter of pronounced returns, also known in investment jargon as a snapback.