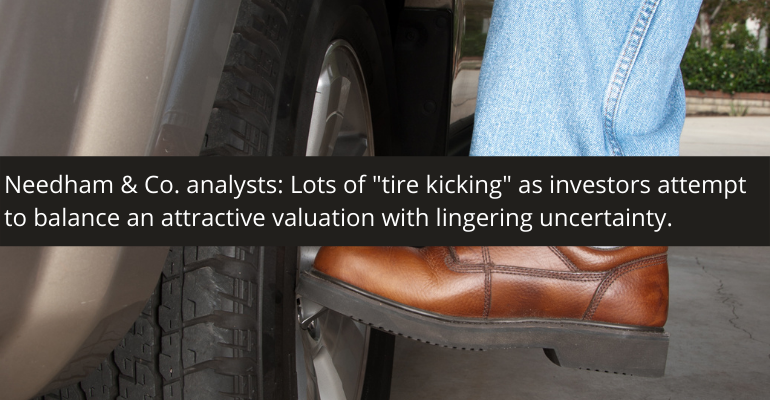 Medtech analysts share insights for one of their most frequently asked about companies.

In recent weeks, Needham & Co.'s team of medtech analysts met with a series of investors across several regions of the United States. Earlier this week we shared their insights on AtriCure. Haemonetics was also among the most frequently asked about companies during those conversations, according to a report from Needham's Mike Matson, David Saxon, and Joseph Conway.

The take-home message on Haemonetics, according to the Needham analysts, is that there is currently a lot of "tire kicking" as investors try to balance an attractive valuation with lingering uncertainty. To put things into context a bit, Haemonetics lost a contract earlier this year with CSL Plasma, a Boca Raton, FL-based network of centers that pay donors for plasma donations. Haemonetics reported in April that CSL had decided not to renew its supply agreement for the use of Haemonetics' PCS2 plasma collection system devices and the purchase of disposable plasmapheresis kits in the U.S. after the current agreement term expires in June 2022. The company said the decision was based on changes in CSL's internal strategy and was not related to product or service quality.

On the other hand, the Needham analysts said they believe that Grifols, Haemonetics' other big plasma customer, is believed to be on track with adoption of the NexSys plasma collection system with Persona technology, which FDA cleared about a year ago. The analysts previously estimated that NexSys could add about 24 cents to the company's earnings per share, but in the recent report they said it is unclear if Haemonetics can command the same price premium following the loss of CSL.

Haemonetics also has an ongoing restructuring program, which the company recently extended by two years (through fiscal year 2025) and $35 million of savings as it attempts to offset the loss of CSL, the analysts noted.

The report also indicates that Haemonetics' management team is confident that its underlying plasma collection growth can return to about the 8% to 10% range, and that fiscal second-quarter 2022 volumes are up in the mid-20% range compared to the mid-teens in the fiscal first quarter.

"We believe [Haemonetics] can overcome the CSL loss over time, and that its valuation is attractive," the Needham team said.