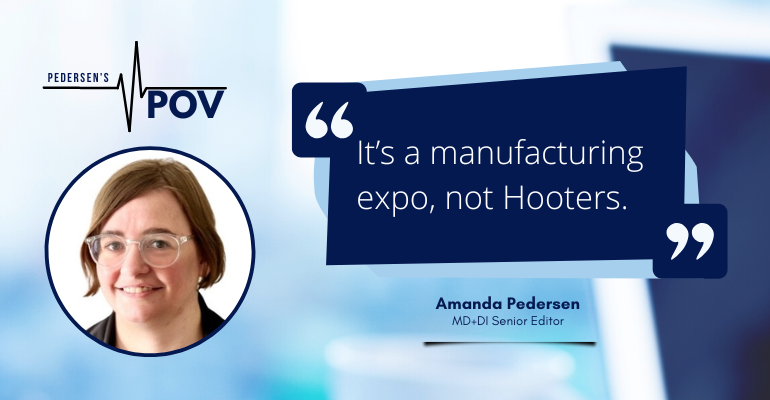 This week in Pedersen's POV, our senior editor urges manufacturers to think twice before hiring "booth babes" for industry expos.

Advanced manufacturing has a branding problem – and if a recent trade show is any indication, some companies are making the optics worse instead of better.

The post includes a photo taken earlier this month at Fabtech in which an older man is posing with two scantily clad young women with welding masks on their heads.

Hall, who is well known in manufacturing circles as an advocate for younger generations and women in manufacturing, said he felt defeated when he saw these “booth babes.” He thought the manufacturing industry had evolved past the practice of hiring this type of talent to market products at expos.

“Let's make the manufacturing industry a culture our daughters can be a part of,” said Hall, who also happens to be the father of two young girls.

In a pinned comment on Hall’s post, the American Welding Society (AWS) quickly attempted to distance itself from the incident – given that the photo was taken in front of the AWS booth.

To be clear, I’m not judging the young women in the photo. They were hired to do a job, and I respect their choice. The problem lies with the company that hired these models, and with the organizers of Fabtech for allowing the offending company to bring them to the show wearing outfits designed to play up their sex appeal. It’s a manufacturing expo, not Hooters.

Having read Fabtech’s show atmosphere policy, I find it hard to believe this practice doesn’t violate the expectations of providing a “friendly, safe, and welcoming environment for all.”

At last count, Hall’s post had attracted 3,374 reactions (including nine “funny” reactions – although I fail to see the humor), 87 reposts, and 746 comments.

The comments range from those applauding Hall for taking a stand on the issue to those defending the practice of hiring “booth babes” and telling the rest of us to “lighten up.” I probably shouldn’t be shocked by the number of commenters in the latter category, but I am. I guess that makes me naïve.

In recent years industries such as medtech have made a concerted effort to improve diversity, inclusion, and belonging across their organizations. There is nothing inclusive about using models at trade show booths, nor does the practice promote a sense of belonging for women in manufacturing.

The offending company should look at its customer base and ask itself if this marketing tactic aligns with its customers’ values. I’m guessing the answer is no. Likewise, companies attending manufacturing trade shows should hold their partners to a higher standard. Take a closer look at the marketing tactics used on and off the expo floor and blacklist those who engage in such backwards practices.

Hall should be commended for using his social media presence to bring attention to this issue in a tactful way. When the culture of an industry is so grossly outdated, a constructive dialogue goes a long way toward creating change.

Pedersen's POV publishes every Monday. If there’s a topic you would like her to consider, email [email protected] (please put “POV” in the subject line

How Can Manufacturing Close the Generation Gap?
Mar 28, 2022

Using AR and VR to Train Workers in Manufacturing
Feb 03, 2023

Busting the Myths about the Future of Manufacturing
Feb 03, 2023