How Can Manufacturing Close the Generation Gap? 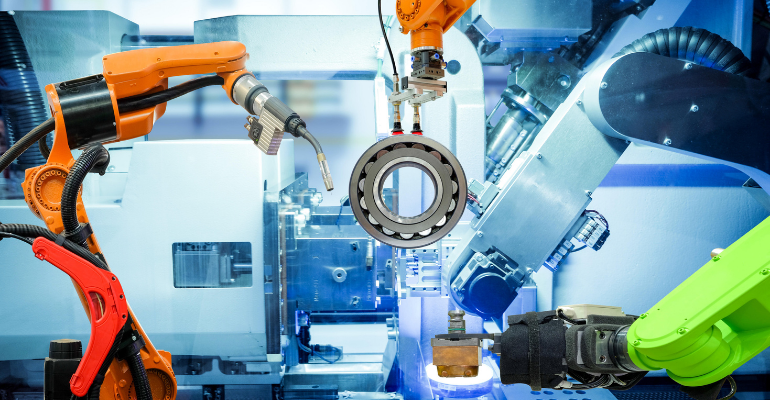 Why there is a generation gap in manufacturing, and how to solve it.

Baby boomers and millennials love to give each other a hard time, an animosity that, in recent years, gave birth to the internet meme and catchphrase, "okay, boomer." Offline, however, this generation gap is having a serious impact on the manufacturing industry, where boomers are rapidly approaching retirement and not being replaced by younger generations.

Two manufacturing experts recently addressed the generational gap in manufacturing during a lively webinar hosted by the Association for Advancing Automation and explored ways in which automation technologies can improve life on the factor floor for all generations. Jake Hall, best known on social media as the Manufacturing Millennial, and Joe Campbell, a baby boomer and senior manager of strategic marketing and applications development at Universal Robots, presented the friendly debate, "Okay Boomer: Closing the Generation Gap in Manufacturing."

Hall will also participate in a fireside chat April 12 at MD&M West in Anaheim, CA, "Let's Talk Manufacturing and Building a Better Workforce."

Below are some of our favorite highlights from Hall and Campbell's debate.

'Manufacturing is just a bunch of old people ... it's the silver tsunami' 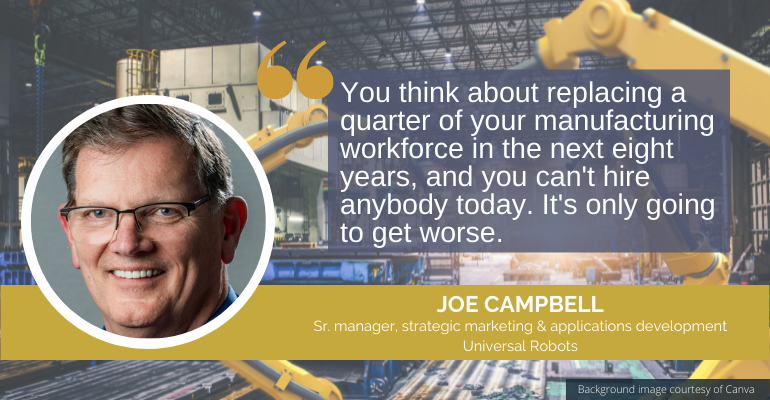 "Manufacturing is just a bunch of old people is what it comes down to, it's the silver tsunami," Hall said in jest. "...And it's the older generations' fault why no millennials and gen Z's want to get involved ... you guys created an industry that's dark, it's dirty, and it's dangerous."

Hall pointed out that it's not just the workforce that the industry is losing, but the knowledge that those workers will be taking with them.

"Imagine all of that knowledge that you've had in your manufacturing environment for 20-30 years that's not written down on a piece of paper ... it's not just the labor, it's literally the billions of dollars in this industry that has gone into training ... and you're losing them," Hall said.

It's a problem that has only been compounded over the past two years by the COVID-19 pandemic.

"Pre-COVID there were a lot of companies that were paying their boomers who were ready to retire a premium, giving them flexed hours, paying bonuses to get them to stay for just a couple more years to try to transfer all that knowledge," Campbell said. "Now, with COVID, a lot of that went away because a lot of the boomers, guys like me, they said, 'you know what? I just don't want the risk. I'm done.'"

Where did all the manufacturing training go?

Hall said that when he graduated from college and entered the workforce, all the manufacturing job listings were asking for four years of experience for an entry-level job.

"I think that's where we came off the track," Campbell said. "Because when I came out of college you got trained. It's just the way it was, whether you were in a blue collar or white collar [position] there were really significant training opportunities available. And I don't think it's there today."

The boomer generation is also guilty of pushing their kids toward a college education when some of them would have been better off learning a trade.

"Parents, if you want to get your kid involved with something and they don't know what they want to do when they grow up, have them look at a skilled trades program where they can get involved, they can get paid to learn, they can take up very little risk," Hall said. "...I know people who are my age who still have $70,000, $80,000, $90,000 in student loan debt 10 years after graduating because they went to a D1 school and then got a degree that pays them $32,000 a year."

Manufacturing veterans also may be guilty of not wanting to give younger workers the same amount of responsibility as they had at their age.

"There are many boomers who look at millennials and gen Zs and go ‘you know, they're too young for that kind of responsibility, that needs to be a boomer responsibility.’ Well, that's not true because how did we get to where we are? We had a lot of responsibility thrown at us," Campbell said. "We did get some training to go along with it, which is maybe a little bit difficult to find today, but we have to break down those stereotypes because it is really impeding a lot of good decisions."

How can the manufacturing industry attract the younger generations? 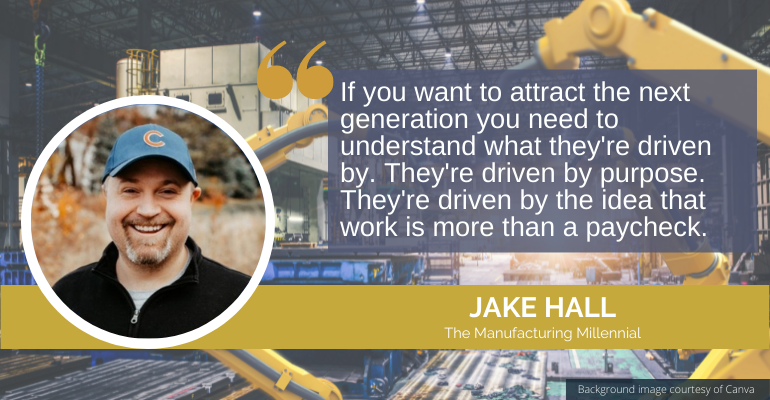 "From the robot view of the universe, you've got to automate the dull, dirty, and dangerous," Campbell said. "You're not going to get any of the younger generations to walk into a factory and say 'that's what I want to do. I want to stand in front of a machine and just load parts day in and day out for 25 years.' It's just not what they're up for, so we've got to automate those operations first."

Hall said millennials and gen Z's are driven differently than their parents and grandparents were.

"If you want to attract the next generation you need to understand what they're driven by. They're driven by purpose," Hall said. "They're driven by the idea that work is more than a paycheck. ... [They] want to be in a place where they're impacting and making change. If they're going into a job and all their job is from eight to five loading parts and they don't have any future growth or impact beyond that, that's not going to be attractive to them."

Hall encouraged manufacturing businesses to ask themselves these questions: "What are you doing to help grow that person as a professional? As a person who is young who's still trying to identify what they want to be when they grow up and how they want to [have an] impact and make a name for themselves. How are you impacting their life personally beyond just writing them a paycheck every two weeks and hosting pizza parties for them when you hit your monthly goal?"

Campbell said he loves to see manufacturing businesses automate a process that is less attractive to its workforce, and then moving their skilled manufacturing workers into higher value job functions.

"The first time I really saw that in action was in a weld shop," he said. "Welders are like artists. They are very highly skilled and one of the things that we heard is that they hate to do repetitive, high-volume parts. ...Move them into a higher value job doing a larger weldment, for example. ...Now their skillsets are challenged, and it pays off in job satisfaction."

Check out the on-demand version of the webinar here.