Veracyte CEO to Pass the Torch After 14 Years 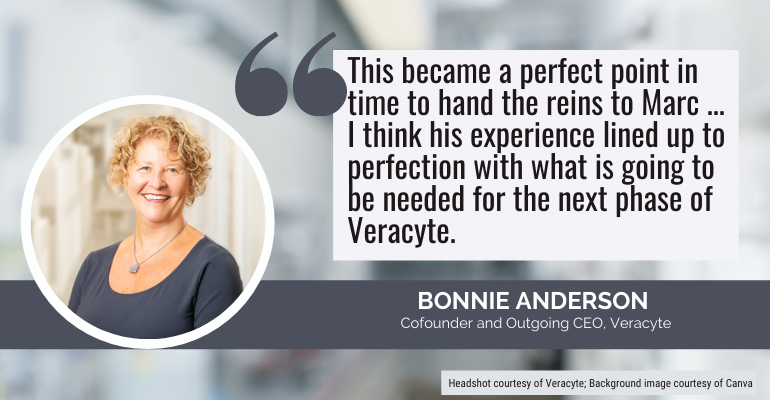 Veracyte Cofounder and CEO Bonnie Anderson will stay on as an active executive chairman after Marc Stapley takes over on June 1.

Bonnie Anderson set out 14 years ago with an ambitious vision of building a global genomic diagnostics enterprise that leverages deep insights to transform care at every step of the patient’s journey, from early detection of cancer and other diseases, to diagnosis and treatment decisions. Anderson co-founded South San Francisco, CA-based Veracyte in 2008 and, as CEO, led the company through its IPO in 2013 (an accomplishment few female founders have ever reached), has spearheaded commercialization of its products, and has played a key role in positioning the company for global expansion using its own distributed instrument platform.

Today, Veracyte has a broad menu of current and pipeline tests that span the care continuum across a wide range of diseases. The company has positioned itself in seven of the top 10 cancers in the United States, and has grown both organically — building products through discovery, development, and commercialization — and through acquisitions, including its most recent acquisition of Decipher Biosciences.

"A couple of years ago, we also executed a transaction to gain access to our own testing platform, so that we could take our portfolio of really high-value tests that are informing on better patient outcomes today here in the U.S., and put those onto a testing platform so they can be done locally by laboratories all over the world, so that patients everywhere can get access," Anderson told MD+DI on Monday.

Now, Anderson is passing the torch to industry veteran Marc Stapley, who will take over as CEO of Veracyte on June 1. Anderson will remain with the company in an active executive chairman role, serving as an advisor to Stapley for the next few years to ensure a smooth transition, and will continue to serve on the board.

Stapley will join Veracyte from his current role as the chairman and CEO of Helix, a population genomics company. Under Stapley’s leadership, Helix has built one of the largest COVID-19 testing labs in the United States, and has become a national leader in viral surveillance. Stapley was appointed CEO in April 2019 and has been a member of Helix’s board of directors since 2015, when the company was founded. Before Helix, Stapley served in executive leadership positions at Illumina.

"We are deep in the moment of continuing to execute in a big way on that global vision and global expansion strategy, and this became really a perfect point in time to hand the reins to Marc, because he's got such a strong track record of global operations experience, being able to scale, running both a central lab business as well as an instrument and kit business, which is what we will be doing, and I think his experience lined up to perfection with what is going to be needed for the next phase of Veracyte," Anderson said.

Stapley told MD+DI that one of the key factors that attracted him to the position at Veracyte was the strategic plan for Veracyte, along with the company's track record of execution, and the opportunities that lie ahead.

"I love the clinical diagnostic expertise that the company has, I love that there’s so many broad and deep ways for us to continue to grow, and the portfolio and pipeline is rich, and that's exciting," Stapley said. "Some of the strategic moves that have been made over the last couple of years, I think, have been really key, and have given the company an amazing opportunity, and that fits pretty well with what I want to accomplish in my career."

Both Anderson and Stapley said they look forward to working closely together through the transition.

"Her active role is a real bonus for me, a benefit for me, from my standpoint," Stapley said. "Having somebody with Bonnie’s industry credibility, reputation, and of course 14-year history with the company, having her by my side for as long as she's willing to do that, I think is a really important facet here, and made it even more attractive to me."