The Sustainable Importance of Platinum in Biomedical Applications

The world’s growing population is spurring the demand for increased access to advanced healthcare treatments. According to the United Nations Environment Programme (UNEP), the global population will surpass 9 billion by 2050, nearly 90% of which will be living in developing countries (Figure 1).1 With an aging and growing world population, there is expected to be a growing demand for healthcare products and services that use components made from platinum, other platinum group metals (PGMs), and their alloys.

The world’s growing population is spurring the demand for increased access to advanced healthcare treatments. According to the United Nations Environment Programme (UNEP), the global population will surpass 9 billion by 2050, nearly 90% of which will be living in developing countries (Figure 1).1 With an aging and growing world population, there is expected to be a growing demand for healthcare products and services that use components made from platinum, other platinum group metals (PGMs), and their alloys. Increasing access to healthcare and advanced medical treatments in developing countries means platinum will play a key role in improving the quality of life of people around the world. 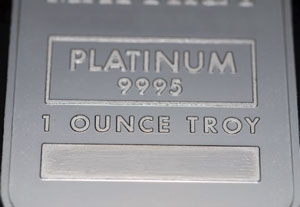 Among the implications of this growth trend is increased use of platinum in medical technology. Since the early 1970s, platinum has been used internationally in a variety of medical devices to treat ailments such as heart disease, stroke, neurological disorders, chronic pain, and other life-threatening conditions. The metal is used to make essential components for pacemakers, implantable defibrillators, catheters, stents, and neuromodulation devices among others. The properties of platinum that make it attractive for such applications include its biocompatibility, inertness within the body, durability, electrical conductivity, and radiopacity. The material can be used to manufacture components in a variety of forms, from rod, wire, and ribbon to sheet and foil, as well as high-precision micromachined parts. In 2010, it was estimated that 175,000 oz. of platinum was used in biomedical devices. Approximately 80% was usedin established technologies, such as guidewires and cardiac rhythm devices, while the remaining 20% was used in newer technologies, such as neuromodulation devices and stents.2
The Advantages of Platinum for Biomedical Uses

There are a number of different types of neurostimulation, depending on the condition being treated. Spinal-cord stimulation (the most common neuromodulation therapy) is used to treat severe chronic pain, often in patients who have already had spinal surgery. Small platinum electrodes are placed in the epidural space (the outer part of the spinal canal) and connected to an implanted pulse generator. The patient can turn the stimulation off and on, and adjust its intensity.
In deep brain stimulation (DBS),the electrodes are placed in the brain itself. DBS may be used to treat pain and movement disorders such as Parkinson’s disease. It is also being investigated as a potential treatment for a range of other illnesses, including epilepsy and depression. Epileptic patients can also be treated using a vagus nerve stimulation device (the vagus nerve is situated in the neck).
A cochlear implant is used to restore hearing to people with moderate to profound hearing loss (many patients receive two implants, one in each ear). A typical device consists of a speech processor and coil, which are worn externally behind the ear; an implanted device just under the skin behind the ear; and a platinum electrode array that is positioned in the cochlea (the sense organ that converts sound into nerve impulses to the brain). The speech processor captures sound and converts it to digital information that is transmitted via the coil to the implant. This in turn converts the digital signal into electrical impulses that are sent to the electrode array in the cochlea, where they stimulate the hearing nerve. These impulses are interpreted by the brain as sound. It is believed that around 200,000 people worldwide have received one or more cochlear implants. 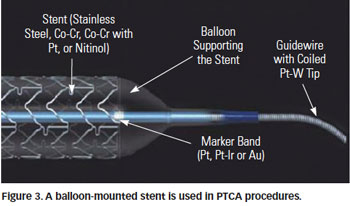 At present, neuromodulation is expensive and only available at a small number of specialist centers; even in developed countries, only a small proportion of potentially eligible patients receive this treatment. However, neuromodulation can be used to help patients with common and sometimes difficult-to-treat conditions (such as chronic pain, epilepsy, and migraine). Its use might therefore be expected to increase significantly in coming years as new indications for these therapies are established.
Other Implants. Platinum’s biocompatibility makes it well suited for temporary and permanent implantation in the body, a quality exploited in a variety of treatments in addition to the heart implants already discussed. Irradiated iridium wire sheathed in platinum can be implanted into the body to deliver doses of radiation for cancer therapy. This treatment takes advantage of platinum’s radiopacity to shield healthy tissues from the radiation, while the exposed iridium tip of the wire irradiates the tumor. Although this procedure is gradually being replaced by other forms of radio- and chemotherapy, it remains a useful weapon in the battle against cancer.
A more recent development is the use of coils made of platinum wire to treat aneurysms, which are balloonings in blood vessels caused by weaknesses in the vessel walls. If the patient’ s blood pressure rises, the vessel may rupture, causing a hemorrhage. Although this can occur anywhere in the body, platinum is mainly used to treat aneurysms in the brain, where surgery is difficult and fraught with risk. Platinum is used because it is inert, easy to shape, and radiopaque.
This treatment was first introduced in the late 1980s when a doctor and inventor, Guido Guglielmi,developed a detachable platinum coil that could be used to treat brain aneurysms. Coils are delivered to the site of the aneurysm by microcatheter, then detached using an electrolytic detachment process; once in place, the coils help coagulate the blood around the weak vessel wall, forming a permanent seal (Figure 4). Depending on the size of the aneurysm, between one and 30 coils are used; these are left inside the patient indefinitely. The Guglielmi Detachable Coil (GDC) device was approved in Europe in 1992 and in the United States in 1995. By 2009, it was estimated that this and subsequent generations of platinum coil technology were being used in 30–40% of patients treated for brain aneurysms in the United States.
The Manufacture of Platinum Biomedical Components
There are many technologies used to produce PGM components for biomedical applications, ranging from rod, wire, ribbon, and tube drawing, to sheet and foil manufacture and highly precise Swiss-type screw machining, or micromachining.
Rod and wire are manufactured in diameters ranging from 0.001 in. to 0.125 in. Dimensional consistency is assured by laser measurement. Rod products are used as the starting material for a variety of machine components, with most of the PGM parts being used in pacemaker, defibrillator, and other electrical stimulation products. Wire products are used primarily in three applications:
Platinum-tungsten and platinum-nickel fine wires are used on balloon catheters as guidewires for positioning the catheter in exactly the right location.
Other PGM wires are used as microcoils for neurovascular devices such as treatments for brain aneurysms.
Platinum-iridium wires are used as feed-through wires or connector wires that connect the pacemaker lead to the pulse generator.

Ribbon is manufactured in the form of continuous strips of rolled wire in a variety of platinum alloys. Ribbon is often used in place of round wire to produce coils with minimum outside diameter and is generally used for guidewire and microcoil applications. Ribbon is sometimes preferred over wire because wire can be harder to coil. It can also be used for markers instead of traditional cut tubing. Table II shows some typical specifications and applications for PGM rod, wire, and ribbon.
Fine diameter platinum, platinum-iridium, and platinum-tungsten tubing (0.125 in. internal diameter and below) cut to specific lengths is used for markers or electrodes on angioplasty, electrophysiology and neurological catheter devices, aneurism tip coils, feed-through wires used to connect the pacing lead to the pulse generator (also known as the can) that houses the hybrid microelectronics and the battery, and pacemakers. Some applications of thin-walled precious metal tubing are shown in Table III.
Sheet and foil are mainly made from pure platinum, platinum-iridium alloys, or rhodium. It can be shaped, formed, and rolled to a variety of dimensions. Sheet or foil can be cut, formed, and placed on a catheter for marking in a way similar to ribbon. Rhodium foil is used exclusively as a filter inside x-ray mammography equipment to enhance the viewing image. Table IV shows some examples of applications of PGM sheet and foil.
Micromachined parts are complex and very small—some are only 0.006 in. in diameter and barely visible to the naked eye. Fabrication must be extremely precise to maintain the necessary quality and dimensional tolerances, which can be as low as ±0.0002 in. Highly specialized equipment and techniques such as computer numerical-controlled Swiss screw machines and electrical discharge machining must be used (Figure 6). The automated high-production Swiss screw machines are used to fabricate the main components, and EDM is used to achieve the fine details required for many platinum parts.
Specialty metal micromachined parts (0.8 in. diameter and smaller) are made from a variety of materials, including pure platinum, platinum-iridium alloys, and gold, as well as nonprecious metals and alloys such as stainless steel, titanium, MP35N cobalt-nickel-chromium-molybdenum alloy, Elgiloy cobalt-chromium-nickel alloy, Kovar iron-nickel-cobalt alloy, and materials such as Vespel, Delrin, and Teflon (see Table V for examples). These products serve device applications such as coronary stents, pacemaker and defibrillator pulse generator and lead components, heart-valve splices, endoscopic catheters, blood-gas analysers, kidney dialysis, and other medical devices and related equipment.
Parts made from PGMs are often complemented with a coating technology. Precious metal powders, titanium nitride, or iridium oxide are applied to create a more porous surface structure. The creation of a porous coating reduces the electrical impedance from the lead to the battery and allows for a good electrical connection, while reducing the energy needed to run the battery. This helps the battery last longer. Most pacing lead systems manufactured today have some form of porous surface. The end-use applications for coated PGM parts are the same as described above for uncoated parts.
Summary
For more than 40 years, platinum and its alloys have been used in a wide range of medical treatments, including devices such as coronary and peripheral catheters, heart pacemakers, and defibrillators. Newer technologies such as neuromodulation devices and stents also rely on the biocompatibility, durability, conductivity, and radiopacity of platinum to make key components in a variety of forms. Medical device manufacturers continue to invest in new technologies to satisfy the need for advanced medical treatments in both the developed world and, increasingly, the developing world. Platinum, the other PGMs, and their alloys will inevitably play a vital part in these developments.
References
1. UNEP/GRID-Arendal, “Trends in population, developed and developing countries, 1750–2050 (estimates and projections),” UNEP/GRID-Arendal Maps and Graphics Library, 2009: http://maps.grida.no/go/graphic/trends-in-population-developed-and-developing-countries-1750-2050-estimates-and-projections (Accessed on 9th February 2011).
2. J Butler, “Platinum 2010 Interim Review,” Johnson Matthey, Royston, UK, 2010, p. 21–22.
3. WF Agnew, TGH Yuen, DB McCreery and LA Bullara, Experimental Neurology, 1986, 92, (1), 162.
4. SB Brummer and MJ Turner, IEEE Transactions on Biomedical Engineering, 1977, BME-24, (5), 440.
Further Reading
This text was adapted from an article titled “A Healthy Future: Platinum in Medical Applications” by A. Cowley and B. Woodward in Platinum Metals Review, 2011, 55, (2), 98–107; doi:10.1595/147106711X566816.
1. More information on this subject can be found in the sources below:
2. “Biomaterials Science: An Introduction to Materials in Medicine”, 2nd Edn., eds. B. Ratner, A. Hoffman, F. Schoen, and J. Lemons, Elsevier Academic Press, San Diego, CA, 2004.
3. “Materials and Coatings for Medical Devices: Cardiovascular,” ASM International, Materials Park, OH, 2009.
Granta: Materials for Medical Devices Database, Cardiovascular Materials and Orthopaedic Materials: www.grantadesign.com/products/data/MMD.htm.
Brian Woodward is currently the general manager of Johnson Matthey’s Medical Products business (San Diego). Alison Cowley works as principal analyst for Johnson Matthey’s Market Research department (London).
TAGS: News
0 comments
Hide comments
Related