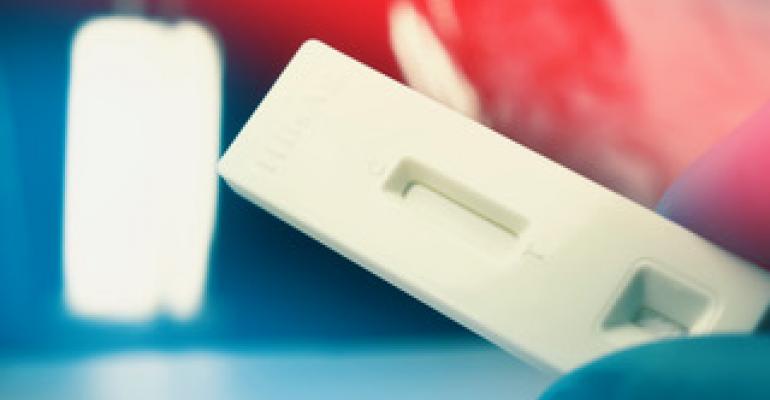 In diagnostics these days, “a lot of people are after plasma,” reports Jim Averso, vice president, sales and marketing, of I.W. Tremont. “There’s a lot of new research being conducted in plasma-based tests, although it is now very common for diagnoses of endocrine and cardiovascular issues. Prior to that, it was whole blood.” Biomarker analytes are easier to access in plasma, Averso added.

Averso pointed to new research from Market Research Future predicting 11.3% anticipated growth in the lancet market between 2016 and 2022, indicating the growth in the number of small sample volume tests that will be performed. This is primarily driven by increasing prevalence of diabetes and growing need for test devices indicating contagious and non-contagious disease, he shared.

Obtaining enough plasma from patient blood samples for analysis can be a challenge, particularly as sample sizes are shrinking. “There’s a focus on patient discomfort, driving a move to reduce lancet sizes from a traditional 28 gauge down to 33. This of course yields less fluidic volume samples from roughly 20 microliters to 10 or 11,” Averso explained. He pointed to the recently launched micro safety lancets from a number of large global device manufacturers for drawing a smaller blood sample for point-of-care and self-care testing. Diagnostic device designers, therefore, need to separate enough plasma from a smaller volume of whole blood. Some have suggested building up the sample volume using chase buffer, but this could impact the existing test chemistries and design, he said.

To offer such designers an alternative, I.W. Tremont has developed a material with a micro-glass structure that can separate a significant amount of plasma from whole blood efficiently, Averso said. D-23 was first commercialized about 10 years ago, and biochemically enhanced versions with an agglutinating chemistry that more efficiently separates plasma was developed about 6 years ago. The company has worked extensively with a CRO to develop biochemically enhanced materials for this platform of products. “We brought the optimization of the physical characteristics of the material about as far as we could, [and] we then looked to the experts in the chemistry of blood separation,” he told MD+DI.

“The material enables a fast wick and migration rate that is optimized to give up as much plasma as possible,” Averso continued. “Our material can produce more plasma from a sample, so the device designer doesn’t have to change the design. We can get the same yield out of a smaller sample.”

For instance, Averso said the typical yield for plasma separation substrates is about 20% if there is enough available plasma in a sample. “We can achieve 20% with mechanical separation [with standard D-23 and D-23-TC1], and 40% with the biochemically enhanced versions,” he said. 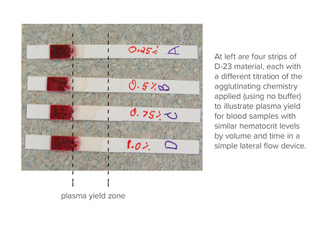 Above: Different plasma yields for different concentrations of the agglutinating chemistry applied to the material. Image courtesy of I.W. Tremont.

The material also minimizes hemolysis during separation and generates an optically clear plasma, supporting newer diagnostics that rely on optical analysis, such as PCR, he said.

In addition to separating plasma efficiently, D-23 can also be used to hold indicative chemistry (a reagent), eliminating the need for transfer to a conjugate pad, Averso said.

With such plasma efficiency and a minimized amount of components and chemistry, device miniaturization is possible, he said. Lab-on-chip support is also possible.

The material is already listed in a couple of 510(k) applications and in one patent, and nearly 100 clients are evaluating the material, he said.

I.W. Tremont continues to study how plasma interacts with the material and to replicate work done by customers.