HomeMarketsIVDThe Rumor Mill Is Churning, and Guardant Investors Are Not Having Any of It
Recent
Markets
Medtech in a Minute: Is Intuitive Calling Medtronic's Bluff?
Oct 22, 2021
Eastman Tritan MXF Chosen for Ivenix Infusion System & More Supplier News
Oct 22, 2021
Intuitive Addresses the Elephant in the Room - Hugo
Oct 21, 2021
Conmed Is Showing Growth Potential
Oct 21, 2021

The Rumor Mill Is Churning, and Guardant Investors Are Not Having Any of It

Graphic created in Canva by MD+DI 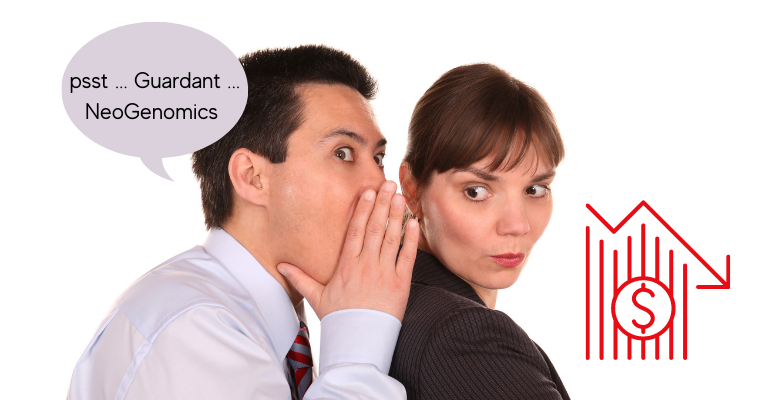 Guardant Health investors may be experiencing a bit of whiplash after the last couple of trading days.

On Friday, the Redwood City, CA-based company's stock tanked after a Bloomberg report that the company was considering an acquisition of cancer-testing firm NeoGenomics, citing "people familiar with the matter." The stock plummeted about 20% on the news, closing at $107.51, a clear indication that investors were not happy about the rumored deal.

Guardant's stock did rebound somewhat (about 7%) in early morning trading on Monday, however, after Bloomberg reported in a follow-up article that Guardant executives had decided against making an offer for Fort Myers, FL-based NeoGenomics. The stock slid back down in afternoon trading though, closing at $105.97. Guardant had a market cap of about $10.8 billion when markets closed on Friday. NeoGenomics' market cap was about $6 billion.

Guardant is a liquid biopsy company focused on enabling timely therapy selection for cancer patients while also advancing programs for recurrence detection and early cancer detection. The company is also working with pharmaceutical partners to develop companion diagnostics in order to discover and understand new treatment approaches for patients. In May, FDA approved use the Guardant 360 CDx as a companion diagnostic for Janssen Pharmaceutical’s Rybrevant, metastatic non-small cell lung cancer.

NeoGenomics is focused on precision oncology and offers a comprehensive menu ranging from traditional to state-of-the art testing to support a personalized testing approach, providing tailored and targeted diagnostics for cancer patients. In May, NeoGenomics reported its plan to acquire Inviata for about $390 million. Inviata has developed the InVision platform based on research from the Cancer Research UK Cambridge Institute at the University of Cambridge. Its lead product, InVisionFirst-Lung, is commercially available and was developed to provide molecular insights that enable clinicians to make more informed treatment decisions for patients with non-small cell lung cancer.

Research analysts do tend to enjoy playing the "what if...?" game, however, and the rumored deal between Guardant and NeoGenomics prompted a report from Mike Matson, a medtech analyst at Needham & Co. While Matson acknowledged that the rumored deal was not likely to happen, given the adverse stock reaction from Guardant investors, he pointed out that there would be at least one clear benefit to Guardant if it did acquire NeoGenomics. That benefit is that Guardant would be able to sell its liquid biopsy tests through NeoGenomics' extensive distribution channel.

Matson noted that NeoGenomics has a U.S.-based commercial team of about 100, a large customer base (more than 1 million tests sold and more than 600,000 patients tested every year), deep partnerships with hospitals and oncologists, and extensive test menu (about 750 tests). The analyst also said, however, that there would be some overlap with NeoGenomics' three liquid biopsy offerings.

If Guardant did pursue a takeover of NeoGenomics, the timing would have been interesting given the ongoing consolidation of the liquid biopsy market, especially between Illumina and Grail. Illumina spun out Grail in 2016, but last year the company declared its intentions to buy it back. Antitrust regulators in the United States and Europe scrutinized the deal, but Illumina thumbed its nose at them, saying it would complete the acquisition anyway, but keep the companies separate until FTC in the United States wrapped up its investigation. Now, both companies are facing hefty fines from the European Commission, which said that this is the first time two companies have openly implemented their deal during an open antitrust investigation, blatantly ignoring the standstill obligation.