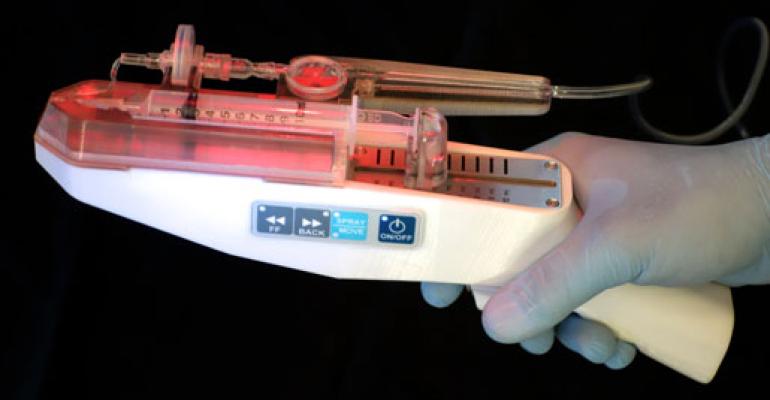 Medtech startup RenovaCare has developed a device to spray stem cells on burn injuries in an effort to regrow new skin. Here&#39;s the latest on the company&#39;s progress.

Medtech startup RenovaCare has developed a device to spray stem cells on burn injuries in an effort to regrow new skin. Here's the latest on the company's progress.

Burn victims whose injuries require skin grafts face a long recovery even when the procedure is successful. Removing skin from one part of the body and transplanting it to injured area leaves the patient with two sites that need to heal. Grafted skin can restrict joint movement, as it is unable to grow with the patient. The procedure also leaves scarring and patients typically need physical therapy afterward.

Medical technology startup RenovaCare is trying to overcome the drawbacks of skin grafts by harnessing the body's own regenerative abilities. The RenovaCare procedure requires a tiny skin sample, about the size of a postage stamp, which is used to isolate the patient's stem cells. Those cells are suspended in solution and gently sprayed on the wound. Within days, those cells will form new skin that looks and functions as the patient's original skin, CEO Thomas Bold explained.

"It's new [technology], but it's old," he said. "We're using nothing more than the body's own ability to regenerate."

RenovaCare has a small headquarters in New York and a lab in Pittsburgh. Bold is based in Berlin, Germany, where he previously worked as CEO of StemCell Systems, a company that was researching how bioreactors could be used to grow skin cells. Bold said StemCell Systems could not get the cells to migrate from the bioreactor to the wound. The company decided to try using the wound as the bioreactor for these cells. The challenge was applying the cells to the wound. Bold found the technology he needed in the United States.

Formed in 2013, RenovaCare initially tried to use currently available spraying technologies, which push fluid through a nozzle. But Bold said that the turbulence and shearing forces of pushing fluid through a tiny hole damaged stem cells. Three years ago, RenovaCare acquired the SkinGun, a sprayer invented by Jorg Gerlach, a professor of surgery at the University of Pittsburgh. When RenovaCare purchased the technology from Gerlach, the sprayer was not yet technologically feasible, according to regulatory filings. The company's research efforts made the SkinGun viable; Bold now claims that more than 95 percent of stem cells applied with the device survive the spraying procedure.

A key advantage for RenovaCare's technology is time. The procedure takes about 90 minutes and can be done at the same hospital where a patient is treated, said Richard Simman, a plastic surgeon practicing in Dayton, OH. Simman is also a RenovaCare advisor, and he said that advisory board members were offered stock in the company. Skin graft procedures involve harvesting skin, which is then sent to a lab to be formed into cultured sheets--a process that can take weeks. That contrasts with RenovaCare's approach, in which stem cells can be prepared while clinicians clean debris from a wound. By the time that's done, Simman said, the stem cell solution is ready for application.

"I think it's going to be a revolutionary technology, mainly with the ability of surgeons to learn how to isolate and prepare this stem cell suspension on site in the hospital," he said.

Bold said RenovaCare's technology has treated dozens of burn patients in Berlin and Pittsburgh, experimental studies that were performed separately from the company. For FDA clearance, RenovaCare must conduct its own formal studies to demonstrate safety and efficacy. RenovaCare's 2015 annual report stated a goal to submit a 510(k) application this year seeking clearance for a "medical-grade liquid sprayer." But in an interview, Bold would not commit to timelines for clinical trials or FDA submissions. And in the annual report, an independent auditor raised doubts about RenovaCare's ability to continue as a going concern. 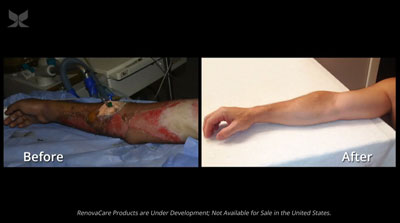 Before and after images of a police officer whose burn injuries were treated with RenovaCare's technology.

RenovaCare spent just over $281,000 for research and development last year, down more than 71 percent compared to 2014. The company reported a $1.3 million net loss in 2015. RenovaCare has financed its R&D through private placements, raising more than $1 million from five investors last year, according to filings. The company reported having $276,147 in cash and cash equivalents at the end of the second quarter. RenovaCare is "in the process of getting more money into the company," Bold said.

In the meantime, several companies are also developing or have already commercialized skin regeneration technologies. Canton, MA-based Organogenesis, for example, markets Dermagraft, a technology originally developed by Shire that uses bioengineered skin grafts to treat diabetic skin ulcers. But the product most closely resembling RenovaCare's SkinGun might belong to Avita Medical, an Australia-based company whose ReCell technology also uses a cell isolation procedure and cell spray application device. ReCell has CE Mark approval in Europe for burns and plastic reconstructive procedures but the technology is still investigational in the United States.

Avita announced in July that it had raised more than $9 million to support a clinical trial in burn patients, as well as regulatory work toward FDA pre-market approval. Avita also has a five-year contract with the U.S. Biomedical Advanced Research and Defense Authority that could award the company up to $53.9 million to develop ReCell for a mass casualty scenario involving burn injuries.

While RenovaCare is keeping an eye on what it needs to do for a CE Mark in Europe, Bold said that the company's initial focus is commercializing the technology in the United States. If the company is able to secure FDA clearance for treating burns, he added that the technology could later be developed and tested for treatment of other skin conditions and injuries.