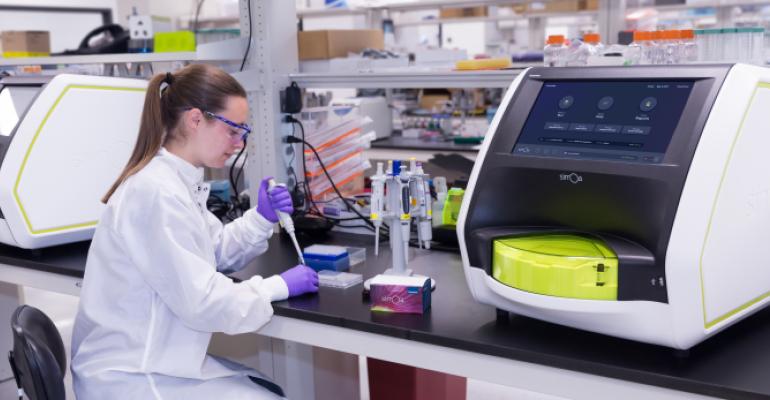 Quanterix teams up with DestiNA to develop assays to detect liver toxicity in patients.

Quanterix has formed a collaboration with DestiNA Genomics to explore the use of the single molecule array approach for the detection of microRNAs. The collaboration will combine Lexington, MA-based Quanterix’s SR-X Ultra-Sensitive Biomarker Detection System with DestiNA’s technology.

“We think teaming up with DestiNA makes a lot of sense to build out some assays that will further increase the capability of our SR-X platform that we launched in December,” Kevin Hrusovsky, president and CEO of Quanterix, told MD+DI.

The two companies will first focus on the development of a nucleic acid assay for direct detection and quantification of the liver toxicity biomarker microRNA-122.

“We’ve had a lot of interest from doctors wanting to have a better biomarker or better way to see liver toxicity early,” Hrusovsky said. “Many of today’s drugs can have a deleterious effect on the liver. We really want to make sure that we have the earliest warning indication of any harm that is being brought to the liver."

The collaboration will allow both companies to be able to detect microRNAs from serum and plasma without the use of a Polymerase chain reaction-free approach.

Join us at the BIOMEDevice Boston Expo, April 18–19, 2018. Use promo code "MDDI" for 20% off conference registration and free expo access.

“PCR is very expensive and very complicated,” he said. “PCR really has some biases and false positives that it can create. If you can eliminate all those things quicker with less expense, it just opens up our technology for a whole new set of customers that really weren’t pursuing our technology.”

Quanterix is just coming off some very large milestones. In December, the company raised $74 million in an IPO and has a gross valuation of about $275 million. In January, the company acquired Billerica, MA-based Aushon Biotechnologies in an effort to boost its menu offerings.

“Aushon had a much broader menu of 250 different assays,” Hrusovsky said.

Quanterix has also been successful in generating revenue. Earlier this month, Quanterix disclosed it earned $22.9 million in 2017, a 30% increase over the $17.6 million it raised in 2016.

Illumina Is Minding Its Ps and Qs for IVDR Compliance
Jun 15, 2022