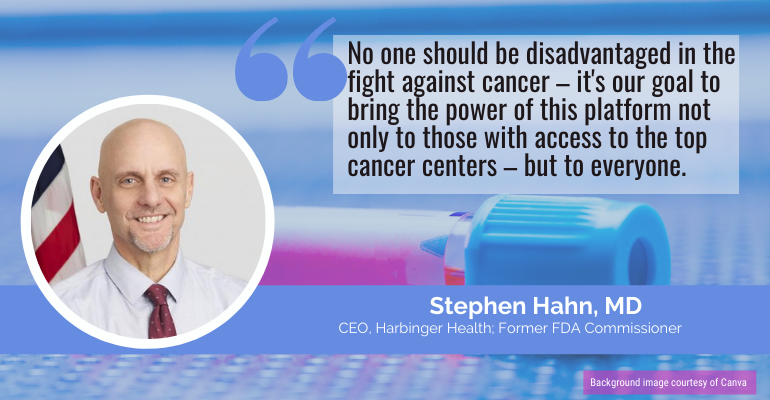 The former head of FDA will lead a new, high-tech cancer testing company that just emerged from stealth mode.

After three years of R&D, Harbinger Health emerges from stealth mode with $50 million of committed captial, and a high-profile CEO.

Former FDA Commissioner Stephen Hahn, MD will lead Harbinger Health, a startup backed by Flagship Pioneering. The company is developing a blood test that combines artificial intelligence (AI) and machine learning with its recent discoveries about the biology of early cancer. By using this bio-AI approach, Harbinger Health says its HarbingerHx platform has the potential to create an entirely new paradigm for cancer diagnosis, enabling early therapeutic interventions or prevention.

Hahn, who joined Flagship earlier this year as chief medical officer of the firm's Preemptive Medicine and Health Security Initiative, will now become a Flagship CEO-Partner as well as CEO of Harbinger.

"Harbinger Health is poised to redefine our approach to oncology, moving beyond cancer 'staging,' and toward early detection that enables the diagnosis and treatment of cancer, and ultimately to effectively reduce morbidity and mortality associated with the disease," Hahn said. "We are committed to developing our platform so there is access to early cancer detection for all individuals with a simple test. No one should be disadvantaged in the fight against cancer – it's our goal to bring the power of this platform not only to those with access to the top cancer centers – but to everyone."

Hahn served as chief medical executive at MD Anderson Cancer Center in Houston prior to his FDA appointment. Prior to his role as chief medical executive, he served as deputy president and chief operating officer. In that role, he was responsible for the day-to-day operations of the nation’s top cancer center, which included leading more than 21,000 employees and overseeing a $5.2 billion operating budget. He was elevated to the chief operating officer role after serving as division head, department chair, and professor of radiation oncology. Prior to his executive leadership roles at MD Anderson, Hahn was the leader of radiation oncology at the University of Pennsylvania’s Perelman School of Medicine.

"Steve Hahn has been instrumental in Flagship's Preemptive Medicine and Health Security Initiative, which is creating a new field that aims to protect, maintain, or improve people's health before they get sick," said Noubar Afeyan, PhD, founder and CEO at Flagship Pioneering. "Leading Harbinger Health is the natural evolution of that work. I'm thrilled that [Hahn], a recognized oncologist and leader in medical research, as well as a former FDA commissioner, has joined as CEO-Partner to lead the launch of Harbinger Health."