Early Detection of HIV May Be as Easy as Spitting 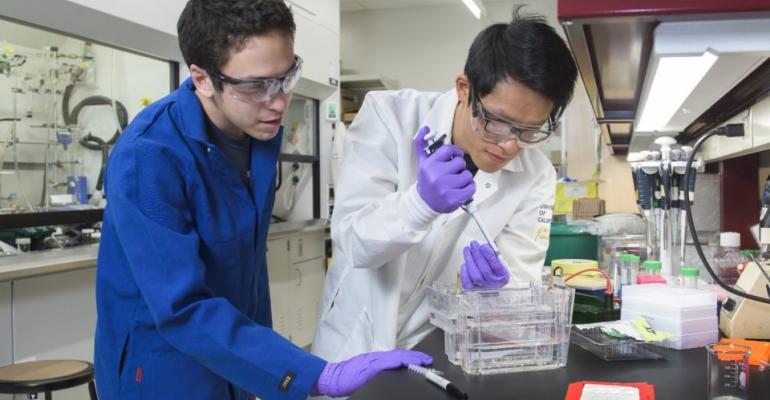 Cheng-ting “Jason” Tsai, a graduate student in the Stanford University lab of Carolyn Bertozzi, and Peter Robinson, a former graduate student of Bertozzi’s, work on an earlier version of their test.
Stanford researchers aim to simplify HIV testing and boost early detection rates through a saliva-based test.

When it comes to HIV screening, healthcare workers often have to make a choice between using a reliable, albeit time-consuming blood test — or a simple, less accurate saliva test. The blood test is much more reliable at detecting signs of infection, but health officials often have a difficult time getting patients to volunteer blood. The other alternative is to rely on oral fluid-based tests that, while quicker and simpler, are frequently inconclusive because HIV antibodies accumulate at lower levels in saliva.

A group of researchers from Stanford hope to change that with a new saliva-based test that combines the convenience of spitting into a cup, with the reliability and accuracy of a blood test. Carolyn Bertozzi, professor of chemistry at Stanford and leader of the lab where the test was developed, says the new test uses a polymerase chain reaction (PCR) based detection method to detect the markers of infection.

“The ADAP test essentially translates detection of anti-HIV antibodies, which are markers of infection, to PCR-based detection of DNA, which is a very sensitive technique,” Bertozzi said. “We start by chemically linking pure HIV proteins to synthetic DNA. Then we use these reagents as probes for the presence of antibodies in oral fluid that bind to the viral proteins. Those antibodies will only be there if the person has been infected with HIV.”

Bertozzi said that when these antibodies bind to our protein-DNA conjugate, the two arms of the antibody bring two DNAs close together in space. An enzyme can then be added that can stitch the two nearby DNA molecules together so that the DNA can be amplified by PCR for detection. She says that the new assay is thousands of times more sensitive than current saliva-based assays that aim to detect the same antibodies.

While the method of using saliva to detect HIV has been around for nearly two decades, tests have remained largely unreliable due to the low abundance of antibodies in saliva. Bertozzi says that a saliva-based test would not only be simpler but would be quicker and safer for healthcare workers.

“Oral fluid is simpler to collect if one is doing a large public health screen,” she says. “It also makes testing cohorts that are hard to take blood from, like kids and adolescents, much simpler. Also oral fluid is not infectious, unlike blood, and therefore is not risky for healthcare workers to collect and handle. Currently, there is a commercial oral fluid test for HIV, but it is not very sensitive and can not detect the low levels of antibodies in oral fluid until 40 days after infection. Since blood has much higher levels of antibodies, people still use that as the go-to fluid for early detection, but with the above drawbacks.”

Although the group believes that the new test will require more studies to confirm results, initial studies have shown very promising results. In a pilot study, the test correctly diagnosed 22 people with HIV who took part in a screening effort, each of whom had previously tested positive using other methods. The test also did not present a single false-positive in the 22 additional HIV-negative participants in the study.

“Our pilot study indicates that the test could be highly specific and sensitive,” said Cheng-ting Tsai, a graduate student in Bertozzi’s lab and lead author on the paper describing the work. “The specificity comes from the fact that we can simultaneously detect many anti-HIV relevant antibodies in a single assay. This gives us a better confidence in determining whether the individual is infected. The pilot study shows 100% specificity and sensitivity using 44 saliva samples.”

Tsai says that the evidence gathered so far fosters a belief that there is real potential for the new test. While future studies are in the works to further validate the method, the group remains confident that a reliable saliva-based test such as this could go a long way towards identifying HIV earlier and ultimately preventing patients from spreading the virus.

“We need to automate the test so as to be able to process large sample numbers quickly,” Bertozzi said. “We need to keep pushing the limits of sensitivity to compete directly with blood tests. We think we can make an oral fluid test that is just as sensitive as the current blood test for anti-HIV antibodies, which could improve large-scale screening efforts. Testing and intervention at the public health scale is still the most effective tool for curbing the HIV epidemic.”