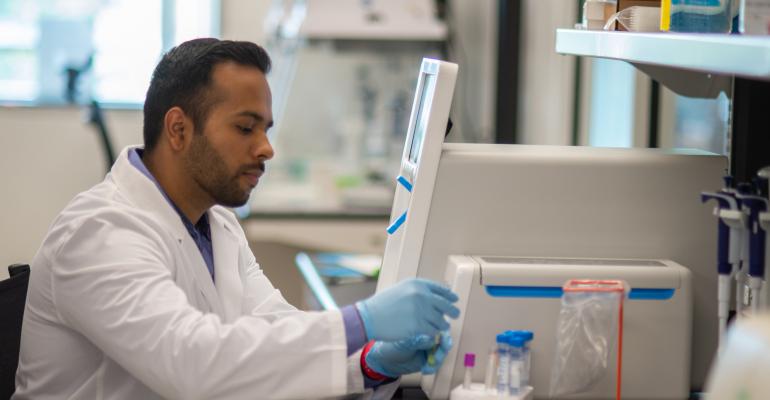 Images courtesy of LexaGene
LexaGene's automated screening technology for 22 known pathogens may also be able to help identify an unknown one.

Today’s molecular diagnostics testing typically involves either manual processing at a reference laboratory or automated processing by preconfigured instruments in near-patient settings, Dr. Jack Regan, CEO and founder of LexaGene, tells MD+DI. Neither approach would be ideal for detecting a highly infectious novel pathogen, he warned. The inability to rapidly configure a near-patient instrument to identify a newly emergent pathogen could result in delayed detection and increase the risk of the disease spreading. Some healthcare experts fear that such delays could lead to a pandemic that could claim thousands of lives.

Regan believes an open-access analyzer could help clinicians rapidly identify deadly novel pathogens. To that end, his company has developed new open-access technology that can be rapidly configured to detect newly emergent pathogens. This technology is also capable of screening samples for up to 22 pathogens at once, delivering results in about 1 hour, the company reported. The open-access feature allows users to load their own PCR assays onto the instrument for any genetic target of interest.

“LexaGene will sell three types of reagent panels—ones that are fully validated so customers will have high confidence in performance, others that are for open-access use and accordingly only contain the controls, and the third type being a blend of the first two,” Regan said. “The panels that allow for open-access use require the end-user to follow instructions on how to load their own pathogen-specific assays into the reagent panel. This way they have full control over customizing the instrument to screen for only their targets of interest.”

Regan described the length of time required for today’s approach to detecting pathogens in human samples. “Two main methods are currently used, namely culture and manual PCR,” he explained. “Culture is the process of growing up bacteria in an enriched broth, followed by mass spectrophotometry for pathogen identification, followed by a secondary culture to determine if the identified pathogen is resistant to any antibiotics. This process is > 48 hours. In contrast, manual PCR can be much faster, but it requires that highly skilled scientists extract and purify the genetic material from the collected samples, set up a series of tests, and analyze the data. Collectively, this work takes hours and is prone to error due to its complexity.”

LexaGene is commercializing its automated technology to remove the complexity of performing PCR analysis and to shorten the time to result. “To operate LexaGene’s technology, the person collecting the sample needs to merely load the sample and a disposable cartridge onto the instrument, enter a sample ID, and press ‘go.’ The instrument then performs all the necessary functions and reports back a result in just one hour,” Regan said.

He believes that the LexaGene technology is critical to help prevent a pandemic, the risk of which he details in the article, “A Call for Open-Access Molecular Diagnostics,” published in Hospital and Healthcare Management. “In this article, I argue that open-access point-of-care automated pathogen detection devices are desperately needed to help avert the next pandemic,” he said. “LexaGene’s technology can be very quickly configured to detect newly emergent pathogens—such that both strains capable of causing a pandemic and typically circulating pathogens can be simultaneously identified to allow for front-line healthcare providers to rapidly triage patients in emergency rooms settings (i.e., place patients infected with deadly pathogens into quarantine to reduce the spread of the disease).”

He explained how the reagent panel that screens for 22 known pathogens could also help identify an unknown one. “These pathogen tests are split across 11 reservoirs of the reagent panel, which has a total of 15 reservoirs. One of the reservoirs is reserved for negative controls, leaving 3 reservoirs that are essentially unused,” he said. “In the event of the emergence of a new pathogen that starts killing people, the CDC or another group would sequence the pathogen and share the sequence with the public (biotech and diagnostic companies like LexaGene). Our bio-informatics scientist would use this sequence to design a test that is specific to the new deadly pathogen. This new test can be ordered and delivered directly to the hospitals operating our technology. The hospital would receive the new test and follow the instructions to load it into one of the three unused reservoirs. The LX technology would then screen samples for the 22 common pathogens plus the new deadly pathogen, providing critical information for front-line healthcare providers who would be overwhelmed with individuals concerned that they have the deadly strain. Knowing whether they are infected within 1 hour would allow healthcare providers to quickly quarantine infected individuals to minimize the risk of disease spread.”

The LX analyzer’s capabilities could also prove useful in day-to-day medicine. In fact, the company has installed a beta prototype at Assurance Scientific Laboratories (ASL), a certified reference laboratory specializing in providing clinical testing results to physicians nationwide. The lab processes more than 300 urine samples per week for human urinary tract infections. During the beta trial, LexaGene’s analyzer will be evaluated for its ability to test urine samples for the presence of pathogens causing urinary tract infections and to determine if any detected pathogens possess genetic markers for antimicrobial resistance.

“During this beta test period, ASL will take advantage of the open-access feature of LexaGene’s LX technology to compare our tests to their tests for pathogen identification and antimicrobial resistance characterization,” Dr. Nathan Walsh, LexaGene’s VP of applications and bio-informatics, stated in a news release. “The research data generated will help clinical laboratories better assess the available tools to aid in the diagnosis and treatment of human urinary tract infections.”

LexaGene plans to start its pursuit of FDA 510k clearance in the summer of 2020. When asked for what indication the FDA 510(k) clearance application would be, Regan said it is still to be determined but potentially will be Clostridium difficile, which infects 250,000 per year in the United States and kills 14,000. “This disease is estimated to contribute to $1B in excess medical costs per year in the U.S.,” he said, adding that “although getting FDA clearance takes time, in the interim, LexaGene’s technology can still be purchased by directors of CLIA laboratories, who can self-validate the technology and use it for clinical purposes.”

He added that the company anticipates “selling our analyzer into open-access markets that desire easy-to-use technology that can be customized. Examples of open-access customers include biotech and pharma companies as well as reference laboratories servicing both veterinary and human clinical diagnostic needs.”