Could a New Biosensor Be Able to Smell Cancer? 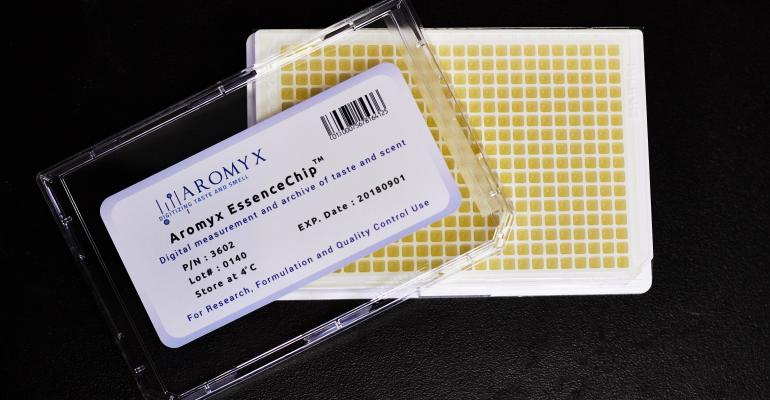 Image of the EssenceChip courtesy of Aromyx Corp.
Aromyx Corp. announces its groundbreaking biosensor technology based on the human sense of smell and taste. The company says the new technology has the potential to be used as a diagnostic tool to detect early stage cancer and disease.

Researchers from Aromyx Corp. announced this month that the company’s flagship technology, the EssenceChip, will be made available to select partners by the end of this year. The new biosensor technology was designed to work with a digital platform that can measure the human sense of smell and taste by placing olfactory receptors from the nose onto a disposable biochip that can then produce a digital readout.

Aromyx Corp. founder and CEO Chris Hanson says that the new biosensor technology was developed using the human sense of smell and taste as a blueprint to create a digital capture of the human senses.

“Our technology is based on the human sense of smell and taste,” Hanson said. “Aromyx has built a solution for the digital capture of smell and taste by placing olfactory and taste receptors from the nose and tongue onto a disposable chip, with a digital readout. We then apply artificial intelligence to the resulting data to give customers insights that are unobtainable with other technologies.”

Hanson said that although previous academic institutions and companies have worked with a limited number of receptors in the past, they have relied upon using live cell lines that have to be kept in well equipped laboratories. The key difference with the EssenceChip is that it utilizes a simple product with no live cells, so that it can be used anywhere in the world. Whether it’s used to detect ingredients in coffee or tea, or as a diagnostic tool to detect disease, the EssenceChip has the potential to impact both the medical and consumer product industries.

“Imagine if you could deliver higher yield drugs at a cheaper cost or detect cancer with a simple breath," Hanson said. These are a few of the applications that the EssenceChip technology can enable, he said. "We are entering the market with a focus on quality control and manufacturing yield improvement in both pharmaceuticals and consumer goods,” he said.

The genesis of the technology actually dates back to the 1990s when the Defense Advanced Research Projects Agency (DARPA) attempted to create a “digital dog-nose” technology that could be used to sniff out improvised explosive devices, known as IEDs, and their component explosives. The project also hoped to produce a technology that could detect mustard gas, Sarin, and various nerve agents, but the breakthrough for Aromyx actually came when they switched to human receptors.

In the following years, several different studies began to explore the ability for dogs to detect a variety of different diseases. The studies found that olfactory receptors could actually detect unique biomarkers for certain diseases. Armed with this information, Aromyx set out to develop a technology that could digitally capture the sense of smell and taste to scan for these unique biomarkers. The result was an exciting new technology with unprecedented capability.

“We think the Aromyx technology could provide inexpensive, noninvasive, and real-time diagnosis of a wide range of diseases at early stages,” Hanson says. “We are working on this with Dr. Brett Sheridan, chief of surgery at California Pacific Medical Center in San Francisco, and with Dr. Danny Dhanasekaran, director of the Center for Basic Cancer Research at the University of Oklahoma Stephenson Cancer Center.”

Hanson said that the company believes the technology could be used in research applications by the middle of next year, which is when the company hopes to make the EssenceChip widely available. For now, the company is offering early partners eval units in an effort to begin working with the chip and platform. Eventually, the EssenceChip would need some level of FDA approval before being used as a widespread clinical diagnostic tool — something the company will continue to explore in the months ahead.