Will Google’s Smart Contact Lens See the Light of Day? 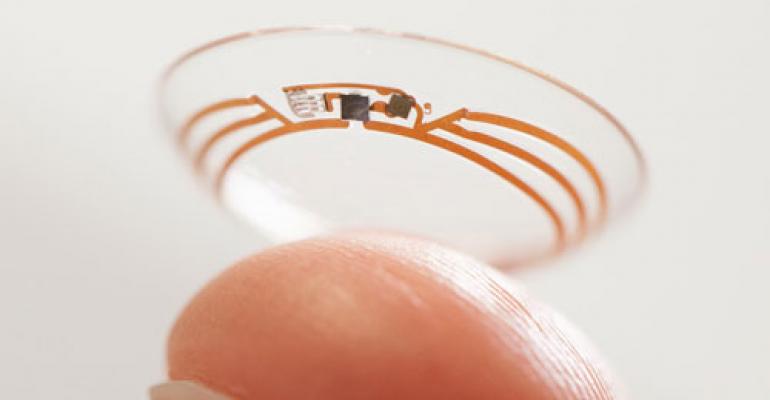 Google is venturing into the medtech space with its smart contact lens. But it faces several daunting challenges on its path to commercialization.

Google has been anxiously pacing the medtech sidelines for some time. Notably, the company dabbled in personal health records through the now-defunct Google Health, watched its Google Glass transform surgery, and, most recently, launched the health and wellbeing-focused company Calico. With the recent unveiling of the Google[x] smart contact lens project, however, the company has officially stepped onto the field and is ready to play ball.

Following rampant speculation spurred by a meeting between FDA and several Google[x] employees, Google revealed in a blog post that the semisecret lab is pursuing the development of a smart contact lens that uses miniaturized electronics to measure glucose levels in tears. The device can also double as a corrective lens and may potentially feature LED lights that provide a warning if glucose levels rise above or drop below established thresholds.

If realized, the increased monitoring frequency and elimination of finger pricks promised with Google’s smart lens could be a differentiator in an underpenetrated market. “The U.S. market for glucose monitoring devices is over $5 billion, but over 95% of patients use self-monitoring, while fewer than 5% utilize CGMs,” Messenger states.

And the novel technology coupled with the name recognition of Google could bode well for adoption—especially if the comments on the popular DiabetesMine blog are any indication. Commenters were downright effusive in their praise for the project; some even volunteered for clinical trials.

But Google’s future in the diabetes space is far from secure.

Chris Spivey, senior editor at BCC Research, for example, is highly skeptical of the device. In addition to pointing out that patients might remove the lenses at night when they need monitoring most, Spivey questions the use of human tears to measure glucose levels as well as the use of photosensor technology. "The high water content of tears presents severe challenges for mid-IR approaches to be accurate due to rapid attenuation," he notes.

“Even if Google somehow got all of [these issues] right, and even if tears are biologically relevant information, the diabetic patient cornea is very soft compared to healthy individuals, so a contact lens is likely to scratch and tear this vulnerable tissue,” Spivey says. “This approach is therefore a nonstarter from the beginning of the concept.”

DRG’s Messenger agrees that Google faces some significant hurdles on the path to commercialization; however, he feels more optimistic about the device’s prospects. “There will be two challenges for Google in bringing this device to market,” he says. “First, the company will need to ensure that the device is priced economically, so that it can be fully reimbursed by insurance providers; insurance coverage for CGMs is always a challenge for competitors in this space. Second, Google will need to fully develop and refine the communication between the lens and an insulin pump in order to create a closed-loop system with the intention of competing with ‘artificial pancreas’ devices that are starting to reach the market. If Google can overcome these challenges, then its smart contact lens will revolutionize glucose monitoring for diabetes patients.”

That’s a pretty tall order for Google—and an eye opener for established diabetes device companies. That’s because Google’s foray into medtech could spell opportunity for some companies; Otis and Parviz noted in their blog post that they will seek experienced partners. But it could also be a substantial threat to market leaders if Google actually went to market with a closed-loop system. After all, Google[x]’s smart contact lens project will benefit from the corporate giant’s unparalleled name recognition, reputation, and resources.

We’ll have to wait and see whether the smart contact lens project is more akin to Google Health or Google Glass. One thing is certain, however: The medtech industry will be keeping a close eye on this project.