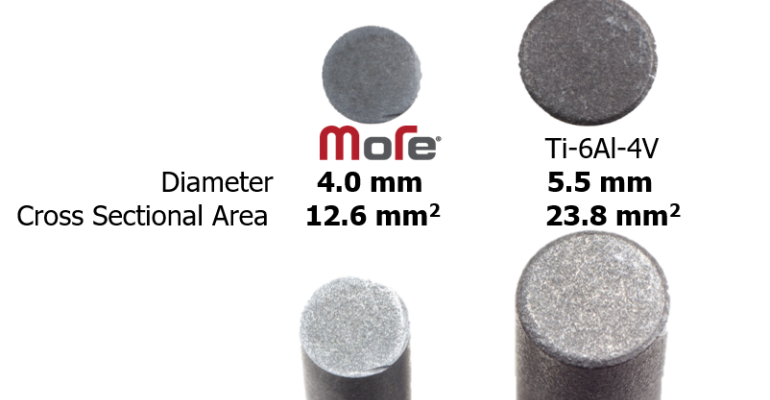 Image courtesy of MiRus
The medical device company is focusing on creating innovative orthopedic implants made from its proprietary new superalloy as well as developing new technologies such as a spinal alignment monitoring system and preoperative and postoperative monitoring tools.

“We're always trying to solve meaningful problems,” said Jay S. Yadav, MD, founder and CEO of MiRus, in an interview with MD+DI. Yadav formerly founded CardioMEMS, which created the first wireless cardiac implant, among other companies, and he has always been interested in creating better materials for all types of devices. MiRus, his latest venture, is focused on the orthopedic world, at least for now.

“Several years ago we were searching for better alloys for cardiovascular implants and were fortunate to collaborate with metallurgists that had previously worked with NASA on advanced materials,” Yadav said. One of the materials was molybdenum rhenium, he said, explaining that it took many years to turn it into a medical alloy, which MiRus has now done, with MoRe.

“For multiple reasons, molybdenum rhenium is much stronger and much more fatigue resistant than titanium or cobalt chromium, which means that we can make devices that are taking up less space in the human body, interfering less with soft tissue envelopes,” he said.

The other consideration in choosing an optimal material, Yadav said, is that it should have an excellent biological profile. “MoRe is much more hydrophilic, and hydrophilicity is a key determinant of the tissue response,” he said, noting that it is twice as hydrophilic as titanium. Additionally, it has excellent osteointegration properties, and it has very low levels of ion release. “In addition to spine, it is suited for a variety of applications including joints, extremities—as well as areas outside of orthopedics such as dental and cardiovascular,” Yadav said.

“In areas with limited soft tissue, you want the thinnest plate possible, and we can make plates that are roughly half the thickness of current foot and ankle plates or wrist plates, for example,” he continued. “We really wanted materials that are functionally and biologically better, which is what we have here. It's a platform that we can apply to every orthopedic implant.”

MoRe can be manufactured using existing techniques. MiRus has also recently expanded its own manufacturing capacity with the addition of a fully operational 50,000-sq-ft orthopedic and spine facility in Marietta, GA, which has 32 CNC machines.

MiRus also recently received FDA approval for its Galileo spine alignment monitoring system, which is a nonoptical, wireless, real-time measurement system for segmental and global sagittal spine alignment. Yadav said that he asked spine surgeons what issues they were facing in surgeries, and what their unmet needs were. “And a lot of things came—up better implants, better navigation, and, specifically it is hard for them to actually measure sagittal balance and spine alignment during surgeries,” he said. “They really had no good tools to do that.”

Measuring the sagittal balance is crucial because spinal surgeries can sometimes lead to flat back syndrome, in which the lower back loses some of its curvature. This can lead to the patient having trouble standing up or experiencing lower back or leg pain. Yadav explained that Galileo works by using one or two sensors, depending on the length of the surgery, that have orientation-sensing modules on them. “At the beginning, you take one lateral x-ray and register them, and then Galileo will continuously measure and output sagittal alignment.”

MiRus has also recently received approval for its CYGNUS anterior cervical plate system, and the company is continually working on more implants, as well as preoperative planning and assessment tools, a navigation and robotics system, and postoperative monitoring and risk mitigation products.

“We’re taking a comprehensive approach to fix some of the current problems in healthcare delivery, both for the benefit of the patient as well as the healthcare system,” Yadav concluded.