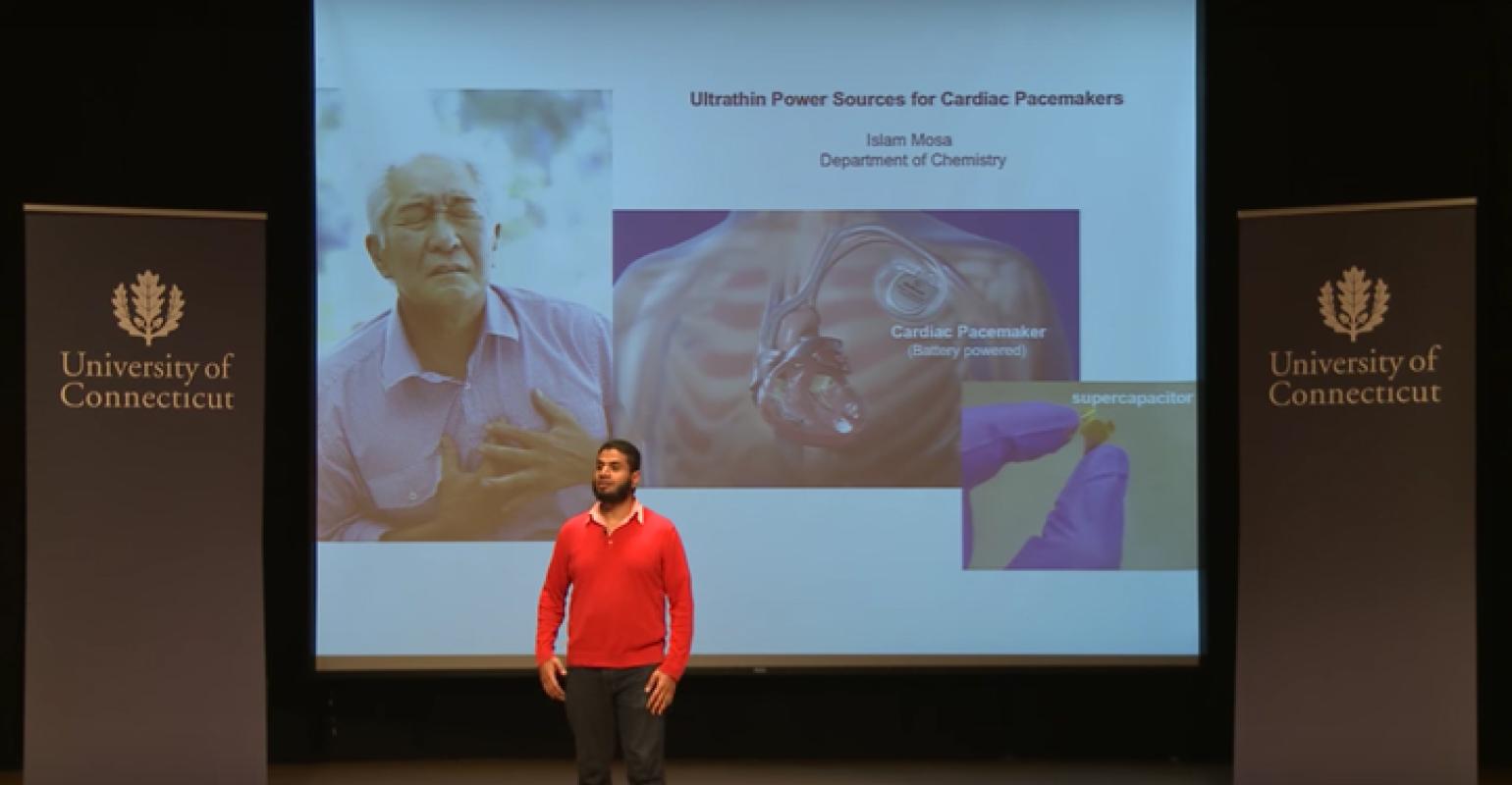 UConn's Islam Mosa explains his supercapacitor. Watch the YouTube video here.
Researchers are pioneering technology that could converge to enable pacemakers to be powered by longer-lasting sustainable energy.

One of the great "meta" areas of investigation for the scientific community is how to attain greater efficiency in sustainable energy creation and storage, from solar power arrays to car batteries to batteries for mobile phones and laptops.

To the quest for greater sustainability in these industries one can add cardiac pacemakers, and one pioneer of the technology says it could be ready for trials sooner rather than later.

"It's not far," M. Amin Karami, PhD, director of the Intelligent Dynamic Energy and Sensing Systems Lab at the State University of New York at Buffalo, said. "We can have the technology ready for animal tests and maybe even for human trials, in two years."

Karami supervised work by UB doctoral student Hooman Ansari, in which Ansari and colleagues recently created a piezoelectric energy harvester that converts the heart’s vibrational energy into electricity. The work, which was published in Smart Materials and Structures and the Journal of Intelligent Material Systems and Structures, is but one of several recently published experiments that illustrate the overall quest for sustainable systems has reached critical mass in cardiac device research. In fact, Karami came to the field through his earlier work on larger-scale energy harvesting systems, in aviation and bridge safety in particular.

In addition to the UB work, other recent advances include:

The pursuit of longer-lived energy systems in pacemakers is especially important for patients, as procedures to replace the devices introduce risks for complications that more efficient—or, ideally, indefinitely sustainable devices—would not. In fact, British cardiologists John Dean and Neil Sulke, in a 2016 article in BMJ, called the current practices of replacing batteries in cardiac pacemakers and implantable defibrillators a "scandal," suggesting that with existing technology, engineers could design and build pacemakers that would last for 25 years or more.

How the researchers' new technologies may be integrated in the next steps of investigation presents intriguing possibilities. For instance, Mosa said the next step of his team's research will be to create an energy harvester that will work in tandem with the supercapacitor. He is considering several possibilities, including a thermoelectric device that would convert body heat to energy, and two piezoelectric approaches: one that would provide power to the storage device from a harvester implanted near a moving joint, and the other a heart-located approach similar to Ansari and Karami's version. Such a coupled device, Mosa thinks, would still be only about 1 centimeter square and only 11-15 microns thick, or slightly thicker than hair. He says it's an exciting time to be pursuing this type of research, and sees others' work as complementary more than competition.

"No, I don't think of it as competition," he said. "It's more like we need each other to complete this."

And, Karami said, he is already hearing interest among cardiac patients for devices like this.

"In the past, people have contacted us—I'm serious—and said, 'I want to go for my next pacemaker—should I wait?'" he said with a laugh. "Obviously, no. It wont happen earlier than five years at least, to be absolutely optimistic. But technologywise, we're not far."