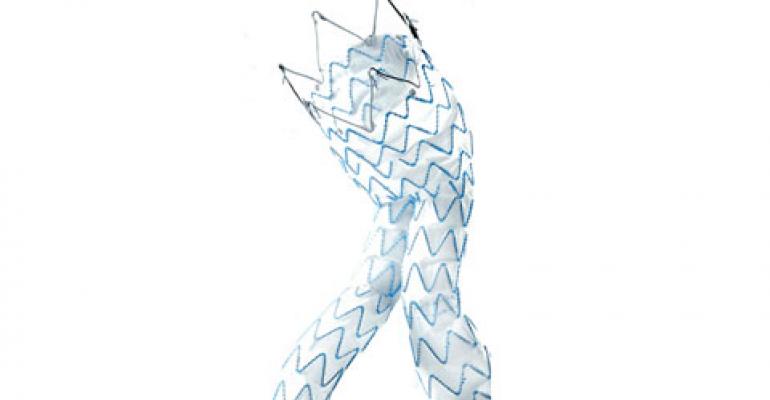 An investment and acquisition announced by Medtronic this week show the company is committed to keeping its aortic and peripheral vascular division growing at a fast clip.

Medtronic’s aortic and peripheral vascular business has been among its fastest-growing divisions for the past five years, according to the company, and the Dublin, Ireland-based device maker seems motivated to ensure that pace doesn’t slow anytime soon.

On Wednesday, Medtronic disclosed an investment in Arsenal AAA, a subsidiary of Arsenal Medical developing technology to prevent complications associated with endovascular aneurysm repair (EVAR) procedures. The Watertown, MA-based company’s proprietary foam is intended to stabilize aneurysms and reduce the likelihood of endoleaks, which are found in up to 40% of EVAR patients both intraoperatively and during follow-up.

Medtronic didn’t disclose financial terms of the deal but did say it has secured the option to purchase Arsenal AAA after it meets certain milestones.

Two days later after the Arsenal AAA announcement, the company made another move in the aortic space. On Friday at the Society for Vascular Surgery’s annual meeting, it revealed its $110-million acquisition of Aptus Endosystems, maker of two FDA-cleared fastening devices for locking endografts in place. The Sunnyvale, CA-based company’s Heli-FX and Heli-FX Thoracic anchoring systems are intended to secure aortic and thoracic endografts, respectively. Aptus Endosystems also makes a steerable catheter for delivery of peripheral vascular products, the TourGuide Steerable Sheeth, which Medtronic will distribute.

In a press release, the company described the Arsenal AAA investment and Aptus Endosystems acquisition as “demonstrations of Medtronic’s’ commitment to leadership in the Aortic space.”

Both companies’ products complement Medtronic’s existing offerings for treatment of abdominal aortic aneurysms. Arsenal AAA’s proprietary foam will be able to be used with any commercially available endograft, and Aptus Endosystems’s fastening devices support Medtronic’s Endurant and Valient stent graft systems. Medtronic will also pursue approval of an expanded indication for Endurant with the use of the Heli-FX system, the company said.

The market for aortic stent grafts is expected to increase at a compound annual growth rate of 6.7% until 2020, when it is predicted to reach $1.9 billion, according ReportsnReports.com.

“Despite the high product price, physicians still see a significant benefit in providing endovascular options ahead of performing open surgery,” according to a press release from the market research firm.

Jamie Hartford is MD+DI’s editor-in-chief. Reach her at [email protected]