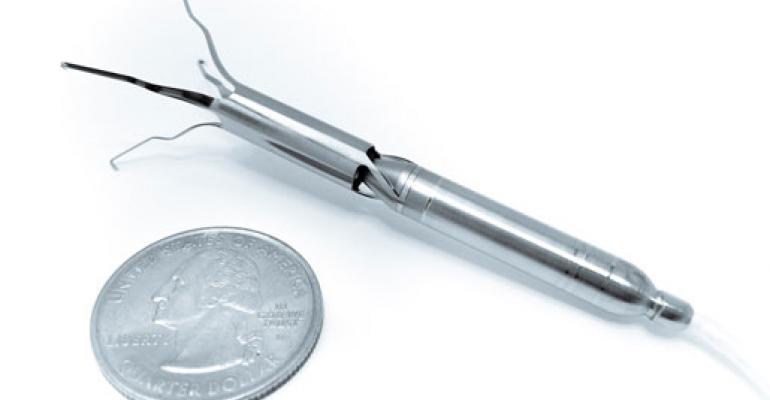 Procyrion envisions their Aortix device as a less-invasive approach that would keep heart failure patients ambulatory while under treatment.

Procyrion envisions their Aortix device as a less-invasive approach that would keep heart failure patients ambulatory while under treatment.

Even though heart failure affects approximately 6 million Americans, there are surprisingly few device treatments and procedures available for these patients. Left ventricular assist devices (LVADs) have received plenty of attention in recent years for their ability to help severe heart failure patients, but the therapy, which requires invasive surgery, can hold little appeal for people who have less severe heart failure. Yet this same population may no longer be getting satisfactory results from a drug regimen.

"These are patients [for whom] drugs aren't enough anymore, but they're not sick enough to warrant cracking their chest and doing an LVAD or a transplant," said Benjamin Hertzog, PhD, president and CEO of Procyrion. According to the company, this describes a population of more than 2 million heart failure patients.

Procyrion, the Houston, TX-based company that recently won MD+DI's 2016 Medtech Startup Showdown, is developing the Aortix system for chronic heart failure patients who fall into the New York Heart Association (NYHA) Class III and IVa categorization of disease severity, meaning they aren't yet sick enough for LVAD therapy. Aortix aims to offer the benefits of circulatory assistance without chest-opening surgery. Instead, the device could be delivery via a catheter and patients would be able to get out of bed and walk around.

Cardiologist Reynolds Delgado, III, MD, FACC, medical director of Mechanical Support Devices in Heart Failure at the Texas Heart Institute, conceived of the idea for Aortix and founded Procyrion in 2005. Delgado is now the company's chief medical officer. In 2007, Houston's Fannin Innovation Studio offered seed funding for the company. Hertzog said that in late 2009 and early 2010, while he was working with Fannin to "triage" the group's portfolio, he spotted Procyrion. "I got really excited about Procyrion and the opportunity for it, the huge clinical unmet need in heart failure and the commercial opportunity for an interventional cardiology tool for heart failure."

Aortix is a tiny device, 6 mm wide and less than 6.5 cm long, that has a micromotor on expandable struts. The pump accelerates blood flow using fluid entrainment. Hertzog explained that a cardiologist would be able to deploy the device in a quick procedure by snaking a catheter into the patient's femoral artery and into the descending thoracic aorta. From there, the pump is designed to reduce cardiac afterload and increase blood flow to organs. The pump could be powered by a flexible power wire or possibly with a subcutaneous transcutaneous energy transfer system, according to information on the company's website. According to Hertzog, pre-clinical animal studies have shown that Aortix increased blood volume by 10-15% and reduced needed cardiac energy by almost 40%, resulting in a nearly 60% increase in efficiency. Since Aortix would enhance blood flow but not fully support the heart, any unexpected device failure should not endanger the patient, unlike with VADs. The system is slated for first-in-human implants later this year.

"Dr. Delgado's original premise was, if all we have are LVADs, it's too late for a lot of these patients," Hertzog said. "If you can get to them earlier, maybe you can change the trajectory of their disease." Intervening earlier would also mean patients wouldn't need as much pumping, he added.

At least one LVAD leader has noticed the company--Gary Burbach, who was president and CEO of major VAD-maker Thoratec from 2006 to 2014, joined Procyrion's board of directors earlier this year.

There are a few main design advancements that are intended to make Aortix a less risky solution for active, ambulatory patients. The device's implant location is one--the descending thoracic aorta is outside of the heart and downstream from the carotid arteries, reducing the risk of thrombotic stroke, valve damage, or blood flow problems within the heart. The location could also be a boon to other organs, including the kidney.

Another unique design detail is the reversible anchoring technology. When the cardiologist has moved Aortix into the descending thoracic aorta, the catheter sheath is retracted to anchor Aortix to the aortic wall using self-expanding, nitinol struts. This anchor can also be collapsed, a feature that should make the pump retrievable. Hertzog explained that this technology is similar to that used in inferior vena cava filters to catch clots.

One well-known circulatory support technology that is delivered using a catheter is Abiomed's Impella products. The company has grown rapidly in recent years and Hertzog acknowledged the technology's success. However, the Impella heart pumps treat a different population, he pointed out, since they are indicated for temporary ventricular support (< 6 hours) during high-risk percutaneous coronary interventions and short term use (< 4 days) for ongoing cardiogenic shock. Aortix is intended for longer use in Class III and IVa heart failure patients and because it is designed to be anchored and implanted outside of the heart, patients should be able to walk around and be active without the risk of device migration or damage to the heart.

Manesh Patel, MD, director of the Interventional Cardiology and Catheterization Labs at Duke University Health Systems and Duke Clinical Research Institute, wrote in an email to MD+DI that Aortix's "unique ability to treat patients and eventually get them ambulatory" is what initially attracted him to the technology. Patel, who now sits on the company's scientific advisory board, added, "I think one of the ways we can return patients quality of life and reduce some of the hospital-based comorbidity is by providing therapies that allow ambula[tion] while improving their heart failure."

The company has chosen two sites for the first-in-human implants, one in Asunción, Paraguay, and the other at Duke University under FDA's Early Feasibility Study program. "The FDA is wholeheartedly encouraging the development of innovative therapies and we're glad to be participating in that," Hertzog said.

Beyond evaluating Aortix for safety and procedural feasibility, feedback from those first human implants could come quickly, possibly before the end of the year. "Our device creates a clinical signal very quickly. In the first couple minutes you're able to see changes in hemodynamics. We are going to be looking at some of those hemodynamic parameters. We'll get a good sense whether the device is working as intended or not," Hertzog said.

Hertzog explained that the biggest challenge in the medical device field is funding. "The funding environment in medical devices has continued to be challenging," he said. Procyrion has been successful so far on that front, having raised a total $13.5 million from Fannin Innovation Studio, Dallas-based Scientific Health Development, and other strategic and angel investors. The latest funding round in fall 2015 garnered $10 million, to be used for the first-in-human implants and an early pilot study, Hertzog said. A future round of financing, possibly in 2017, would be targeted at supporting the company through its first regulatory approval.

Looking far into Procyrion's future, Hertzog noted that there is already an existing reimbursement structure in the United States for percutaneous circulatory support. "That's good news for us," he said. The company's plans for regulatory approvals outside of the United States are still being determined.

"We're a small team of engineer-entrepreneurs and our real focus is innovation. We like to push the boundaries. I've got a team of like-minded individuals here and the most motivating thing you can say to us is, 'That'll never work.' We like nothing more than to prove that wrong," Hertzog said.