HomeTechnologiesImplantsKeeping an Eye on Advances in Ophthalmic Technologies
Recent
Technologies
J&J MedTech Lands Clearance for INHANCE Shoulder System
May 19, 2022
The Robot Will Do Your Angioplasty Now
May 18, 2022
XACT Is Changing the Tone of Robotics in Healthcare
May 18, 2022
Medtronic Touts Cusp Overlap Technique in TAVR
May 18, 2022

Keeping an Eye on Advances in Ophthalmic Technologies

Almost every American adult is aware of the aging baby boomer population and the panoply of obesity-related and other diseases confronting them, including diabetes and persistent hypertension. Much less known is the explosive growth of degenerative diseases of the eye, some linked to diabetes or other common baby boomer afflictions that can lead to blindness.

The good news is that the technology developed to battle these afflictions has improved enormously, especially over the last decade. Today, people approaching blindness do not have to go blind and, in fact, can rebound from blindness and see again, especially in the United States and Europe, where the most advanced technologies are available.

An aging population is much more susceptible than younger people to many health problems, including eye diseases. One in 10 Americans over age 80, for example, has vision loss stemming from age-related macular degeneration, a medical condition that results in a loss of vision in the center of the visual field (the macula) because of damage to the retina. It can make it difficult or impossible to read or recognize faces. Nearly 2 million Americans have the condition today, and the number will reach nearly 3 million by 2020, according to the National Eye Institute. (See the sidebar,  “Ophthalmic Market on the Rise.”) 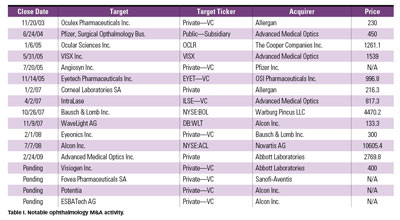 The list of patients with other eye ailments is extensive, as you might imagine. About 3.3 million Americans over the age of 40 are blind or have very poor vision because of some eye disorder.  Nearly 21 million Americans have cataracts, according to the National Eye Institute, and that will grow to 30 million by 2020. The explosion of diabetes has entered the degenerative retinal arena as well. More than 4 million Americans have diabetic retinopathy, a disease that swells the retina and severely affects people’s sight. The number of these patients has increased threefold in the past 20 years. Yet another 2.2 million Americans suffer from glaucoma.

The loss of vision exacts a bigger emotional toll than the loss of any of other sense. The loss of touch or hearing, for example, doesn’t come close. Ask someone this question: If they had to lose one of their senses, which one would it be? Nine out of 10 would say, “If I could keep my vision, I could figure out how to get around if I lost another sense. Without my vision, however, I would be lost.”

People today know more than ever about eye disease, yet there is still a surprising amount of ignorance that must be addressed. In many eye diseases, the longer a patient waits to address it, the worse it gets, and the damage is often permanent. Fortunately, this isn’t true with cataracts; despite a delay, they can be removed and replaced with an intraocular lens, and most people still see fine. This isn’t the case with many other eye diseases, however, especially diseases of the retina.

The Age of Ophthalmics

However, there is a silver lining. More people are aware of this reality, and technological advances in the treatment of eye disease have been phenomenal. Significant advances began in the late 1970s, and the pace has accelerated markedly during roughly the last decade.

Assume the year is, say, 1970, and that one of your parents had to undergo surgery to remove a cataract, a clouding that develops in the crystalline lens of the eye or in its envelope, obstructing the passage of light and varying in degree from slight to complete opacity. Surgery took two hours then and required general anesthesia. After the operation, patients were strapped down in a bed for 10 days, with sandbags strapped to each side of their head so that movement wouldn’t spark a retinal detachment. When patients recovered, they had to wear glasses that looked like the bottom of Coke bottles for the rest of their lives, and they could no longer drive at night and often not even during the day.

Today, by contrast, cataract patients go for outpatient surgery in the morning, take just a topical anesthesia, and sit through a 30-minute procedure. It takes one to two hours to recover, and the Coke-bottle glasses have disappeared. Instead, patients are outfitted with intraocular lenses that enable them to see better than they have in years. They can return to work within two days after surgery. The procedure costs about $2000 per eye, and it’s almost always covered by Medicare or private insurance.

Cataract treatment is one of many areas in which gains have been significant.

Eyeonics, a company backed by Versant Ventures, Brentwood Venture Capital, and Pequot Ventures, developed an intraocular lens that didn’t restore just distance vision but also close and middistance vision as well. A cataract operation using the Eyeonics lens costs more and patients pay the difference out of pocket, but nearly 10% of U.S. cataract patients nonetheless opt to have it done.

Another early and highly successful ophthalmic company was ­IntraLase, which developed femtosecond laser technology to improve LASIK surgery. An all-laser procedure replaces one that uses a metal blade to cut a flap on the cornea to expose the inside of the cornea to another laser for reshaping. The IntraLase procedure is more precise and safer, and vision returns sooner because the surface of the cornea remains undisturbed. IntraLase went public in 2005 and was sold to Advanced Medical Optics (now Abbott Medical Optics) in 2007.

In the last decade, the pace of ophthalmic advances has increased, with many new technologies coming from start-ups. As a result, this market segment has seen a surge in interest from venture capital companies and other investors. Below is a snapshot of the some highly promising ophthalmic start-ups.

Glaukos. The company's device, on the verge of FDA approval, helps glaucoma patients through the development of a tiny stent that is inserted inside the eye to improve the outflow of fluid into the eye’s drainage system, relieving excessive eye pressure. More than 500 patients have been treated with the so-called i-stent. Glaucoma patients will be able to eliminate or at least reduce the need for special eye drops.

Second Sight Medical Products. The company is developing a second-generation implantable device that can literally restore sight to the blind. The newer device has been implanted in more than 30 blind patients with retinitis pigmentosa in the United States and Europe. The device has enabled them to orient  themselves in their homes, walk on sidewalks, observe movement, and read letters and words. Second Sight technology will also be used to treat patients with age-related macular degeneration. The company’s technology should be approved commercially in Europe this year and in the United States late in 2011.

Acufocus. Acufocus has developed an elegant device that is implanted in the cornea of middle-aged patients. The device restores the ability to see well at near and intermediate distances, eliminating the need for reading glasses.

NeuroTech Pharmaceuticals. NeuroTech has developed a novel encapsulated cell technology that programs select cells to release a desired protein. The cells are encapsulated in a tiny, permeable tube allowing release of the protein, as well as the flow of nutrients, to the eye, keeping more eye cells alive. This is used in the treatment of retinitis pigmentosa, among other diseases. The company has recently completed highly successful Phase II clinical trials.

LenSX Lasers. Created by the founders of IntraLase, this company’s technology uses advanced femtosecond laser surgery to improve cataract surgical procedures, making them more precise and safer. It has attracted enormous interest in the market.

WaveTec Vision. WaveTec uses a unique system mounted on a surgical microscope that enables cataract surgeons to perform better surgery by giving them real-time information about the eye during surgery. Once the natural lens is removed from the eye during cataract surgery, for example, the system measures the power of the eye to make sure that the intraocular lens selected for implant is precisely the proper power.

In venture capital, the incubation of promising seed-stage startups is an established practice. This concept has been applied to ophthalmic start-ups, motivated by the success of the Innovation Factory in Atlanta. This is a diversified healthcare start-up incubator that created start-ups in which Versant and other venture firms have invested successfully. It sparked the desire to create ForSight Labs, a Silicon Valley ophthalmic incubator cofounded by Eugene de Juan, a world-renowned ophthalmologist and an ophthalmology professor at the University of California at San Francisco. ForSight, created in 2005, has launched four ophthalmic companies, all now funded by Versant, Morgenthaler Ventures, and Split Rock Ventures.

As impressive as the technology inroads blazed by ophthalmic start-ups have been thus far in the twenty-first century, even more exciting developments lie ahead in the current decade. Technology often accelerates its growth by building upon the success of predecessor technology, as the LenSX story illustrates. The majority of baby boomers will be retired by 2020, and there is every reason to believe that many of them will want the best ophthalmology care possible. The technological progress in the ophthalmology field will continue to grow at an impressive pace and fulfill that market ­demand.