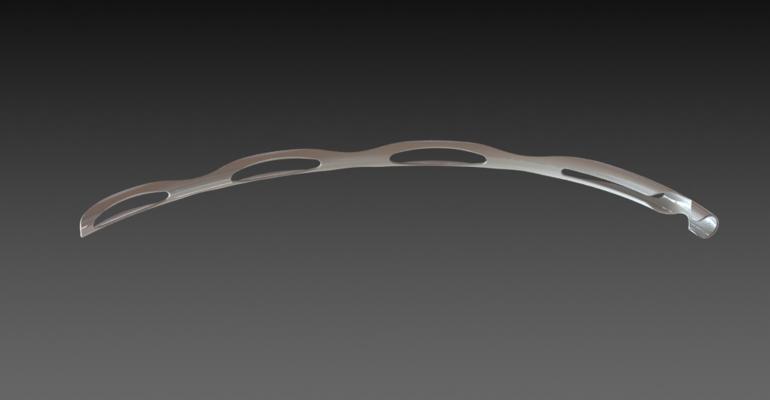 The competition in the microinvasive glaucoma surgical (MIGS) space is certainly heating up after today’s news. FDA has given a nod to Ivantis’ Hydrus Microstent, which will undoubtedly compete against Glaukos’ iStent.

Irvine,CA-based Ivantis’ approval comes on the heels of Glaukos winning a nod from FDA for the iStent inject Trabecular Micro-Bypass System.

Data from the study showed that about 77.2% of patients in the Hydrus Microstent group achieved a statistically significant decrease at 24-months postoperative compared to 57.8% in the cataract surgery alone group.

Several epidemiological studies have shown that each point of IOP reduction reduces the risk of progression of glaucoma. Ivantis said the 43% improvement for the treatment group over control is also the largest of any MIGS pivotal trial to date. Ivantis said the HORIZON Trial results have been accepted for publication in Ophthalmology.

“The Hydrus is a novel, next generation, canal-based MIGS device,” Dave Van Meter, chairman, president and CEO of Ivantis, told MD+DI . “While there are devices addressing multiple different flow paths within the MIGS category, Schlemm’s canal-based devices have an inherent safety advantage preferred by cataract surgeons, and, as such, command a majority of the market. The Hydrus, as a next generation canal-based device, offers a unique Trimodal mechanism of action. It has a bypass inlet through the trabecular meshwork, while also dilating and scaffolding a 90-degree span of the canal. Amongst our clinical investigators, we have consistently heard feedback that it is the MIGS device that offers the greatest confidence to the surgeon in terms of proper final placement, and our clinical results speak for themselves.

Keeping an Eye on the MIGS Market

As it stands now, San Clemente, CA-based Glaukos has the lion’s share of the MIGS market. But that’s not to say the company is without challengers – and pretty big challengers at that.

Allergan kicked off consolidation in the MIGS space when it picked up Aquesys and the Xen stent for about $300 million in cash. In 2016, Novartis acquired Transcend Medical – developer of the CyPass stent. Santen Pharmaceutical doled out about $225 million for Miami-based Innfocus.

Glaukos, Ivantis, and Belgium, Based Istar Medical are the only MIGS firms that haven’t been acquired by a larger company.

“The market is growing rapidly, and … has many players already,” Van Meter said. “ It’s important to keep in mind that several other MIGS technologies bypass the natural outflow canal. We, and our key surgeon advisors, feel canal-based devices will continue to drive the majority of the market, and, as such, we believe we are very well-positioned offering a new device in the “sweet spot” of the MIGS market. We have recently hired and trained our new U.S. Sales Team, comprised exclusively of ophthalmic device sales veterans, and we are confident this team will do very well introducing the product to the market.

Van Meter added, “though there are many MIGS players … we feel adding one more player only benefits the surgeons and the patients they serve. Notably, the MIGS market is still in the nascent stages, and is still a vastly underpenetrated market, with much room to grow. And surgeons always welcome a device with best in class efficacy. So, yes, there is absolutely room for one more player.”

Glaucoma Device Makers See a Bright Future Ahead
May 10, 2018