How Medtronic Made the World's Smallest Pacemaker 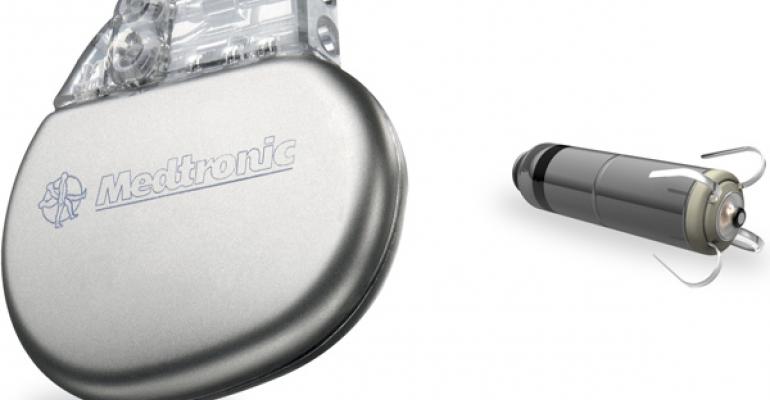 The Medtronic Micra (on the right) is affixed to the inside of the heart with tines that protrude from the device.

Medtronic engineers knew seven years ago that they wanted to build a pacemaker an order of magnitude smaller than what was out there. But how to do it was a different story.

"When we first started, we didn't even know how to do half of the stuff. We just put the goal out there," says Mark Phelps, senior program director, diagnostics and monitoring at Medtronic. "Of course, everyone says you're crazy until you figure it all out, and then they say you're late," he jokes.

What ensued was an engineering adventure unusual for large medical device companies, which often acquire revolutionary innovations through other, younger companies rather than assume the risk of developing them in-house.

Medtronic, though, stepped up to the challenge of systematically developing something game-changing itself. The result is the Medtronic Micra. Recently implanted in the first human patient, it is billed as the world's smallest pacemaker. It does away with the wires, called leads by the engineers, that have plagued pacemaker designs over the decades.

Measuring just 24 millimeter in length with a volume of less than a cubic centimeter, the Micra is one tenth the size of current-gen pacemakers. The leadless device can be inserted directly into the heart using a steerable catheter.

The device bears some resemblance to the St. Jude Nanostim leadless pacemaker, which also can be implanted into the heart using a minimally invasive procedure. The Micra, however, is roughly a third smaller than the Nanostim.

Medtronic began working on the Micra starting first with the goal to make a pacemaker that was an order of magnitude smaller than current pacemakers. On top of that, the tiny device would need to have the same feature set as current-gen devices.

At the same time the Micra was planned, Medtronic also began work on a tiny implantable cardiac monitor that also is one-tenth the size of current-gen products. The monitor can be implanted via a syringe-like device that positions it into a miniscule incision.

The Micra is affixed to the heart using four tines that push into the porous heart tissue, which they latch onto. "You don't even have to attach all four. We included four as a redundancy to make sure you get a good attachment. If you are not happy with the positioning, you can actually go back, pull the tines out, put it in a different location and release it," Phelps says.

The positioning mechanism itself represents a significant innovation, he adds. "The team said we want to make this pacemaker one tenth the size and want to put in the heart. How are we going to attach this thing? To make it even harder, they said: 'Oh, and by the way, we want to make it so if you don't like the position, you can detach it and put it back in a different spot. You can imagine the engineering challenges to try to think through all of those use cases."

About seven years ago, with a clear target in mind, the Medtronic engineering team used a systems-based approach to create the device. "You can't make a new device one tenth of the size of the current product by putting smaller components together. You have to build it as a system because everything is connected to everything else," Phelps explains. "Even the normal packages for each component now need to be separated out so that you can use one surface for another another [application]."

The engineers came up with the term "deep miniaturization" for the technology initiative. "You think about when a person goes technically deep. They have just a thorough knowledge of a domain space. We thought if we work together as a team on miniaturization, we'll have a deeper understanding of how to miniaturize devices," Phelps says.

Instead of developing each component technology on its own path, the team worked to pull together the electronics, battery technology, packaging, electrodes, and case, and build them together as a miniaturized system. The product size goal put pressure on the engineers to ensure that each component had the appropriate size. If one component ended up using up too much space, it would cut into the space for the other components.

The electronics were really the main driver behind the Micra's tiny size. "We had to get ultralow-power electronics. That had to go all of the way back to semiconductor processes and tuning those," Phelps says. The devices run much slower than typical computers and smartphones, and thus save power. "We benefit from the slow signals that the human body puts out. But we do have to fine-tune the power. We measure every nanoamp in the system to make sure we don't waste any power at all."

Unlike engineers developing rechargeable products that can be plugged in, the engineers had to ensure that the device could work for a decade. "That focus on that was really a breakthrough. We worked with our partners in the semiconductors. But then we had to shave the integrated circuits very thin and stack them," he says. "We have extremely dense packaging in the electronic modules. That was one of the key enablers. The battery had to change also. In the old days, we would take a battery and put it inside the titanium can and now the battery is the titanium can. We can't afford that inefficiency. By the way, now that the battery is the outside of the can, it also had to be the electrode."

"Normally each systems engineer would work at their desk on their own component and then you put them together. These really had to be designed as a total system because everything was touching everything else," Phelps explains. "For example, on the implantable cardiac monitor, the electrodes on the other side of the can is on a header, which has the wireless antenna. You had your RF engineer working with your mechanical engineer working with your electrical engineer working on a combined electrode, antenna, and seal to the can. We really had to work as a team to pull it all off. Everybody who touched this project got to do something interesting."

"For the new implantable cardiac monitor, the battery life is three years, which is the same as the current product. For the leadless pacemaker, it is ten years. So even though they shrunk to one tenth the size, they retain the same longevity, which is amazing. We didn't have to defeature the products to make them one tenth the size," Phelps says. "On the cardiac monitor, we not only kept the same longevity and features, we added 20% more memory space and wireless transmission capability. So we actually added features while shrinking it." The aforementioned wireless functionality enables data to be automatically transmitted at night to a bedside monitor, which can then be relayed to clinicians using Medtronic's CareLink network.

Typically, in medical device engineering, a new product represents an incremental improvement over an older product. This is especially true in the implantable space, where new product development can be extremely expensive.

Large device firms are still interested in game-changing technologies, of course, but generally look to acquire them from startups that have demonstrated a technology's potential.

In the case of the Micra, however, the Medtronic management decided to forgo the incremental approach to pursue internal product development and develop a groundbreaking product in house. "For the leadership to agree to throw everything away and start from scratch took a big leap of faith," Phelps says.

That decision, however, was energizing for the engineering team involved. "Instead of just adding one feature to the product, every engineer in every function had to get together and work on a new system that was going to be a breakthrough," Phelps said. "I think a lot of people have considered themselves to be fortunate, and we are very proud of the overall initiative."

The product development cycle for this product was short for an implantable device, Phelps says. "Normally it would be five to seven years for incremental product development within this space. These guys started from just drawings on a piece of paper to actual products in that time frame where everything was built from scratch in seven years."

Cutting Costs as Well as Size

Heart disease, which remains the world's number one killer, is often highly expensive to treat. While innovative devices such as stents, pacemakers, and ICDs have saved countless lives, they often come at a significant cost. The past several years have seen growing pressures to curb the cost of devices used for cardiology and, in some cases, to curb their use altogether. Such is the case for stents used for elective procedures.

The Micra--on top of the implantable cardiac monitor developed over the same time frame--were designed to cut costs at several levels. For one thing, the technology was designed to be much easier for clinicians to deploy. And the devices' small size can potentially lead to faster healing for patients. "The leadless pacemaker goes in almost as a stent through the right ventricle into the atrium and gets attached. That's it. That's the whole procedure," Phelps says. "That would ordinarily be a pretty extensive operation: Make a pocket, put in the lead, sew up the pocket, and so on," he explains.

"For the implantable cardiac monitor, it's the same thing," Phelps says. "You would make the inch and a half incision; you'd implant the device. You would set the device into the tissue. You'd stitch the wound, and you would have a fairly large scar where that device would be because the device used to be about the size as a pack of gum. Now you make a small incision with a tool that is 8 millimeters, you slide in the insertion tool, which is almost like a hypodermic needle. They are just putting a little Steri-strip on top. What used to be an operating room procedure is now like getting a mole removed."

"There is a different research management cost benefit to simplifying the procedure and even the venue. If you can go from an operating room to a procedure room, that's a pretty big difference in terms of cost," Phelps says.

The ease of implantation also bodes well for the product's acceptance globally. A country like India, for instance, has fewer operating rooms for its population than Europe, Canada, or the United States. "For a country that doesn't have as many resources, simplifying the procedure and the venue gives those patients access to technology they didn't have before."

"And the patients love it too because they can pull their shirt down after they've had this procedure done, and you can't even tell they have a leadless pacemaker. Before, you could see the scar and the bulge from the device. It's the same thing as the implantable cardiac monitor. For the vast majority of implants that we've seen, the scar is there but miniscule and very light."