How Do Micra Results Compare to Nanostim Data? 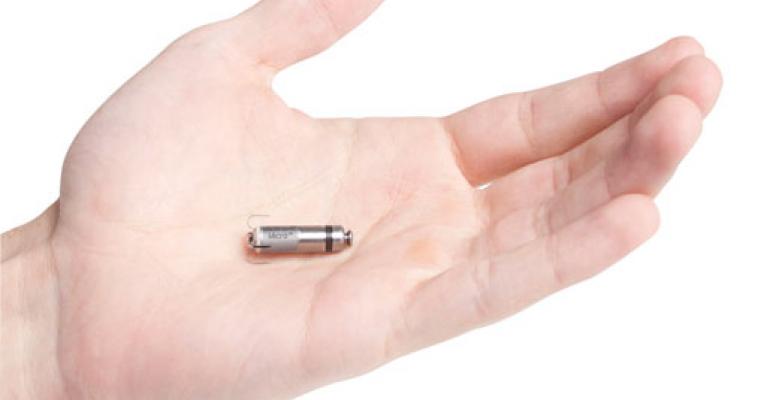 Medtronic announced Monday that its Micra Transcatheter Pacing System (TPS) met safety and effectiveness endpoints in its Global Clinical Trial by "wide margins." Almost all patients—99.2%—were successfully implanted with Micra. Fewer patients experienced adverse events, with 96% free of major complications, despite the fact that the Micra patients were older and had more co-morbidities than the historical comparator control group of patients with traditional pacemakers. There were no dislodgments or system infections in Micra patients and just 0.4% system revisions, which include extraction, repositioning, or replacement of the device.

The Micra single-chamber pacer is less than one-tenth of the size of a traditional pacemaker, about the size of a large vitamin. Medtronic's Micra, delivered using a catheter snaked through the patient's femoral vein, is attached to the wall of the right ventricle of the heart using small tines. Pacing is delivered using an electrode at one end of the pacemaker. Micra is described as repositionable and retrievable, fully compatible with MRI scans, and may have an average battery life of more than 12 years, according to the latest data.

This data, presented Monday at the 2015 American Heart Association Scientific Sessions, invites some comparisons to Nanostim's positive data, released back in August. Although true comparison isn't possible without a head-to-head trial of the two devices, Mark Link, MD, points out in an editorial accompanying the Micra data in the New England Journal of Medicine that the size and design of the two device studies are similar. The Micra trial enrolled 744 patients at 56 centers in 19 countries while the Nanostim LEADLESS II trial enrolled 526 patients at 56 centers across the United States, Canada, and Australia.

As Link writes, both devices performed well and show leadless pacing therapy is effective and safe in the short term:

Beyond these short term results, though, Link writes that these devices still need to prove long-term performance, with challenges such as dislodgement over longer time periods, battery life, infections, and the potential need to extract an infected device. While Link doesn't expect today's leadless pacemakers to replace traditional pacemakers because of limited indications, he writes that "the results of these studies suggest the potential value of the next generation of leadless devices, which will include atrial-based systems and left-ventricular resynchronization systems that are more widely applicable."

In a Medtronic press release, Dwight Reynolds, MD, trial principal investigator and regent's professor and chief of the Cardiovascular Section at the University of Oklahoma Health Sciences Centers, said "We are extremely pleased with the remarkably successful implant rates and safety profile of the Micra pacemaker, including the absence of device dislodgments. We are especially confident in these results because the trial included patients with serious comorbidities from 19 countries on five continents around the world."

According to the data set, Micra patients had 54% fewer hospitalizations (p=0.011) and 87% fewer system revisions (p<0.001) than the historical comparator group of traditional pacemaker patients.

"This is an exciting time for patients who need pacing therapy, as the Micra technology delivered substantial value in the trial through a less invasive procedure with fewer complications, compared to conventional devices," said Brian Urke, vice president and general manager of the Cardiac Rhythm and Heart Failure's Brady business at Medtronic, in a press release. "We anticipate this excellent clinical performance will help reduce healthcare costs and provide economic benefit as well."