How a Brain-Computer Interface Could Help Paralyzed Veterans at Home 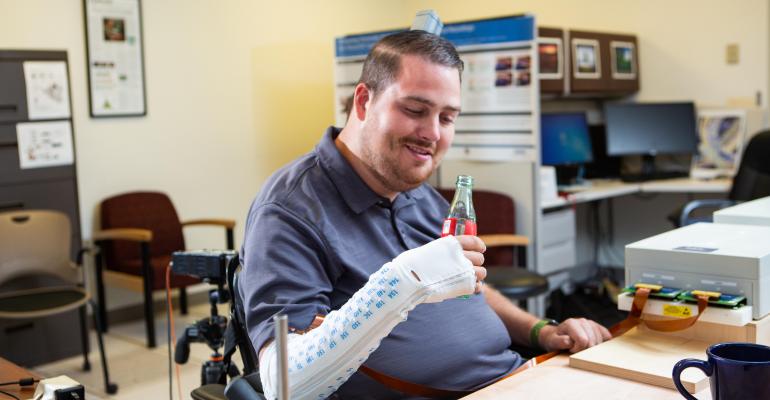 Ian Burkhart, the first participant in a five-year study of Battelle's NeuroLife neural bypass technology, a project Battelle has worked on in conjunction with doctors at The Ohio State University Wexner Medical Center.
Over the course of a five-year study, a paralyzed man was able to regain conscious control of his hand, wrist, and fingers by using a brain-computer interface technology from Battelle called NeuroLife. MD+DI spoke with NeuroLife researchers to find out what they learned during the study and what is next for this game-changing technology.

Ten years ago, an athletic college student from Dublin, Ohio was on vacation with his friends when he dove into a wave, hit the top of his head on a sandbar, and was instantly paralyzed. That young man was Ian Burkhart, the first participant in a five-year study of Battelle's NeuroLife neural bypass technology, a project Battelle has worked on in conjunction with doctors at The Ohio State University Wexner Medical Center. Burkhart completed NeuroLife sessions two to three times a week for five years.

The proof of concept of direct neural interface technology has only emerged in the last 20 years to show that a human can have sensors placed in or on their brain that are designed to pick up signals, such as the person's intent to move, which can be sent to any number of devices, explained Justin Sanchez, a life sciences research technical fellow at Battelle.

"In the case of the work that we've been doing here at Battelle, it's been to try to reanimate a paralyzed limb," Sanchez told MD+DI. "So you can imagine if a person is living with a spinal cord injury and they lose the ability to move their limbs, I mean this is devastating. So things like neural technology can be a groundbreaking, transformative technology that can help them to reanimate their limb."

In other words, Battelle has shown in its study with Burkhart, that it is possible for a paralyzed patient to move their hands and fingers just by thinking about it.

Check out the video above to hear Burkhart talk about his experience with NeuroLife.

The researchers said the ultimate goal is to make NeuroLife an in-home product and restore freedom for injured and paralyzed veterans who have lost the use of their hand during combat.

To participate in the study, Burkhart agreed to have a chip implanted into his brain that could then be connected by a cable to a port that is screwed to the outside of his skull. The port has a cap on it most of the time and when the researchers needed to access it for a session they simply unscrewed the cap and attached the cable. That cable transmits signals between the chip and a computer that has the software and algorithms to interpret those brain signals and then transmit them to an electrode sleeve. The electrodes on that sleeve are activated in different sequences to evoke motions in the hand, explained Herb Bresler, a senior research leader at Battelle.

Over the course of the five-year study, which concluded in May, Burkhart participated in nearly 500 lab sessions, progressing from simply opening and closing his hand to playing Guitar Hero, picking up a bottle and swiping a credit card.

"There's a huge amount of engineering and neuroscience and the combination of both of them together to make something like this happen," Sanchez said.

Key Learnings from the Study

"The system was also used to compare his ability's to conduct motions with and without the system and to evaluate what kind of additional capability the individual achieved when using the system," Bresler said. "It turns out that the functions that were returned using this system amounted to a lower fracture in the spinal column."

"There's a big difference between those because people who have a C7 or T1 type fracture are much more independent. They can use their hands for activities of daily living," Bresler said. "And it was a momentous thing when we realized that we had given back function that would lead to someone's [improved] independence. We also realized that if we were really going to help people we needed to make the system available outside the laboratory."

The researchers have spent a lot of effort figuring out how to improve the software to make it much more user-friendly so that eventually the technology can be used outside of the lab environment without an expert present.

"When you build devices that can directly interface with the human body or the human brain, you realize the plasticity of the brain when you give it some kind of therapy or rehabilitation," Sanchez said. "This was a crystal clear example that you can get these kinds of profound effects when using the right kind of technology that helps people become functional again. Our brains and our bodies were meant for action ... this provides a new way of producing the action."