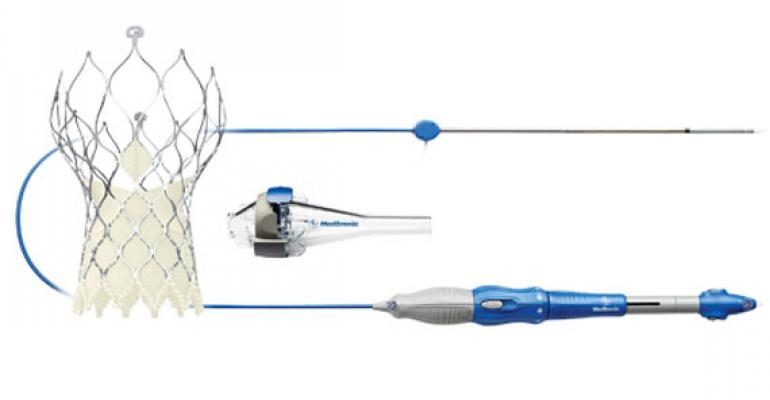 Medtronic and Edwards Lifesciences continue the transcatheter aortic valve replacement (TAVR) race in the United States, with both companies receiving FDA approval for next-generation valves in the last week. On June 23, FDA granted regulatory clearance of Medtronic’s CoreValve Evolut R System for use in high-risk or inoperable aortic stenosis patients. The valve is described as the “first-and-only recapturable and repositionable device” in the United States.

More than being a win for just Medtronic and a sign of faster FDA approvals, this may also be a positive sign for all TAVR players and the therapy as a whole. This approval, along with FDA clearance of Edwards’s Sapien 3 TAVR a few days ago, and the Medtronic CoreValve U.S. approval for valve-in-valve use in March may signify that TAVR is becoming more accepted and commonplace to both regulators and physicians.

Mathew Williams, MD, co-primary investigator, chief of Adult Cardiac Surgery, and director of Interventional Cardiology and Structural Heart at the New York University Langone Medical Center, said in a company press release, “In a short time, the TAVR procedure has become an established treatment option for high risk patients with severe aortic stenosis who are unable to undergo surgery, and physicians are looking to technology advancements to help deliver even better patient outcomes."

Much like the Edwards Sapien 3 valve, Evolut R was approved earlier than anticipated. Glenn Novarro, analyst at RBC Capital Markets, wrote in a June 23 note, “Today’s earlier than expected approval suggests the FDA is growing more comfortable with transcatheter valves, which suggests that the regulatory pathway for future devices may become more accelerated going forward. It would appear that TAVR is becoming more of a ‘standard-of-care’ in treating aortic stenosis, which suggests that discussions for expanding the use of TAVR into lower-and-intermediate-risk patients will soon take center stage.”

The Evolut R TAVR—in valve sizes 23, 26, and 29 mm—and its EnVeo R Delivery Catheter System with a sheath profile of 14 Fr were cleared. The valve’s ability to be repositioned and recaptured could be an attractive feature for physicians. “Clinical data have shown the best patient outcomes are achieved when the valve is properly positioned. The advancement of recapturability with Evolut R gives physicians more confidence during the procedure and provides advantages that are non-existent in other TAVR systems,” Williams said in the release.

Wells Fargo analyst Larry Biegelsen wrote in a July 23 note that he expects the Evolut R U.S. approval to help Medtronic compete against Edwards in the domestic market. “The launch of CoreValve Evolut R abroad has helped MDT take share in the international market, and we expect Evolut R will keep MDT competitive with EW’s Sapien 3 valve in the US. We anticipate both Evolut R and Sapien 3 will serve as potential catalysts in the US TAVR market as they provide better outcomes, feature more advanced delivery systems and can treat more patients with differing anatomies,” Biegelsen wrote.