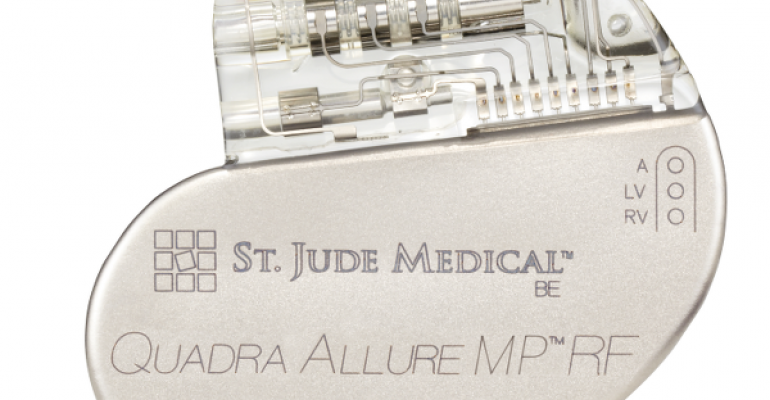 St. Jude Medical gets FDA approval for the first multipoint pacing technology in the U.S. and the devices will likely boost its slipping cardiac rhythm management business.

Cardiac resynchronization therapy, as the name suggests, resynchronizes the lower chambers or ventricles of the heart by sending electrical impulses to stimulate each ventricle to beat in sync for optimal cardiac performance. Each patient's device can be uniquely programmed by physicians. Traditionally for each heart beat, the ventricles receive single pacing pulse. Biventricular pacing accounts for one-third of all patients receiving cardiac resynchronization therapy (CRT).

When St. Jude Medical introduced quadripolar leads in 2011, patients got single pulse pacing at four different points in the ventricles. Now with multipoint pacing technology, four electrodes can be programmed to deliver two pulses from a single lead simultaneously or close together, vastly increasing the pacing options for patients, a St. Jude Medical spokeswoman explained.

"This is the only CRT system in the U.S. that can deliver two pacing pulses from one lead," said Kristi Warner, via email.

Preliminary results presented at the 2013 Heart Rhythm Society meeting showed that  after three months, 89% of patients treated with the St. Jude Medical MPP were classified as responders, compared with the 70% average response rate to traditional CRT therapy.

The newly-approved products, which are already available in Europe, will be shipped some time in the first half of the year, faster than what analysts were expecting.

"Previously, MultiPoint Pacing (MPP) CRT technology was expected to be available in the US in [the second half of 2016]," wrote Rick Wise, an analyst with Stifel, in a research note following the announcement Wednesday. "The company’s early European commercial experience (launched in 1Q15) suggests MPP could be readily adopted in the US potentially driving [cardiac rhythm management] market share recovery."

St. Jude Medical has been hurt by not having a MRI-conditional pacemakers and ICDs in the U.S., so being the only company with multipoint pacing technology ought to help drive sales, Wise noted. In the fourth quarter the Minnesota device maker's CRM sales in the U.S. were down 15%.

"CRM competitors — Boston Scientific and Medtronic — have not broadly discussed whether they will commercially develop MPP [multipoint pacing], currently leaving St. Jude Medical as the only FDA-approved MPP on the market," Wise wrote. "...we highlight this approval as a clear, incremental positive for both the company’s struggling CRM business and STJ more broadly."