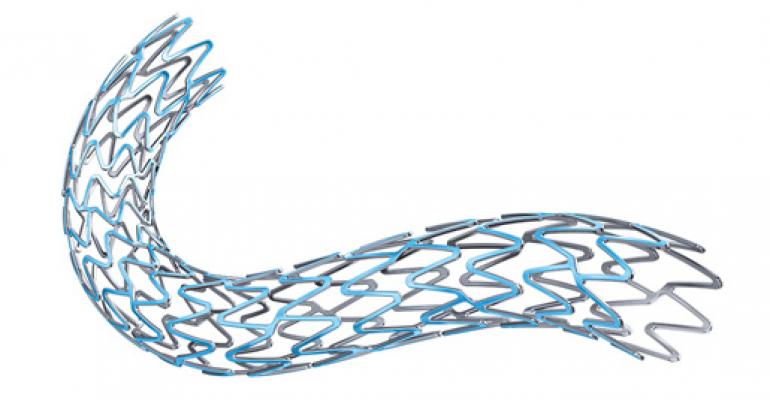 FDA has approved the first bioresorbable stent in the U.S. made by Boston Scientific to treat coronary artery disease.

The Synergy stent is used to open up clogged arteries and elute a drug used to help to keep the arteries from narrowing again similar to drug-eluting stents. Shortly after the polymer has completed eluting the stent at three months, the polymer is absorbed into the body.

“The introduction of the first bioabsorbable polymer stent in the U.S. is a tremendous milestone in the evolution of stent technology,” said Kevin Ballinger, president, Interventional Cardiology, Boston Scientific, in a statement. “The Synergy Stent is a next generation therapy designed to improve patient outcomes and ultimately reduce health care costs associated with the treatment of coronary artery disease.”

While the Synergy stent is the first bioresorbable polymer stent, the first fully absorbable stent is Abbott Vascular's Absorb. That device is fully absorbed into the body between two and three years and doesn't leave anything behind, explained a spokesman. It is awaiting FDA approval but is approved overseas.

In the case of Synergy, the absorption of the polymer reduces and in some cases may even eliminate complications stemming from long-term exposure to the stent long after the drug has been delivered.

An analyst's note published before he was aware of the approval from FDA shows that doctors are eagerly awaiting the product.

"In our survey of U.S. Interventional Cardiologists at the beginning of the year, the majority of respondents (66%) expected Synergy to capture up to 10% of their caseload in the first year, with 20%+ citing the technology can capture up to 25% of their cases," wrote Glenn Novarro, ana analyst with RBC Capital Markets, in a research note early Monday. "In the second year of launch, nearly 70% of our respondents cited expectations to implant Synergy in up to 50% of their cases."

CORRECTION: An earlier version of this story incorrectly implied that Synergy is the first fully resorbable drug-eluting stent in the U.S. That credit will go to Abbott Vascular, which has made the Absorb DES stent once it receives approval from FDA. That product is approved in more than 90 countries.