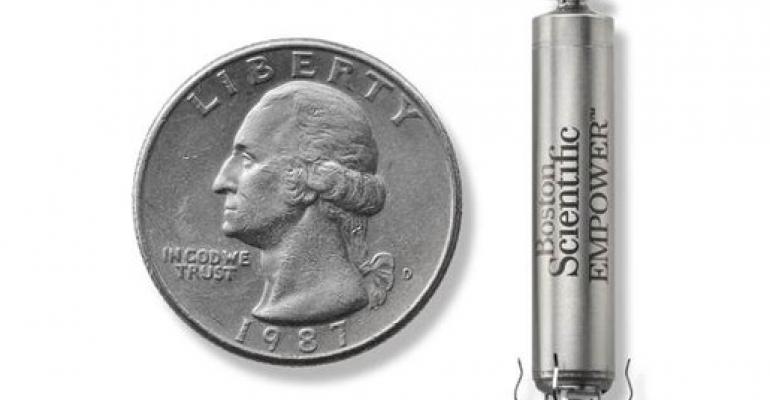 In an interview at the 2016 Heart Rhythm Society Meeting in San Francisco on Wednesday, Ken Stein, senior vice president and chief medical officer of Boston Scientific's cardiac rhythm management division offered up new details of its leadless pacemaker, including a name.

The device, which is not available for sale, is called Empower and has a volume of .78cc, which Stein said is smallest using that measure. In terms of size and circumference, however, Empower falls in between the Micra, the smallest leadless pacemaker and Nanostim, Stein said.

So far pre-clinical studies have been done and by the end of 2016r, a design freeze will be in place, he added.  Soon after clinical trials are expected to commence.

Which of course means that Boston Scientific will lag behind both Medtronic and St. Jude Medical in terms of market entry. In Europe, both the Nanostim and Micra are available, and the FDA very recently approved Micra for the U.S. market while the agency is reviewing Nanostim. In fact, at the HRS meeting, Medtronic held a sponsored event at a nearby hotel where physicians involved in the company's global clinical trials described the simplicity and wondrous nature of the company's leadless pacemaker.

But Stein said that Boston Scientific's Empower has unique qualities that rival devices don't, implying that will negate any effect of being late to the pacer party.

"I think the goal with our leadless pacemaker is much more visionary - it's to be first-to-market with a device that can communicate with our S-ICD so that patients get therapy they want when they need it," Stein declared.

The S-ICD is Boston Scientific's implantable cardioverter defibrillator that is implanted beneath the skin and has no leads in the heart. The technology came to the company when it acquired Cameron Health in 2012.

If a patient has Boston's S-ICD as well as an Empower leadless pacemaker and the S-ICD detects a life-threatening arrhythmia, the device can trigger the Empower pacemaker to action to see if it can resolve the irregular heart rhythm first. That can spare the patient from receiving the jolt that a regular non-interactive ICD will provide when it detects the patient suffering a similar condition.

Further, having this modular system where both the leadless pacemaker and the S-ICD devices communicate with each other and do not have leads in the heart also spares that organ for patients, Stein said.

"The two leadless pacers on the market today are just simple single chamber pacemakers," he said referring to Micra and Nanostim, while applauding both Medtronic and St. Jude Medical in going the route of developing and acquiring leadless pacing technologies.

But how many patients on an ICD will later develop the need for a pacemaker and vice versa as Stein is suggesting?

Stein admitted that per Boston Scientific's own data not a whole lot of S-ICD patients have shown that they need pacing. In fact it's pretty rare that they show that need. But he believes that an ICD patient already implanted with the company's S-ICD will find it appealing to have a second device that has no leads in the heart.

"Even though the actual number of patients to date with the S-ICD who would need a pacemaker is pretty small, we just see it as really opening up the population who could get S-ICD to be much less restrictive and much more inclusive," Stein said.