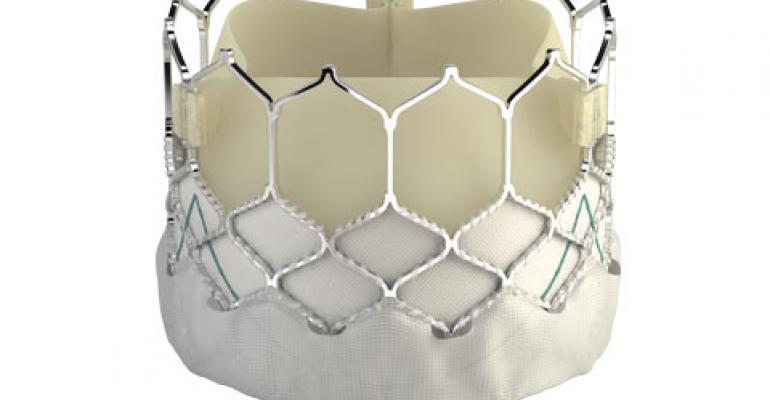 The FDA has approved the next-generation Sapien 3 transcatheter aortic valve (TAVR) from Edwards Lifesciences months ahead of expectations. According to a company press release, the Sapien 3 TAVR with the Commander Delivery Systerm can now be implanted commercially in U.S. high-risk patients with severe, symptomatic aortic stenosis.

Sapien 3, which has been available in Europe since January 2014, comes in 20, 23, 26, and 29 mm sizes. Prior to this week's announcement, management had anticipated commercial sales to start in the fourth quarter of 2015. With this early FDA approval, Edwards plans to increase Sapien 3 supply and complete the U.S. launch by the end of the year, according to the release. Joanne Wuensch, an analyst at BMO Capital Markets, wrote in a research note that her conversations with management indicate that Sapien 3 sales will begin immediately, on June 18.

The Sapien 3 valve, which was studied in the PARTNER II trial, is thought to improve on earlier generations of Edwards valves by reducing paravalvular leak with a fabric skirt around the valve frame. Paravalvular leaks have been a problem associated with valve replacement, especially TAVR procedures. They occur when the valve annulus is not completely sealed, leaving a small space between the valve implant and the cardiac tissue. Patients with paravalvular leak often show symptoms of continued heart failure.

"The SAPIEN 3 valve sets a new standard for transcatheter heart valve performance and patient outcomes," said Martin B. Leon, MD, director of the Center for Interventional Vascular Therapy at NewYork-Presbyterian/Columbia University Medical Center, professor of medicine at the Columbia University College of Physicians and Surgeons, and a co-principal investigator for the PARTNER II trial, in the company press release. "We have seen some of the best results to date from the PARTNER II Trial in treating high-risk patients with the SAPIEN 3 valve. The PARTNER II study concluded that this new valve reduced several complications associated with the TAVR procedure such as paravalvular leakage and stroke, and represented a meaningful improvement over data from prior studies with earlier-generation devices," he said.

Edwards has performed well this year, beating analyst expectations and continuing to drive strong TAVR sales growth. According to a SeekingAlpha.com transcript, company management guided to approximately $10 million in Sapien 3 sales in the first quarter of its launch, but didn't expect a meaningful revenue impact until 2016. Scott Ullem, Edwards chief financial officer, said on the first quarter earnings call, "In other words, if we receive approval in the fourth quarter, we would not expect to see any upward lift from Sapien 3 until 2016."

Analysts viewed the news of Sapien 3's early approval favorably. In a research note following the approval announcement, Glenn Novarro, an analyst with RBC Capital Markets, wrote, ". . . we think early approval could provide material upside to our/consensus estimates for 2H15, depending on the timing of full launch . . . We believe this positions management to potentially raise guidance in late July 2015, when EW reports its 2Q15 result . . . we believe EW's guide for TAVR growth (~25%), revenue (~$2.5B), and EPS (~$4.20 at the midpoint) is conservative."

Sapien 3 saw fast adoption in Europe and analysts expect similar adoption in the United States. "U.S. physicians have been eagerly awaiting the launch of the Edwards SAPIEN 3 valve since it became available in Europe last year, and we appreciate the FDA's timely and thoughtful review in making this device available to American patients," Larry L. Wood, Edwards' corporate vice president, transcatheter heart valves, said in the press release.

The earlier-than-anticipated FDA approval of Sapien 3 for high-risk patients may mean an accelerated approval for the less-sick patient population, too. Novarro wrote that "We believe Partner 2a data could be positive and potentially expand TAVR into intermediate-risk patients as early as late 2016/early 2017 in the US." Wuensch's note also pointed to a positive outlook: "In addition, with the Sapien 3 approval coming much earlier than expected, the pace of THV (transcatheter heart valve) product approvals by the FDA is increasing, we wonder whether or not an intermediate-risk approval could also come earlier than expected (2H16E)," she wrote.

Of course, faster FDA approvals could be good news for TAVR competitor Medtronic, too. Rick Wise, an analyst with Stifel, wrote in a research note, "Clearly, FDA is making a concerted effort to accelerate TAVR program timelines and we suspect MDT's Evolut R could also see a more rapid approval than management's current 1HFY16 (or May 2015 - Nov 2015) guidance."