Can Stryker Get More Surgeons to Use MAKO Robotic Platform? 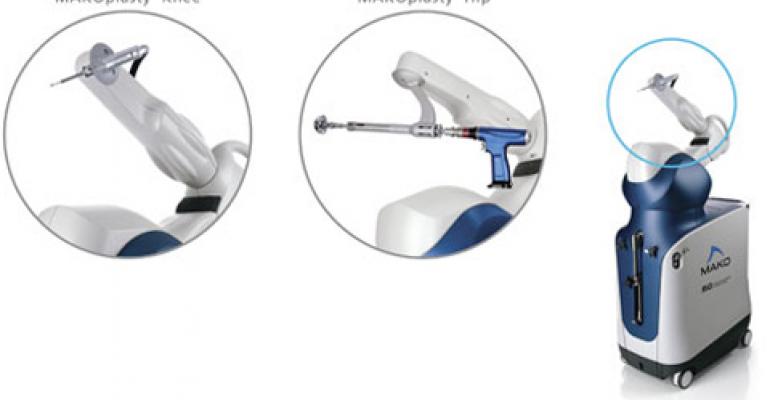 Orthopedics company Stryker has had a tough time integrating the MAKO business especially on the sales side, but the tide could be turning with a sales ramp.

Orthopedics company Stryker has had a tough time integrating the MAKO business especially on the sales side, but the tide could be turning with a sales ramp.

Orthopedics company Stryker shelled out $1.65 billion in acquiring MAKO betting on a future where hip and knee surgeries would be robotically assisted.

It was a bold move, but by executives' own admission the sales integration has been tougher that expected. It's no surprise then that MAKO did not contribute much to overall revenue last year. A new analyst report on a survey of 50 orthopedics surgeons found that only eight of them currently use MAKO products in hip and knee surgeries. But that may soon be changing.

In a research report Glenn Novarro, an analyst with RBC Capital Markets said that the three-most commonly cited reasons by surgeons for not using MAKO were lack of clinical benefits, the high price tag and a need for more clinical data.

Given this sentiment, can Stryker get more surgeons to use MAKO? The answer, at least from this report, seems to be an overwhelming yes. Aside from the eight in the survey who said they currently use MAKO in hip and knee procedures, another 12 said they expect to be using the robotic system over the next 12 months.

"By the end of 2015, [about] 40% of surgeons we surveyed expect to be using the MAKO platform for total hip, partial knee, or total knee procedures," Novarro wrote in his research note on Thursday.

The three oft-cited reasons for why surgeons said they were likely to use the product were ease of use, ability to assist in technically challenging procedures and the capacity to reproduce results.

In fact, based on the survey response, Novarro wrote that in the next 12 months, Stryker would take more market share in hip and knees than any other orthopedics company.

Overall, robotic-assisted surgery in hips and knees will grow significantly over the next decade. Novarro suggests that:

So despite a slow, disappointing start, aMAKO ramp is coming and a consequent uptick in revenue.