Boston Scientific's Subcutaneous-ICD Gets a Boost 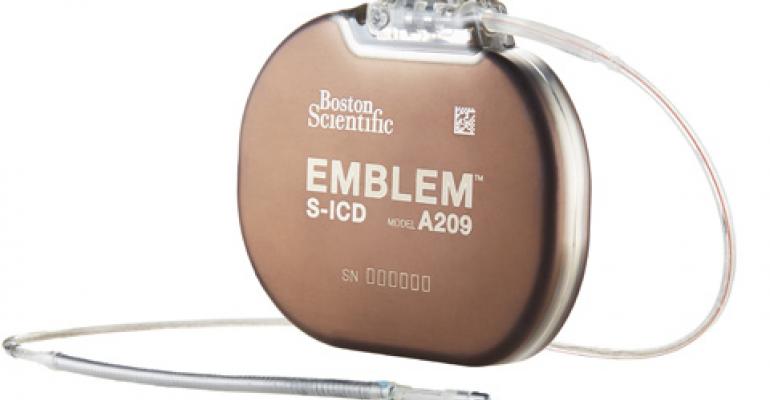 The European Society of Cardiology updates its guidelines for treating patients needing ICDs and the new recommendations may boost use of Boston Scientific's Emblem S-ICD.

Boston Scientific's Emblem S-ICD, the next generation subcutaneous ICD product, is a novel technology that removes what many believe is the weakest link in implantable cardioverter defibrillators - the leads in the heart.

The device that came to Boston Scientific through the Cameron Health acquisition in 2012 is inserted just under the skin near the chest. And on Monday the Marlborough, Massachusetts device maker announced that European Society of Cardiology is updating its guidelines that would allow physicians to use it in a certain group of patients. The hope is that the recommendation may boost Emblem-ICD's adoption in Europe.

The guidelines noted that subcutaneous defibrillators "should be considered as an alternative" to traditional ICDs in patients who won't require pacing capability. The Society also recommended the use of S-ICDs for patients in whom "venous access is difficult, after the removal of a transvenous ICD for infections or in young patients with a long-term need for ICD therapy."

The news of the new guidelines is welcome indeed.

As the manufacturer of the world’s first and only subcutaneous defibrillator, we are extremely pleased that the updated ESC guidelines have now been published,” said Dr Kenneth Stein, Chief Medical Officer, Rhythm Management, Boston Scientific. “The guidelines recognize the strong clinical science supporting the compelling benefits of a device that can protect a broad range of patients from sudden cardiac death while leaving the heart and vascular system untouched. This represents another important milestone after the launch of EMBLEM™ S-ICD System, the second generation S-ICD, earlier this year.”

But it will be interesting to see whether guidelines will change physician practice on the ground.

A cardiologist who found the technology promising and was involved early on when Cameron Health was testing the subcutaneous ICD in clinical trials has been underwhelmed.

"I think over the last two years three years having it available in our practice, having no real limitations in terms of cost or reimbursement issues that limit our ability to use the device ... I found that my personal use of the device has been low,"said Jay Mazel, a cardiac electrophysiologist at MedStar Health Cardiology Associates. "I am using it in about 5% of my implants."

Mazel explained that the low usage is a factor of "needing a subcutaneous ICD and having a slight preference for a device that might be slightly better for an individual patient."

He noted that the device is "heaven sent" for those patients who are on hemodialysis, who has a history of vascular disease and an occluded or blocked venous anatomy.

But they constitute a small section of the population needing such heart devices.

[For] the primary intervention patient who we are really targeting for these kinds of devices here, we have to make a conscious decision that we are going to put in a subcutaneous ICD and forego the potential that the patient might in the future need pacing therapies. And therein lies the challenge. We need to take a risk every time we implant this device that we've got it right and the patient is not going to need pacing therapies down the road and I am not going to be in a situation where I've got a device that can't deliver the appropriate therapies to a patient or if they might need biventricular pacing in the future. Given that barrier, myself ... and my colleagues kind of implanted a lot less of these things.