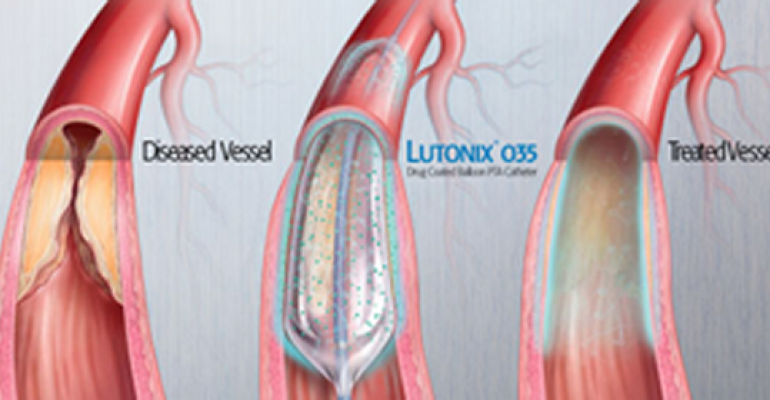 The first drug-coated angioplasty balloon catheter approved in the U.S for peripheral artery disease in the upper leg is demonstrating superior clinical results compared to the standard of care.

C.R. Bard announced Thursday that the New England Journal of Medicine is publishing the results of a study that shows that the Lutonix 035 Drug Coated Balloon PTA Catheter has better primary patency than the standard percutaneous transluminal angioplasty procedure. In other words, the device is better able to keep blocked arteries open than traditional PTA.

The Lutonix DCB is coated externally with the drug paclitaxel that has the potential to help prevent the arteries from being blocked again after the procedure.

During the procedure, the blocked artery is first partially opened with a traditional angioplasty balloon sans the drug. Thereafter, the Lutonix DCB is used to fully open the narrowed portion of the artery. This allows the drug to be applied to the artery wall. Safety of the Lutonix device is consistent with standard PTA balloons that do not elute drugs.

The results are based on the LEVANT 2 pivotal study, which is a global randomized trial conducted in 42 sites in the U.S. and 12 in Europe.

"The publication of these data in the prestigious New England Journal of Medicine reinforces not only the superior results for Lutonix 035 DCB compared to standard PTA, but also the rigor of the clinical trial," said Dr. John A. DeFord, Senior Vice President, Science, Technology & Clinical Affairs, C. R. Bard, in a news release. "This should provide additional confidence to clinicians looking to use a drug coated balloon in treating PAD in the femoropopliteal arteries.”

While Lutonix 035 DCB was the first to win approval from FDA in October 2014, it has some competition in the United States from Medtronic's Admiral DCB, which was approved shortly thereafter. They got a reimbursement boost from Medicare earlier this year.