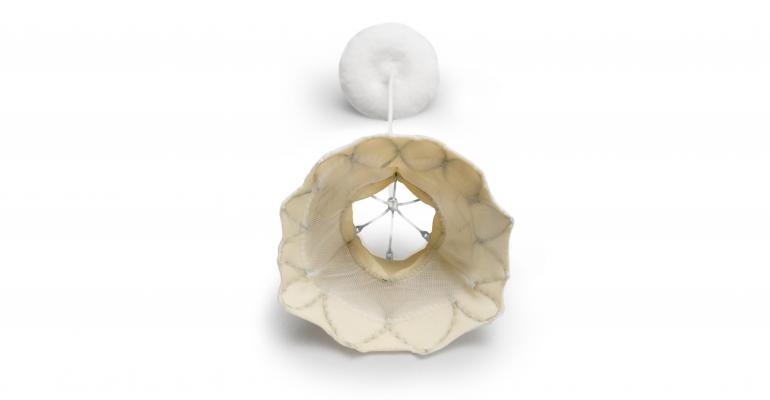 Abbott acquired Tendyne back in 2015, a year where there was significant M&A activity in the transcatheter mitral valve replacement space.

Abbott Laboratories has hit a substantial milestone in its plan to bring the Tendyne transcatheter mitral valve replacement (TMVR) system to the U.S. market. The Abbott Park, IL-based company said it has initiated SUMMIT, a pivotal clinical study of the TMVR system. Up to 1,010 patients will be enrolled in up to 80 sites in the pivotal trial.

Abbott said the investigational Tendyne device is the first and only mitral valve replacement that can be repositioned and fully retrieved, allowing the surgeon to precisely place the device during implantation, which could improve patient outcomes. Tendyne is a tri-leaflet, bioprosthetic valve available in multiple sizes, and is stabilized by a pad and a tether mechanism that holds the pad in place where it's been implanted inside the native valve.

The study will determine if treatment with the Tendyne TMVR system is safe and effective for patients suffering from severe mitral regurgitation. SUMMIT investigators will evaluate a composite endpoint of death, cardiovascular hospitalization, stroke or reoperation at one year. The first several patients in the trial were treated at Ascension's Via Christi Hospital St. Francis in Wichita, KS. and the West Virginia University Heart and Vascular Institute in Morgantown, WV.

In an email, Abbott told MD+DI  enrollment in the SUMMIT study is anticipated to be completed within four years and the primary endpoint will be evaluated at one year, with total patient follow-up being in five years. The firm said regulatory submission is expected one year following the trial conclusion.

The Tendyne system has the potential to build on Abbott’s MitraClip, which was originally approved in 2008. The device been a significant driver for the company, opening up the market for minimally invasive mitral valve repair. Earlier this week, Miles White, Abbott’s chairman and CEO spoke about MitraClip’s impact during the 2Q18.

“In structural heart, strong growth across several areas of our portfolio was led by MitraClip, our market-leading device for the minimally invasive repair of mitral heart valve,” White said, according to a Seeking Alpha transcript. “Earlier this month, we received U.S. FDA approval for our next-generation version of MitraClip, which includes design enhancements and an additional clip size to enable more patients to be treated.”

Is TMVR The Next Big Medtech Opportunity

TMVR is the next frontier for many medtech companies. It has been long believed that TMVR could represent the next big multi-billion opportunity in medtech. Three years ago, a flurry of M&A, investments, and consolidation took place in the TMVR market.

Abbott significantly strengthened its mitral valve portfolio in 2015 when it acquired Tendyne for $250 million. Around the same time Abbott made an unspecified investment in Santa Cruz, CA-based Cephea Valve Technologies, a mitral valve repair company.

Not to be left out of the TMVR action, Medtronic picked up Twelve in a deal worth up to $458 million, shortly after the Tendyne acquisition was announced.

The Valtech acquisition yielded Edwards the Cardioband, a transcatheter ring technology that is set to compete firmly against Abbott’s MitraClip.

LivaNova made a significant acquisition in TMVR when it acquired Maple, MN-based Caisson. London-based LivaNova had been investing in Caisson since 2012 and picked up the remaining 51% of the company for about $72 million.

Despite TMVR being a lucrative market, some companies have not had a smooth ride in the space. In May, Vancouver-based Neovasc said its revenues declined by 77% from $339, 922 for the first quarter of 2018 compared to revenues of $1.5 million from the same period in 2017.

Neovasc has the Tiara TMVR system, which is delivered through the apex of the heart to replace the mitral valve while preserving the integrity of the surrounding structures of the heart.

Just last month, the company announced the first patient in the U.S. has been implanted with a Neovasc Reducer, a CE-Marked medical device for the treatment of refractory angina in a compassionate use case.