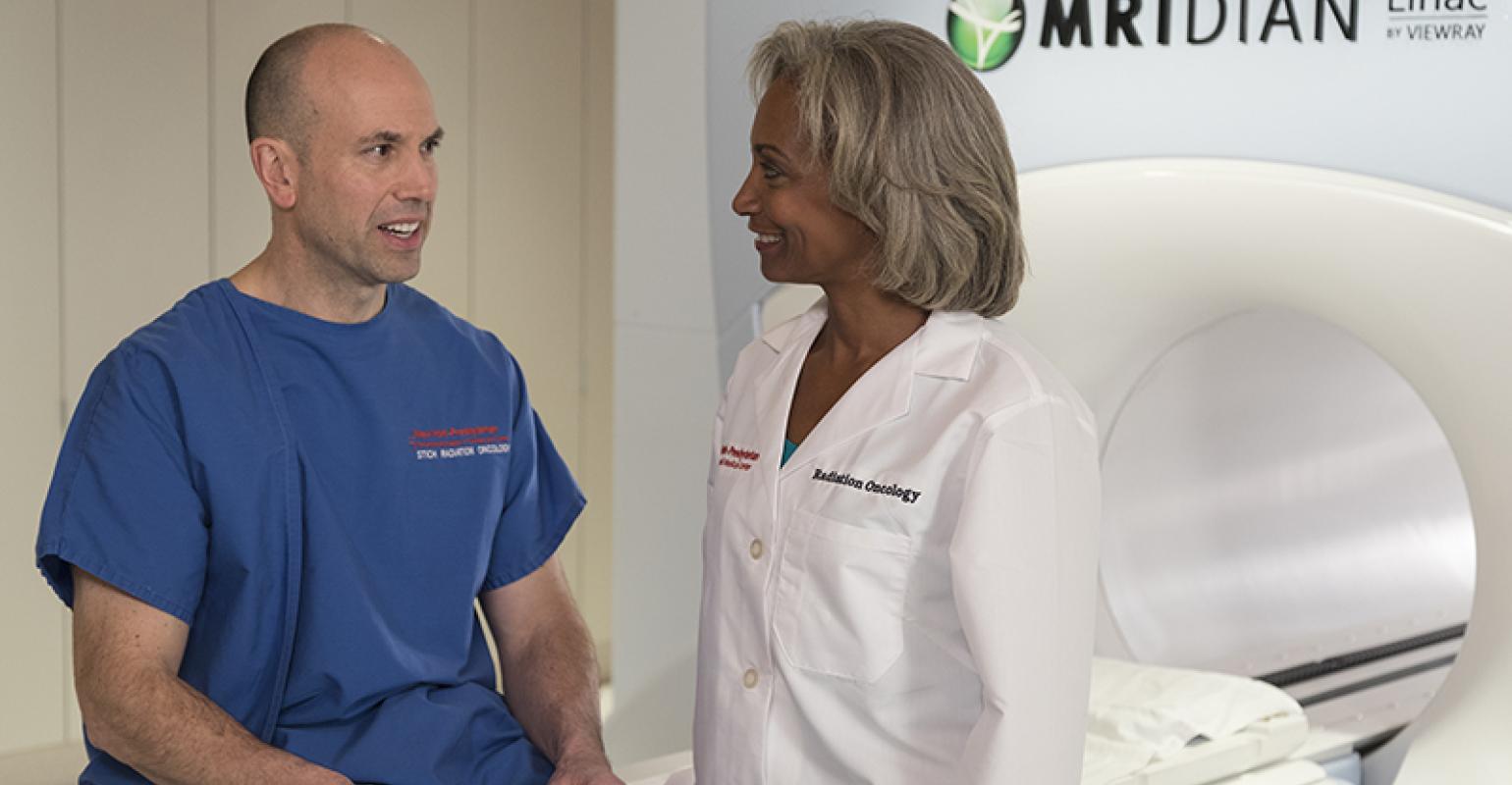 Image courtesy of ViewRay Inc.
In preliminary third-quarter results, ViewRay reported eight new orders for its MRIdian Linac system, including three upgrades. The MRIdian Linac, which can help oncologists see how the body is reacting to radiation treatment in real-time, represents a significant step forward and could give the Cleveland-based company the upper hand over competitors.

ViewRay Gets Knocked Down, but It Gets Up Again

ViewRay had a rough second quarter, but preliminary third-quarter results seem to have renewed investors' faith in the Cleveland-based company.

Not to compare ViewRay to a Chumbawamba song, but the company got knocked down hard in August after reporting its second-quarter earnings (more on that in a bit). But just like the aforementioned British alternative rock band, the medical device company seems to have gotten up again.

ViewRay leverages MRI technology to offer oncologists real-time image guidance during radiation delivery. The MRIdian Linac, which can help oncologists see how the body is reacting to radiation treatment in real-time, represents a significant step forward and has the potential to give the Cleveland-based company the upper hand over competitors.

ViewRay Got Knocked Down ...

ViewRay reported its second-quarter earnings results on Aug. 9 and while revenue was up, orders were lower than expected, cash on hand was down, CFO Ajay Bansal's resignation was announced, and the company lowered its revenue guidance for the year. ViewRay now expects 2019 revenue to be between $80 million and $95 million with between 12 to 15 installations of its system and three upgrades.

"This guidance reduction is chiefly the result of three systems taking longer than anticipated in the vault planning and permitting process and the lack of certainty around the timing of two distributor orders," CEO Scott Drake said during the company's second-quarter earnings call, as transcribed by SeekingAlpha. "Although we're disappointed in this reduction, we believe it's the right course of action."

Drake explained that the company has built a vault readiness team to reduce variability, lower customer costs, and speed the path from purchase order (PO) to the first patient treated. ViewRay's goal is to reduce this timeframe from roughly 18 months to 12 months, he said.

"Generally speaking, installations fall into one of two scenarios. In the first scenario, planning, construction, and installation generally go as anticipated and no significant issues reside outside of our control," Drake said. "In these instances, our team has met or exceeded our 12-month goal. In fact, in a recent instance, the PO to commissioning took only 261 days."

The second scenario is when circumstances impacting the timeline are largely outside of the company's control, Drake said. "The majority of the delays that we're unable to mitigate are associated with customer planning, permitting, and construction timelines. We're working to get an earlier line of sight on these items and take appropriate action," he said.

The CEO went on to explain that these delays resulted in three installations potentially being pushed from this year to next, which impacts whether the company will be able to recognize the revenue in 2019 or 2020.

"I want to reiterate, we've built a highly effective team that's well-positioned to scale," Drake said. "But we must recognize the degree to which these items are difficult to mitigate."

He also noted that the company removed two other systems during the second quarter due to a distributor potentially not fulfilling their commitments this year. "There's end-customer demand at both the clinical and executive level of these two hospitals," Drake said. "We will ensure that we have the right strategic partner to not only fulfill these two orders, but to address the growing demand in this market. We are working to resolve this issue, but we are not sure we will be able to do so by year-end. We believe all five of these systems will be successful MRIdian centers in due time, but perhaps not in 2019."

In the second quarter, ViewRay took three orders for MRIdian systems. Drake reminded investors during the call that this was the first full quarter that the company's newly built U.S. team was in place, and he said the company continues to enhance its direct and distribution network internationally.

"While this is a relatively light number of orders, we remain confident that we will demonstrate the momentum of our growing pipeline and end-customer demand moving forward," he said.

Unfortunately, investors didn't seem to share Drake's confidence at the time, judging by the fact that the company's stock dropped more than 56% after the call.

On Oct. 15, ViewRay reported better-than-expected preliminary third-quarter results that seem to have restored some investor's faith. Most promising is the noted eight new orders for the MRIdian Linac system that were received during the quarter, including three upgrades. Another positive sign is that ViewRay's backlog grew by about $12 million compared to the previous quarter.

Earlier this week ViewRay's stock went up again after investment firm Oppenheimer initiated coverage of the stock with a rating of "outperform." According to SeekingAlpha, that makes one sell-side analyst rating in the "outperform" category while seven firms rate the stock as a "buy" and one firm is rating it a "hold."