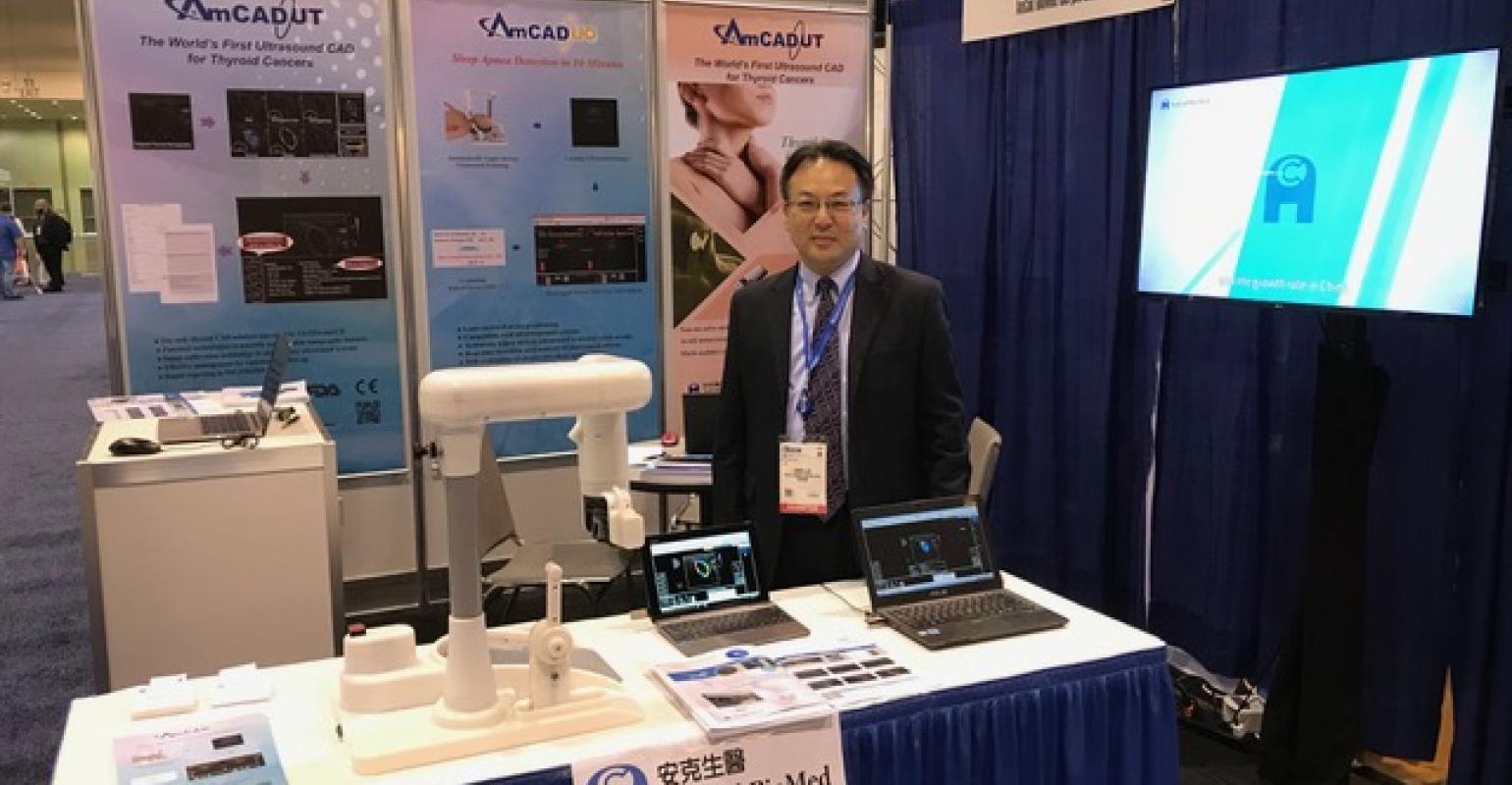 A new development out of Taiwan could improve thyroid cancer screening after doctors unveiled a new diagnostic imaging tool last month. The AmCAD-UT Detection technology developed by AmCad BioMed Corp. is being hailed as the world’s first ultrasound CAD for thyroid cancer detection.

For years, doctors have relied on traditional ultrasound imaging devices that produce black-and-white images to help doctors get a view of the thyroid nodules for abnormalities. With this new AmCAD-UT Detection device, doctors would now be able to view images of the thyroid nodules in better resolution with full color, an advance that could help raise the accuracy of thyroid imaging and cancer detection, while also reducing the need for doctors to administer painful tissue sample tests.

Teddy Lin, project manager from the Taiwan External Trade Development Council, told MD+DI that the AmCAD-UT Detection Device enables computer-aided detection of “malignant nodule (cancer) even it's smaller than 1 cm or in early stage.” The system features an “exclusive contour outlining and automatic adjustment” that allows “physicians to rapidly outline the most adequate nodule contours on the ultrasound image.” The device visualizes and quantifies ultrasound features including anechoic area, echogenicity, echogenic foci, texture, and margin also "taller than wide.” It then provides “a quantitative dashboard with real-time values to show the risk possibility of malignant neoplasm as a reference for the physician to make a diagnosis and recommendation on continuous follow-up or FNA [fine needle aspiration].”

Antonia Novello, former U.S. surgeon general and commissioner of health for the state of New York, attended the unveiling of the new technology at July’s Florida International Medical Expo. Novello was impressed with the device, remarking that the technology will make it much easier for doctors to view the thyroid and detect the signs of malignant cells.

The fine needle biopsy technique is often used to help doctors confirm the presence of malignant cells in the thyroid and involves the injection of a long needle into the thyroid region of the patient’s throat to draw thyroid tissue for lab analysis. It can be a painful procedure and is often necessary when doctors have only black-and-white, low-resolution ultrasound images.

The American Cancer Society has reported that the use of ultrasound technology for thyroid cancer detection is increasing because of the technology’s enhanced ability to detect small thyroid nodules that may get missed by other screening methods. Traditional ultrasound techniques also have a tendency to report false-positives, something that the AmCAD-UT Detection method could also help curb, as the device has shown significantly lower screening recall rates.

“Our report provides more detailed information of thyroid nodule for physicians to make accurate suggestions for patients,” said Lin. “Our target is to assist to avoid 50% unnecessary FNA because of inadequate sampling and indeterminate diagnosis Follicular neoplasm and to avoid 30% of unnecessary thyroidectomy.”

For now, the device is already being used in Taiwan to help doctors screen for thyroid cancer, while researchers look toward clinical trials to continue to improve the technology. The company is also working to authorize the use of the device in China as well as in several European markets like Russia and India.

As for the United States market, the company remains hopeful that the device will eventually receive FDA clearance so they can begin to market the technology. The American Cancer Society estimates that thyroid cancer is among the most rapidly increasing cancers in the United States, with new cases tripling in the past three decades. With new technologies like the AmCAD-UT Detection device, AmCad Biomed Corp believes that early detection finally be the key to turn the tide and help save more patients.