How Magnetic Pulses Are Lifting Moods 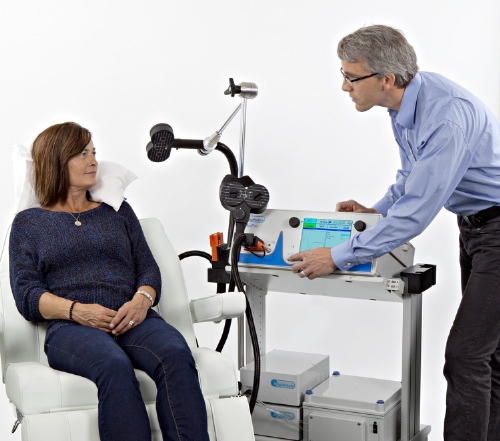 FDA cleared the MagVita TMS system with MagPro R20, developed by MagVenture Inc., for adults with major depressive disorders who have not responded to traditional antidepressant drugs.

Transcranial magnetic stimulation (TMS) has been gaining traction in recent years among clinicians, patients, and even insurance companies as a method of treating depression in adults who have not responded to traditional antidepressant medications. Although FDA first cleared TMS in 2008, newer devices are helping to drive adoption of the technology and make it more widely available for U.S. patients.

The most recent device to enter the U.S. TMS market is the MagVita TMS system with MagPro R20 from Farum, Denmark-based MagVenture. FDA cleared an earlier version of the MagVita TMS system in 2015, and recently cleared a newer iteration of the technology that has been specifically designed for smaller practices in need of an entry-level TMS system. The device is indicated for adults with major depressive disorder who have not responded to traditional drug therapy.

TMS is used to deliver magnetic pulses to specific neurons in the brain and peripheral nervous system. The MagVita device uses rapidly changing magnetic fields to create weak electrical currents that can stimulate the brain to produce a lasting effect on cerebral functions, specifically mood improvement for patients experiencing depression. The system was built to run many different protocols successively, and can deliver up to 20,000 pulses non-stop, according to the company.

Malvern, PA-based Neuronetics was the first to introduce TMS to the U.S. market when FDA cleared its NeuroStar device. The second company to score FDA clearance for a TMS device was Brainsway, a company based in Jerusalem, Israel.

The idea of neurostimulation continues to be an area of medicine with some murky waters. Researchers from the University of Pennsylvania and Harvard University began warning DIYers last summer of the dangers of current stimulation for enhanced brain function, as the process can have unintended consequences. However, the MagVita TMS system was specifically designed as a non-invasive technique that has shown to be very safe and effective as a method of treatment, according to MagVenture.

The initial session consists of a brief assessment to determine the patient's individual stimulation level, followed by five treatment sessions a week over a six week period. The system consists of a TMS device, coils, an isolation transformer, vacuum pump, and a treatment chair and pillow. MagVenture said there are no per use fees, or costly components

The company said the technology was also designed to meet the demands for both clinical practices and research applications,  with a design that is user friendly and specifically tailored to keep operators informed about important performance parameters. The company said it plans to add additional magnetic stimulators in the future.