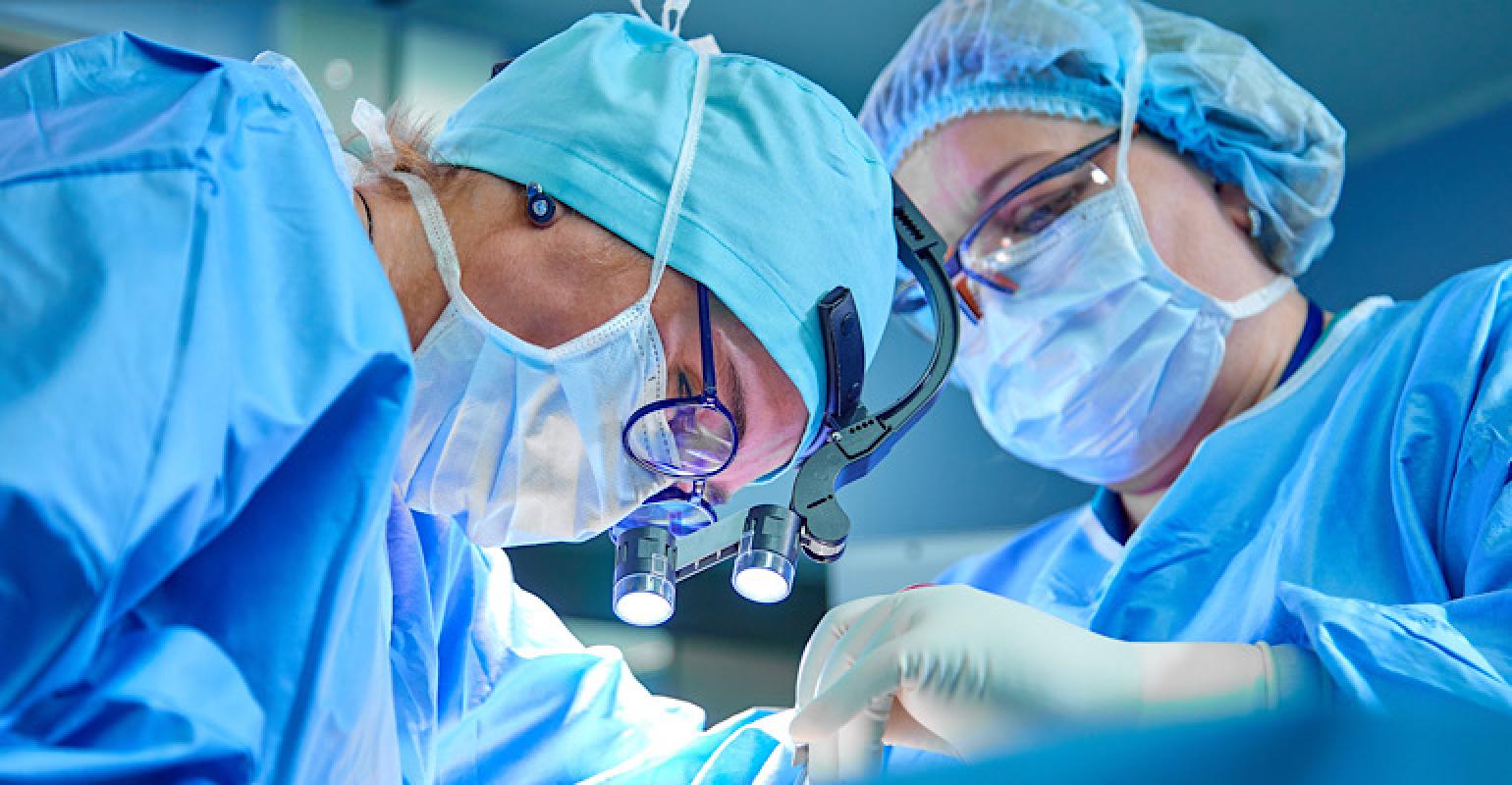 Image by Georgiy - Adobe Stock
Surgery volumes have rebounded faster than expected, but the process of having surgery in a post-pandemic world may never be the same.

Most medical device companies took a big hit on revenue during the height of COVID-19 as elective and non-emergency surgery came to a screeching halt in many geographical markets. During The Virtual MedTech Conference this week, hosted by AdvaMed, panelists weighed in on the recovery pace of procedure volumes, and offered up some predictions for what the future holds for surgery in a post-COVID world.

Moderator Monish Rajpal, managing director at LEK Consulting, laid the groundwork of the discussion by sharing some of his observations of surgery trends. Rajpal said procedure volume recovery began around June and July, which tracks with previous MD+DI reports. He said the recovery was brisk at first, quickly reaching about 80% of pre-COVID volume levels, with some variation by specialty, hospital size, and geography.

"That recovery appears to have gradually slowed down a bit, and we think that is being driven by a few factors," Rajpal said.

One factor he noted is hospital capacity constraints.

"As we all know, to operate in this environment hospitals have had to deploy a number of different protocols," Rajpal said. "They've tried to mitigate the impact of those protocols, but the net impact is a 20% capacity reduction."

Demand for surgery has also been down, a trend he attributed to both a shift in health insurance mix due to pandemic-related unemployment, a reluctance by patients to have surgery during the pandemic if it can be avoided, and a backlog of surgical cases from the beginning of the pandemic. He also said the "new normal" in procedure volumes could end up being lower than the "old normal", at least for a few years.

What is the current volume of surgery cases as a percentage of 2019 levels?

Bill Hawkins, a retired Medtronic CEO, and chairman of the board at Duke University Hospital, said that as of this week, Duke is performing record levels of surgical cases.

"Honestly I would not have expected things to have rebounded as quickly as they have but we are about 102% of prior year volume. A number of those cases are backlog cases, and we expect to work through the end of the backlog probably about the end of October," Hawkins said. "We had about 7,000 cases backlogged due to COVID. At the same time, with the amount of new cases coming in, we think that by the end of October/November timeframe we could be back to 100% of where we were pre-COVID."

"10 minutes is actually not insignificant for us," he said.

"Exiting June we saw interventional procedures at 80%, in July we saw that go up to 85%, and you could see that vary by acuity of the procedure," Polen said.

Polen said areas like hernia surgery and procedures for peripheral vascular disease have been more on the robust side, while procedures that are fed by screening methods like a biopsy or a mammogram have been a bit lower. Beyond procedure volume, general patient visits and non-COVID testing volumes saw about 75% of normal in June, and about 80% of normal in July, he added.

Stryker CEO Kevin Lobo said Stryker has seen a V-shaped recovery in procedure volumes in the realm of spine surgery.

"We're tracking north of 80% in those procedure areas," Lobo said, adding that some of the volume has shifted to an ambulatory surgery centers as patients seem to be more open to having an outpatient elective procedure at a surgical center as opposed to at a hospital.

He also said the pandemic impacted some areas of surgery that he would not have expected to be impacted, such as stroke-related and trauma-related interventions.

A good portion of Stryker's business comes from capital equipment sales, and Lobo said that, surprisingly, capital equipment purchases have been less impacted by the pandemic than he would have expected, which he attributed to the CARES Act stimulus package that provided funding for hospitals in late March.

Nacho Abia, chief operating officer at Olympus and CEO of Olympus America, noted similar trends. He estimated that Olympus' procedure volumes will return to normal sometime between now and next Spring, with some types of surgery returning to normal volumes faster than others.

Abia said an increase in telemedicine adoption and changes in the way care is provided will potentially impact procedure volume recovery or even the way in which the recovery will occur.

"We will be creating the new normal as we get into it," he said.

What does the future hold for surgery? 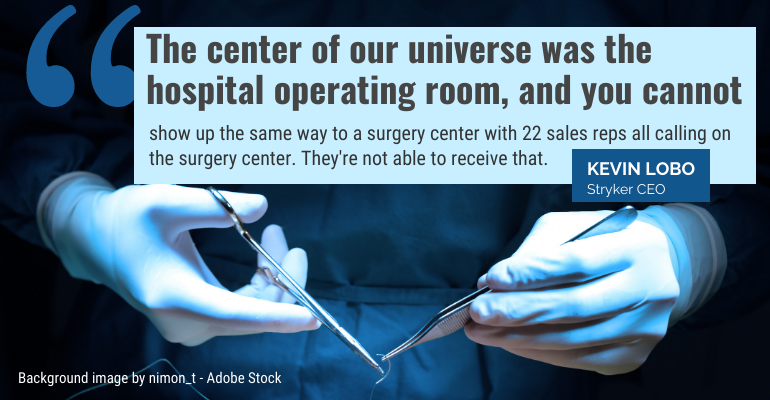 "I think things are going to change," Hawkins said, adding that more of the pre-op and post-op care will occur at patients' homes rather than in a healthcare setting. For example, there are a number of things that have traditionally been done in a hospital setting to treat congestive heart failure and COPD that are going to be done at home with the help of emerging technology, he said.

In terms of preparing for future public health emergencies and supply chain disruptions, Hawkins said Duke is putting more focus on working with companies that have more diversified manufacturing operations so that the hospital does not find itself in a single-source deal with a company that may only have a single manufacturing plant.

Lobo said that most of Stryker's business involves procedures that can't be performed at home, but that doesn't mean that alternative settings like surgical centers won't work.

"There is a monumental shift that will occur over the next decade of procedures moving out of the hospital toward surgery centers," Lobo said. "This is already a movement that had started prior to the pandemic, and it's just accelerating tremendously. What's interesting about the pandemic is that patients are actually really happy [about the shift to surgery centers]."

Before COVID-19, Stryker's patients were somewhat reticent about going to a surgery center, he said.

"Now the idea of going home the same day is very appealing. They just don’t want to be in the hospital around other sick people, and a lot of the rehab can happen at home," Lobo said. "Telerehab will be big in the future."

"We've had to change our company. The center of our universe was the hospital operating room, and you cannot show up the same way to a surgery center with 22 sales reps all calling on the surgery center. They're not able to receive that," Lobo said. "I think the medtech companies that are in the hospital OR as the center of gravity have to change their approach and really have a different offense for their surgery centers. It's a big change for us."

"What I'm hearing from the surgeons that I speak to is it's working better than they thought," Lobo said. "Instead of having two or three in-person visits [prior to surgery] they just have one and they can do the first couple of screens virtually. I'm not sure about the pace of it, but I do believe it's here to stay."

Polen had a unique perspective to share as the spouse of a breast surgeon.

"I saw her go through telemedicine from our home office and not liking it in the beginning and complaining to me about it, but now being a big fan of it," he said, adding that it is becoming more effective as surgeons learn to integrate virtual patient visits into their workflow.

One silver lining in all of this is that the shift away from the hospital setting is creating "a tremendous innovation opportunity," Polen said.

Polen said that one of his colleagues recently had knee replacement surgery and is now wearing a brace after surgery with a computer on it that took measurements at regular intervals.

"They had way more insights doing this virtually than they ever would have had physically going in person because this device is measuring exactly how much they're angling [the knee] and they were excited about the process," he said. "This was the second time they have had knee surgery and they said this is actually a much better experience than when I was having to go in, so I just use that as an example of innovation [driven by COVID-19].

Hawkins said Duke is investing much of its capital allocation not in the hospital but in these alternate care sites like the ambulatory surgery centers.

"Payers are realizing that's where more cost-effective care can happen, so reimbursement is following in a way that will drive much more outpatient care," Hawkins said. "So this is a big shift."