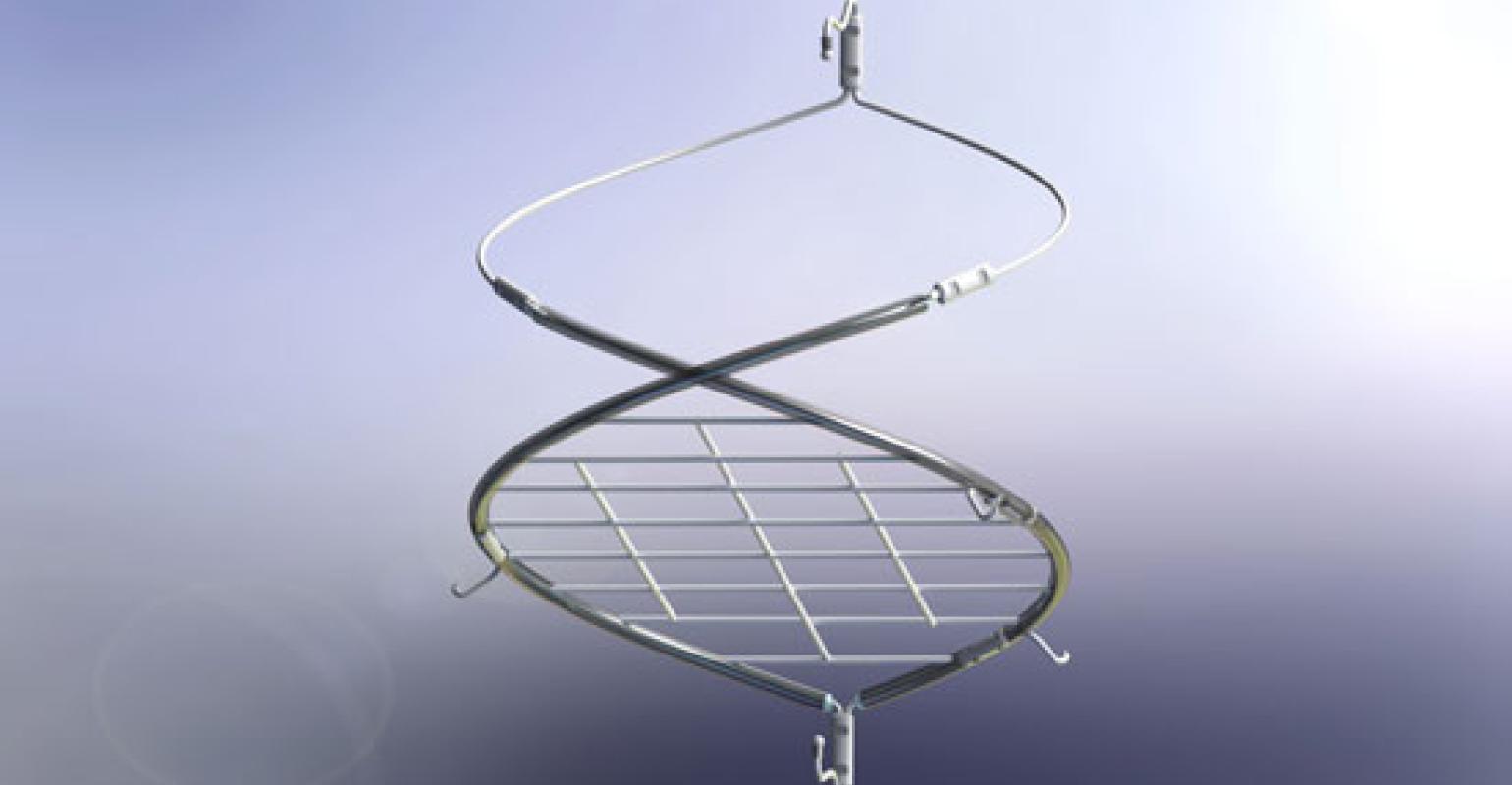 Now cleared by FDA, a retrievable inferior vena cava filter (VCF) from Crux Biomedical (Menlo Park, CA) could be a game-changing technology. VCFs, which are used to help prevent pulmonary embolisms in at-risk patients, are in high demand. An estimated 259,000 VCFs will be deployed this year. Yet the basic design of VCFs had remained largely unchanged for decades before the development of the Crux device. In 2010, FDA issued an alert outlining problems linked to the available devices, including their tendency to tilt, migrate, or fracture after placement.

Now cleared by FDA, a retrievable inferior vena cava filter (VCF) from Crux Biomedical (Menlo Park, CA) could be a game-changing technology. VCFs, which are used to help prevent pulmonary embolisms in at-risk patients, are in high demand. An estimated 259,000 VCFs will be deployed this year. Yet the basic design of VCFs had remained largely unchanged for decades before the development of the Crux device. In 2010, FDA issued an alert outlining problems linked to the available devices, including their tendency to tilt, migrate, or fracture after placement. In addition, the available devices could be difficult for clinicians to retrieve.

To address these issues, Thomas Fogarty, MD; Frank Arko, MD; and a group of engineers got together in 2004 to design a new vena cava filter from scratch. They ended up creating a device markedly different than VCFs currently on the market and began testing the device, ultimately launching a clinical study. At the Society for Interventional Radiology Meeting held March 24-29 in San Francisco, the results of a pivotal study were released documenting a 98% success rate for the device (both placement and retrieval) along with an average retrieval time of 7 minutes.

To learn more about the device, MD+DI reached out to the company’s CEO, Mel Schatz, who shared his thoughts on the device and FDA’s recent clearance of it.

MD+DI: What is your opinion on FDA’s clearance of the device? Earlier, Thomas Fogarty, MD said he was cautiously optimistic that the FDA would approve the device relatively quickly.

Mel Schatz: It has been an interesting eight-year effort. You have a certain advantage when you design a product from scratch. We feel very confident that the design changes that we made are the most significant in probably 40 years. We are bringing something to the market that has the advantage of a bi-directionally retrievable device that can be anchored in the vena cava without worrying about perforation. In addition, it conforms to the IVC so it doesn’t tilt and is built more to suit the dynamics of the vessel. I think those are the reasons that we have been able to gain such high retrievability and such favorable data.

I know Dr. Fogarty was very optimistic of a fast review. Regarding the review process, we would have to say that the FDA was very proactive in moving the process along and very motivated. But I think everybody’s experience in the regulatory process is different and dependent on the product they are seeking approval for.

Like many other firms seeking clearances, we are seeing new standards and for most of the companies, including Crux, it seems like it just takes longer than you expected or it should. We are hopeful that the reforms, both from MDUFA and other legislative initiatives, will continue to make the process more predictable and transparent. I think that is critical to our ability to get new therapies out in a more timely manner so the United States can maintain global leadership in medical technology and so patients in the U.S. can benefit more rapidly.

In summary, we had a mostly positive experience with FDA. We would have liked to have it faster but I think that is probably true of all medical device companies right now.

MD+DI: It seems like there was a real market need for a novel vena cava filter design—especially considering the warning FDA released on VCFs in 2010. Do you think that helped accelerate the path to market for the Crux device?

Schatz: The FDA never made comments to us in that regard. I do believe that the alert that came out in 2010 was an important milestone in recognizing that some of the products had not been performing to physicians’ satisfaction. That might have had some impact on the FDA but we did not have any specific reference to that in the review process.

MD+DI: The design for this product is quite a bit different from other VCFs. What are your thoughts on its market potential?

Schatz: I am very confident about the advantages of our device, which were echoed in the excellent data that we achieved in our recent pivotal trial. The results demonstrated low complication rates and excellent retrievability and offered more choices for the physician along with a very fast learning curve.

I believe physicians will have more confidence in using the Crux device. Based on our clinical experience, I believe it will have very wide acceptance in the marketplace. Physicians who participated in the study were very complimentary and seemed anxious to use the device on a routine basis. I think the inquiries that we have seen subsequent to the Society for Interventional Radiology (SIR) presentation and the recent FDA clearance suggests that there are a lot of physicians who are ready to use it.

I would be surprised if within a couple of years, the Crux VCF is not a market leader in this category. This goes back to what I said earlier about designing the device from scratch: we were able to design the device around the dynamics of the inferior vena cava and make the product work accordingly.

MD+DI: Dr. Fogarty had mentioned that Crux was exploring another potential application of the technology related to placement of aortic valves. Would it be possible to get an update on this?

Schatz: A couple of years ago, it was pretty obvious to us that after designing a filter for a large vein such the IVC, we could modify our device design and size it appropriately for virtually any lumen or vessel in the human vasculature. We did not have the time or resources to expand our efforts until the last couple of years.

We started hearing the enthusiasm about percutaneous aortic valve repair. The Partner trial showed that percutaneous valve patients experience three times the stroke rate versus the surgical arm, emphasizing the need to minimize strokes when you are deploying that new valve. It comes down to an issue of protecting the carotid vessels.

We felt we could design a more effective approach to trap clot, plaque or pieces of calcium that may result from the valve repair procedure. We began prototyping efforts.

We have currently developed a very unique catheter based device that can be used to protect the carotids during percutaneous valve procedures. As we talk to more cardiac and vascular surgeons, there is quite a large interest in a protection device if it is both easy to use and cost effective in a number of complex cardiovascular procedures where strokes are of concern. We are very confident that the platform we have developed for the IVC will be of value in many other areas of the human vasculature.