Claret Medical said its Sentinel device reduces strokes by 63% in the first 72 hours after TAVR. 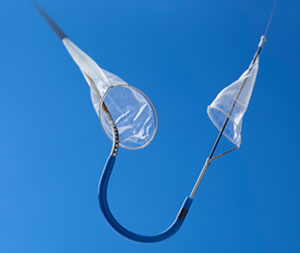 TAVR has become a popular treatment method to replace a diseased aortic heart valve in a minimally invasive way, but some studies have found that nearly one in 10 patients have a clinically-apparent stroke, usually within 72 hours. Researchers believe these strokes are likely caused by debris that breaks loose from the native heart valve or aortic wall during the procedure and travels to the brain.

James Hallums, senior vice president and international general manager at Claret Medical, told Qmed during a recent interview that TAVR patients are often more concerned about stroke than the risk of dying on the table.

In the pivotal SENTINEL randomized controlled trial, use of the device reduced strokes by 63% in the first 72 hours after TAVR (from 8.2% for unprotected patients, to 3.0% for protected patients), and maintained a substantial difference at 90 days, according to Claret Medical.

There are other embolic protection devices on the market for carotid and peripheral interventions, but the Sentinel system is the first that is specifically designed for TAVR procedures.

"Anything we can do as clinicians to reduce the risk of brain injury is extremely meaningful," said Martin Leon, MD. "The 63 percent reduction in clinical strokes in the first 72 hours after TAVR, combined with the fact that one in four patients had an average of 25 particles of debris collected that were visible to the naked eye, is striking."

Leon, of Columbia University Medical Center and new York-Presbyterian Hospital, served as chairman of the Sentinel trial clinical steering committee. He reported that the Sentinel device delivered safely, added minimal time to the procedure, and performed as intended.

FDA clearance follows a positive advisory panel hearing in March. The panel recommended approval of Sentinel based on a lack of alternative options and a low safety risk, but raised questions about the clinical efficacy of the device. Because it was a de novo application, the agency asked the advisory panel for input, but did not require a formal panel vote.

Most of the panelists seemed unconvinced that the device actually reduces the risk for stroke, or that it improved neurocognitive outcomes, and there was some criticism regarding the relatively small patient number in the pivotal trial (363 patients at U.S. and German centers).

Technically, the trial was not designed to show a reduction in stroke. Rather, it was designed to provide imaging and corroborating clinical evidence that the device reduces ischemic events in the brain, as detected by diffusion-weighted MRI.

The safety results ultimately won the panel over. The trial met its primary safety endpoint of major adverse cardiovascular and cerebrovascular events (MACCE) at 30 days, with reported MACCE in the protected Sentinel group at 7.3%, significantly lower than the pre-specified historical performance goal of 18.3% and the rate of 9.9% seen in the control arm.

"The science behind the device has set a high bar for other embolic protection devices to meet and its safety record is indisputable," said Azin Parhizgar, Claret Medical's president and CEO.

The company said it is working with the Centers for Medicare and Medicaid Services to develop a reimbursement pathway via a new technology add-on payment, and has already established an ICD code for reimbursement of the Sentinel device.