Would You Take a Poop Pill? 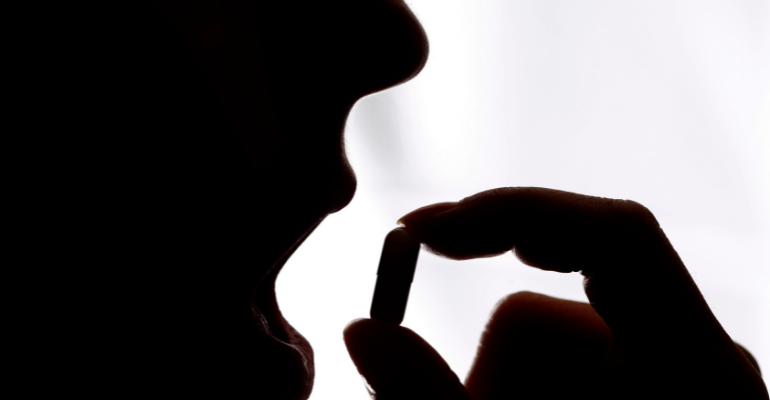 Fecal transplants have been proven effective at treating C. diff, but current delivery methods are lacking. Is stool encapsulation the answer?

As someone who has struggled with inflammatory bowel disease (IBD) for more than half my life, I'm pretty comfortable talking about poop. But even I cringed when I learned that researchers are now investigating fecal transplant pills. In other words, poop pills.

Fecal microbiota transplant (FMT) research has shown a lot of promise for treating Clostridium difficile infection (C. diff), which is a severe intestinal infection you can get after being treated with antibiotics or chemotherapy. C. diff kills roughly 30,000 people in the United States each year, and I had the unfortunate experience of watching my grandmother die from the infection back in 2010.

The problem is, there isn't a really good way to collect, process, and deliver fecal transplant samples. Colonoscopy, nasogastric tube (NG tube), and enemas are the most common methods used today, but they all have drawbacks. So maybe poop pills, or fecal transplant pills, is the way to go.

The problem with fecal transplant capsules is that there really isn't an easy way to collect and process poop samples for encapsulation. That's why Tend Health, a Seattle, WA-based startup founded in 2020 as a University of Washington spin-out, developed a device intended to standardize, simplify, and reduce the cost of fecal transplant for patients suffering from C. diff.

Clinicians at Massachusetts General Hospital (MGH) recently began a study to validate Tends' Gut Microbiome Collection and Prep (CAP) device to prepare FMT capsules for patients with recurrent C. diff infections. The study aims to show whether patients treated with capsules produced by the Tend device recover in a similar way to patients treated using the current standard of care. Patients will be recruited and randomized in a 1:1 ratio. Half the patients will be treated with oral capsules produced by Tend's CAP device while the other half of the patients will be treated using conventional methodologies. Elizabeth Hohmann, MD, an infectious disease specialist at MGH whose research on FMT has been published in the New England Journal of Medicine, is the lead investigator.

I'm still not sure how I feel about the idea of taking poop pills. However, after speaking with Tom Lendvay, MD, the company's chief medical officer, I can at least see the value of Tend's technology. Read the Q&A below, which has been edited for length and clarity, and let us know your thoughts in the comments.

Beyond C. diff, what other conditions have been treated with a fecal transplant?

FDA has said that to use [FMT] for other diseases or conditions it requires being done under research protocol. So, if you’re a clinician who has patients who you think the microbiome transplant may actually help, and they’re not having recurring Clostridium difficile infections, then the most you can do right now is refer them to DIY videos on YouTube on how to do this. So, it’s kind of a Wild West scenario for people. And of course, a lot of people don’t want to do that, or they don’t have the capability.

Regulatory matters aside, what are the other barriers to adoption for fecal transplant?

Let’s say you’re a researcher or a clinician treating recurrent Clostridium difficile patients. The processing of the donor samples and the way that patients actually receive the samples is very onerous. The user experience is terrible. There isn’t a standardized, simple way to process samples and administer the samples to patients. Right now, patients have to undergo invasive colonoscopy, most commonly, or they have to have a tube placed through their nose, down their throat, into their stomach (an NG tube). An enema is another way it’s administered. But basically, that whole user experience is terrible.

So, why do you think pills are a better delivery method for fecal transplant and why isn’t it being done more often?

What are people used to doing? They’re used to swallowing capsules for diseases. There’s really no system that people can do easily to actually prepare a sample into capsules for oral ingestion, so that’s another barrier to this. And then, if you’re a doctor who wants to do this you need space, time, you need a way to process the sample, and unless you’re in a laboratory setting that’s usually not accessible. So, Tend is all about improving the user experience for the clinicians and the patients and improving access to this potentially lifesaving intervention.

Tell me about the CAP device and how you came to this solution?

I'm a pediatric urologist at Seattle Children's and a professor of urology at the University of Washington, and I have taken care of patients who had recurrent Clostridium difficile infections – and Clostridium difficile infections related to antibiotics that I've prescribed – so I know this is a really horrible disease. I actually started having patients' (parents) ask me if there was a way they could bank their children's microbiome before doing the surgeries that require the antibiotics that I perform, which really gave me an awareness that people are starting to learn about microbiome not just in the medical profession but laypeople are learning about this. ... One of the things that is clear is we don't have a standard way to process the samples. The CAP device is a manually-operated device that allows the microbiome sample from a donor to be collected, and then it is filtered because you want to filter out large particulate matter, and then it is homogenized because you want it to be a fairly uniform consistency, and then driven into capsules that are double enteric coated, so they're capsules that release well beyond the stomach in the intestines and they're acid-resistant capsules. We're not a therapeutics company so we're not giving a regimen, we're not saying to doctors, 'give six pills three times a day,' ... we're just providing the clinicians with an easy way to process it. We can do this in about a tenth of the time that it would normally take to process the sample, and the administration is at least a tenth of the cost of doing a colonoscopy.

You mentioned that the capsules are double enteric coated ... why is that important?

It's important for a few reasons. From the scientific side, we really don't want the capsules to release the microbiome into the stomach because there's acid there and the acid could degrade the good bacteria that help increase the (microbial diversity) ... Then there's the ick factor. You really don't want these opening up in the stomach.