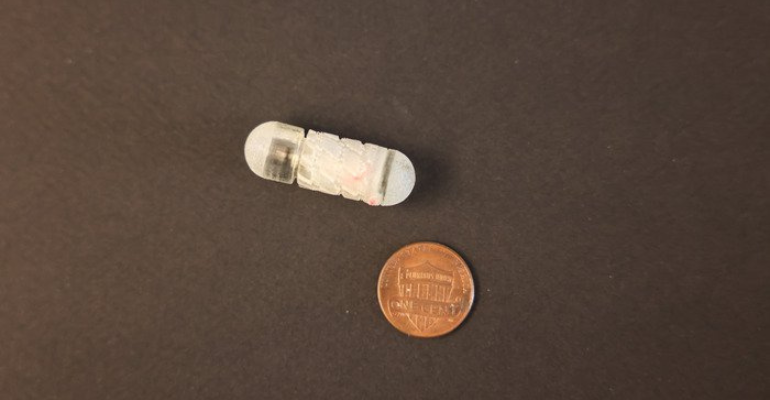 MIT researchers developed a capsule with a robotic cap designed to tunnel through mucus to allow the capsule's contents to penetrate the digestive tract.

Traditional oral capsule delivery medications cannot pass through the mucus barrier of the GI tract, which is why large protein medications, insulins, and nucleic acids need to be infused in a hospital setting or injected into the digestive tract. A new capsule with a robotic cap, developed by MIT and called RoboCap, is designed to tunnel through mucus, pushing it aside to allow the capsule’s contents to penetrate the GI tract.

Shriya Srinivasan, research affiliate at MIT’s Koch Institute for Integrative Cancer Research and a junior fellow at the Society of Fellows at Harvard University, envisioned the capsule which is strong enough for the body’s conditions and has the agility to move through the mucosal lining. The capsule design is covered by a protective coating to withstand the high acidity of the GI system and is equipped with a mechanism that rotates the capsule, helping it to tunnel through the thick mucus that keeps standard capsules out.

How RoboCap is designed to tunnel through mucus

Once the capsule reaches the pH level that is indicative of the small intestine, the gelatinous coating of the capsule dissolves, a process that sets the motor inside RoboCap in motion. The device then spins through mucus and eventually deposits the capsules medication at the epithelium of the small intestine. The outer capsule also has small studs that help to push away the mucus as the vitamin-sized pill moves.

"I thought that if we could tunnel through the mucus, then we could deposit the drug directly on the epithelium," said Srinivasan, lead author of the study. "The idea is that you would ingest this capsule and the outer layer would dissolve in the digestive tract, exposing all these features that start to churn through the mucus and clear it."

The study is published in Science Robotics.

The MIT team has successfully delivered vancomycin and insulin to the small intestine. In a pre-clinical study, the delivery mechanism increased the amount of drug delivered by 20 times to 40 times. The capsule’s mucus tunnel is reformed in the body in a short period and the capsule passes through digestion, according to the MIT researchers.

RoboCap has potential for use in delivery to other portions of the digestive system, including treatment for ulcerative colitis. With adjustment to the pH that triggers capsule dissolution, the RoboCap could potentially be used to deliver therapeutics to other GI areas such as the colon or stomach, the researchers said.

While currently in early research, Srinivasan told MD+DI the team is looking to partner with organizations or companies interested in taking the device to the next stage, finishing pre-clinical efficacy, fine tuning, and then into clinical trials.

Funding for the research was obtained by the National Institutes of Health and MIT's Department of Mechanical Engineering.

Changing the Game for Diagnosing and Treating Inflammatory Bowel Disease (IBD)
May 19, 2021