What's the CEO of Medtronic Doing At CES? 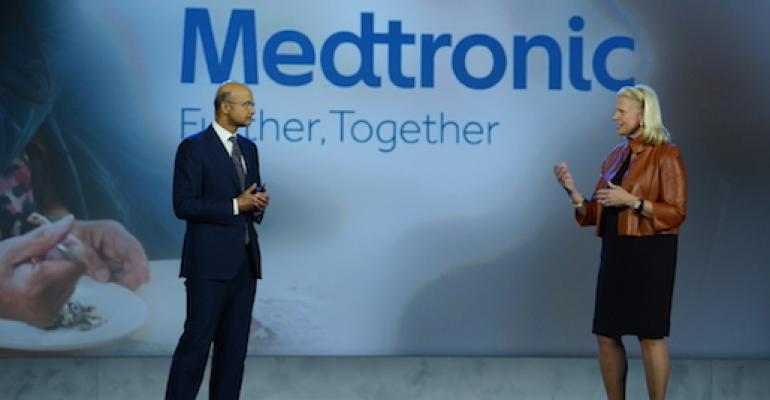 Omar Ishrak, CEO of Medtronic, appears on stage for the first time at the 2016 Consumer Electronics Show to talk about a new cognitive app developed with IBM Watson Health.

Omar Ishrak, CEO of Medtronic, appears on stage for the first time at the 2016 Consumer Electronics Show to talk about a new cognitive app developed with IBM Watson Health.

If there was every any lingering doubt that the consumerization of healthcare had come to the medtech industry, the above image of Medtronic CEO Omar Ishrak sharing the stage with IBM CEO Ginni Rometty at the 2016 Consumer Electronics Show (CES) in Las Vegas Wednesday should dispel it firmly. This marks the first time that Ishrak has attended CES as Medtronic's CEO.

Back in April 2015, IBM announced the creation of IBM Watson Health, a standalone unit, as well as partnerships with Medtronic and other healthcare firms to create solutions driven by Big Data analytics.

On Wednesday Ishrak and Rometty announced a fruit of that partnership - the unveiling of a research prototype concept for a first-of-its-kind cognitive app that can help to detect critical patterns and trends for people with diabetes to making daily management of diabetes simpler. In other words the reams of data collected by Medtronic's wearable devices - the insulin pumps and continuous glucose monitors - will be put to work by Watson's data analytics that can crunch innumerable data points to glean important insignts.

In fact, the yet-to-be-released cognitive computing app offers a tantalizing possibility: In a research study of 600 patient data that was de-identified, findings suggest that cognitive computing can predict a low-glucose event three hours before its onset.

If that is true, then diabetes patients can take actions to prevent a dangerous episode from taking place. That is no mean feat given that diabetic hypoglycemia is an effect of insulin therapy that often lands people in the ER.

Medtronic and IBM plan other innovations that can be brought to transform diabetes care, and this can be seen as a way to achieve what Ishrak has said he wants to do - address the broader type 2 diabetes market, instead of narrowly focusing on the type 1 market that it has so far done.

Also, it transforms the medtech company from just a maker of widgets - in this case pumps and sensors - to a provider of solutions that can help in management of a chronic disease.

Partnerships such as the one between Medtronic and IBM and any commercialized solutions emerging out of such collaborations will help companies to own a disease and effect change on a population level.

And population health management is one of the vaunted triple aim in healthcare.