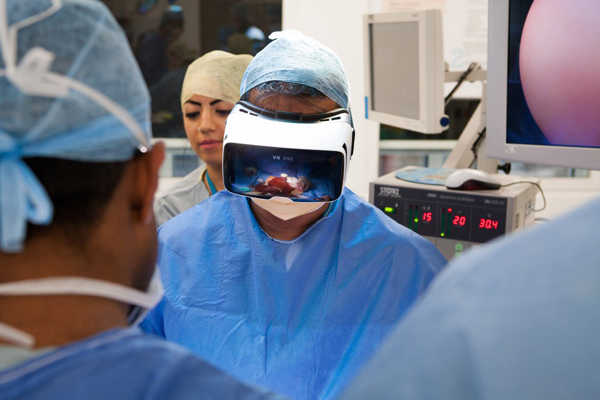 When a London surgeon and co-founder of a virtual and augmented reality company removes a tumor from a patient's colon on Thursday, April 14, the whole world could be watching.

Shafi Ahmed, MD, will don Google Cardboard, a low-cost VR system, so a 360-degree camera mounted over the operating table in the Royal London Hospital can livestream the procedure globally in VR. The 70-year-old man who is being operated on is excited about his surgery being used to educate surgeons worldwide, according to Ahmed's company, Medical Realities.

That's the whole point of the company. Co-founded by self-described augmented and virtual reality expert/evangelist Steve Dann, Medical Realities seeks  to train surgeons in low-income nations via AR and VR to reduce the "gross disparities in access to safe surgical care worldwide" cited in a studylast year by The Lancet Commission on Global Surgery.

Anyone with the Medical Realities mobile app and a Cardboard headset can watch the surgery, scheduled for two to three hours beginning at 8 a.m. Eastern time. The video stream will be delayed by about a minute just in case the surgery goes awry, according to a reportfrom Wired UK.

Ahmed was the first surgeon to broadcast an operation in real time via Google Glassto 13,000 students around the world. He answered questions aloud as they appeared in the bottom corner of his wearable device. A cancer specialist, Ahmedalso serves as associate dean at Barts and The London School of Medicine and Dentistry.

With continued progress in AR and VR technology, Ahmed came to believe that these systems could help educate many more OR specialists and also reduce health disparities globally, according to the Wired report. The Lancet Commission estimates that 5 billion people worldwide have no access to safe and affordable surgery and anesthesia.The world would need about 2 million more surgeons, anaesthetists, and obstetricians over the next 15 years to achieve that goal.

Ahmed has witnessed the lack of infrastructure, training, equipment, and even cadavers on his many trips to medical schools in impoverished nations, including his native Bangladesh, according to the Wired report. He believes radical change is needed to attain the Lancet Commission's goal, the magazine said.

"Let's focus on how we scale up to be able to train many people around the globe, in different parts of the world, especially in low-income countries," Ahmed told Wired. "When it comes to that, helping a few people won't solve the world's problems. But if people can use an Oculus, or a Cardboard to witness surgery on their smartphones, you can do much greater good."