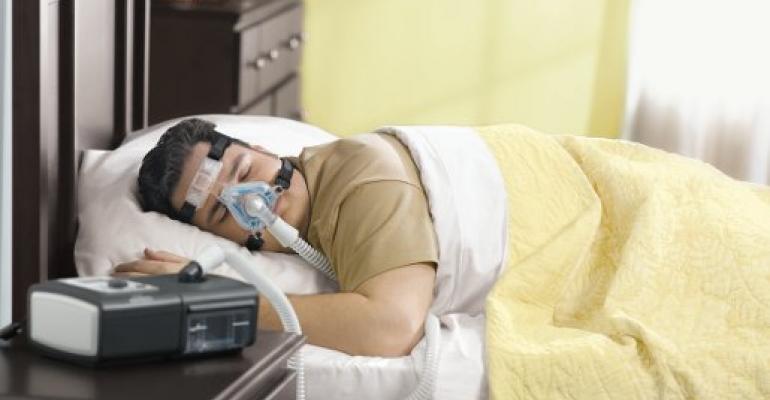 Philips Respironics used a digital health blitz to get sleep apnea patients to comply with CPAP therapy, and the results were dramatic.

Telling sleep apnea patients they need to use a continuous positive airway pressure (CPAP) machine is kind of like telling smokers they need to quit. They know it's good for their health, but it's hard to change.

Patients have reported that CPAP devices, which force air through masks to keep them breathing steadily, are noisy, uncomfortable, even claustrophobic. Healthcare providers have tried using education, apps, and coaching separately to get patients to stick with the program, without much success. CPAP adherence rates, which matter not only to patients' health but to companies seeking CMS reimbursement, remain abysmal. CMS requires a minimum of four hours of CPAP use over 70% of the nights during a consecutive 30-day period within the first 90 days of use.

Philips Respironics, a division of Royal Philips that makes CPAP devices, decided a full-court press that combines education, apps, motivation, and live coaching in the early days of patients' CPAP use might make a difference. The company's internal study showed dramatic improvements, according to a prepared statement.

Philips analyzed data from 4383 new CPAP patients who used its Patient Adherence Management Service (PAMS) and a control group of 54,455 new patients not participating in PAMS but who were registered with the company's database. The analysis showed that 79.5% of the PAMS participants reached the Medicare definition of CPAP adherence within 90 days, compared with 63% in the standard care control group. The PAMS patients attained nearly 66% and 75% CMS compliance adherence rates at 30 days and 60 days respectively, compared with 50% and 59% of patients in the control group.

PAMS uses the company's CPAP devices, software, patient engagement app, and about 40 coaches based in Pittsburgh to answer patients' questions over the phone.

Aloia has been studying CPAP adherence for 20 years.

The disorder affects about 2% of women and 4% of men in the middle-aged work force in the United States, with higher prevalence rates among the elderly and African Americans, according to one study published in 2013.  Untreated, obstructive sleep apnea is associated with impaired cognition and mood, hypertension, vascular disease, and increased risk of motor vehicle accidents risk.

Patients learn all this but still resist using the devices, despite healthcare providers' and manufacturers' best efforts.

Patients don't feel confident using CPAP or trust that it will make them feel better, and have also complained of not having enough support, he added. Durable medical equipment companies, under pressure from CMS and competition, don't have the time to provide that support, according to Aloia.

"There's been a whole shift in the entire sort of healthcare milieu that has made it in some ways even harder to help a user to adopt this somewhat difficult therapy," he said.

Philips has coached about 150,000 patients since it began piloting live coaching for CPAP users in 2012, Aloia noted. The company debuted a patient app in 2013 and updated it in 2015. Now it's offering to sell the combination to durable medical equipment providers. The company declined to reveal prices.

Aloia has found that patient adherence to a CPAP regimen is as much psychology as it is anything else.

Nancy Crotti is a frequent contributor to MD+DI. Read more of her work at http://nancycrotti.com.