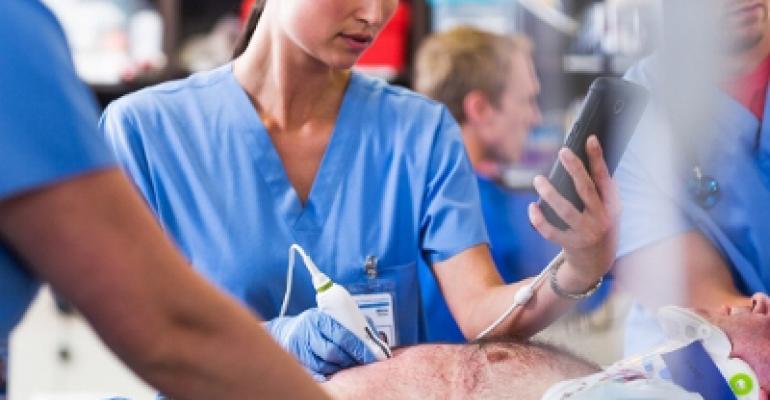 This marketing image from Philips shows the Lumify in action.

The Dutch multinational made a major design move that could make ultrasound far more mobile and available than it is presently.

Royal Philips recently announced that it will start selling an ultrasound transducer that simply plugs into a smart tablet via its USB port, running off an app on the tablet.

The first-generation Lumify ultrasound wand is already 510(k) cleared with FDA, and is expected to hit the U.S. market later this year. Lumify is presently compatible with the Android Nexus 7-inch tablet. Compatibility testing on several additional Android devices (Android 8-inch and 6-inch devices) should be complete in the coming months, and there are plans to make Lumify compatible with Apple device in the future, according to a Philips spokeswoman Kathy O'Reilly.

Call it the birth of app-based ultrasound.

"App-Based Ultrasound provides valuable information to the right people at the right time. It's designed to drive transformation in care delivery and digital health--a dynamic combination that can extend the reach of ultrasound in a remarkable way," Vitor Rocha, CEO of Ultrasound at Philips, said in a news release.

The news out of Philips provides another great example of how consumer tech devices such as smartphones and smart tablets continue to change the game in the medical device industry. Columbia University engineers, for example, have been working on a smartphone dongle to detect HIV, and FDA has granted AliveCor's smartphone-based heart monitor over-the-counter clearance.

The initial Lumify is designed for emergency departments and urgent care centers, and other clinical setting. Philips expects more ultrasound transducers, applications, and services. It has even created an ultrasound consortium of experts to create new apps. Lumify could increase the potential for health practitioners to more readily determine whether an internal injury is serious.

"It's clean technology. It's an interesting model adaptation. How it transforms medical imaging has yet to be seen," says Bill Betten, vice president of business solutions at medical product development company Logic PD (Minneapolis). Betten worked on portable ultrasound innovations while he was at 3M Co. in the 1990s and considers Philips' Lumify as another important step in advancing the technology.

Betten also thought it intriguing that Philips plans to sell Lumify through a subscription-based model. "You can sell something once, and you've touched that client the first time. But if you have a service you keep providing, you keep touching that customer. You have an opportunity for ongoing revenue," Betten said.

Smart consumer devices such as smart tablets and smartphones have their limits, however, Betten noted.

Some potential challenges Betten raised: When is the data relevant and when is it not? Philips wants to make Lumify available for almost all tablets, but which will truly have the best displays for the ultrasound? Will Philips be on top of all the innovations and updates to various tablets and update Lumify accordingly?

"In heavily trafficked, high-stress environments such as the emergency department, access to technology like app-based ultrasound that can promptly direct treatment is critical to both the provider and patient in achieving positive health outcomes," says J. Christian Fox, MD, clinical emergency medicine professor at the University of California, Irvine.