HomeTechnologiesDigital Health Ocutrx Harnesses the Power of AR for Vision Correction
Recent
Technologies
J&J MedTech Lands Clearance for INHANCE Shoulder System
May 19, 2022
The Robot Will Do Your Angioplasty Now
May 18, 2022
XACT Is Changing the Tone of Robotics in Healthcare
May 18, 2022
Medtronic Touts Cusp Overlap Technique in TAVR
May 18, 2022

Ocutrx Harnesses the Power of AR for Vision Correction 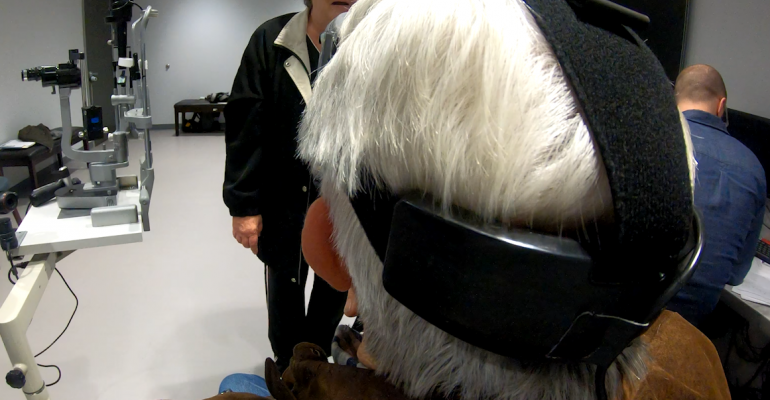 The Irvine, CA-based company has presented results of the first pre-pilot trial for its Oculenz AR glasses.

A start-up is using the power of augmented reality to help patients plagued with Advanced Macular Degeneration (AMR). Ocutrx Vision Technologies has developed the Oculenz AR glasses and has successfully completed the first pre-pilot trial for the technology.

Michael Freeman, Ocutrx founder and CEO, told MD+DI the company was “creating a medical device that helps correct macular degeneration. We’re in the generic category, so we’re 510(k) exempt on the regulatory pathway. We have other uses like amblyopia and in the surgery room that will require a regulatory pathway.”

The Patient Study was assisted by Scott Hewitt, CCRC and Deborah Hardison, COMT. Mean age of the subjects was 68 (54-76). The best-corrected acuity was from less than 20/200 with near (or no correction) improving to 20/63 with the Oculenz ARwear without magnification. Mean CPS improved from 0.96 logMAR (L/R) with near or no correction to 0.61 (L) and 0.58 (R) logMAR with the Oculenz ARwear at no magnification.

Improvement ranged up to 5 lines on the logMAR chart without magnification. All subjects had difficulty reading and most subjects had not been able to read for years prior to wearing Oculenz. All subjects were able to read at a standard reading pace at 30-point type (J-16); with some reading down to 12-point type (J-10) in just one session wearing the Oculenz. These results suggest that with “neuro-adaptation” subjects learned to comprehend the entire modified view and ignore the blind spot in reading.

“Everyone in this study had not read in at least one-to-three years and could read no more than two letters on the top line of the logMAR chart.”

The trial subjects initially used a self-calibration module, where the digital AR headset identified the subject’s scotoma (scotoma marker), which correlated the area of non-vision with the AR headset. The self-calibration results were compared to a Fundus Autofluorescence photo of each eye taken prior to the testing.

Freeman went into a bit more detail about the science behind the technology.

He then added, “it then goes to a second phase where we do a dynamic test where they see shooting stars. At the end of the test the headset knows where the analog defect is in the back of the eye. The magic is within five milliseconds of it there are cameras on the headset. The camera displays the real world and within five milliseconds we augment that real world and move all the pixels in the streaming video out of the area of the defect.”

While the Oculenz technique does not remove the scotoma, by moving letters and words outside of the geographic area of the scotoma to adjacent sighted areas of the retina, the person can see all letters of a focused word. The Oculenz headset provides a “perceived de-emphasis” of the scotoma and enhanced reading of the letters and letters in a word, as well as enhanced recognition of faces and features of familiar individuals.

Plans now call for the Irvine, CA-based company to conduct additional studies of the technology.

Dr. Thomas A. Finley, MD, head of the Tulsa Retina Consultants and chairman of the Ocutrx Medical Advisory Board, viewed the test as a success.

“Through this groundbreaking pre-pilot study, Ocutrx has been able to explore the capabilities and efficacy of the Oculenz Self-Calibration Visual Field Edge Detection Test and the resulting MRTSV with AMD subjects when performing tasks such reading the logMAR chart, reading paragraphs from the CNEC and facial recognition,” Finely said in a release. “The Oculenz headset was a significant aid for improving functional vision when measured using the logMAR and CNEC.”