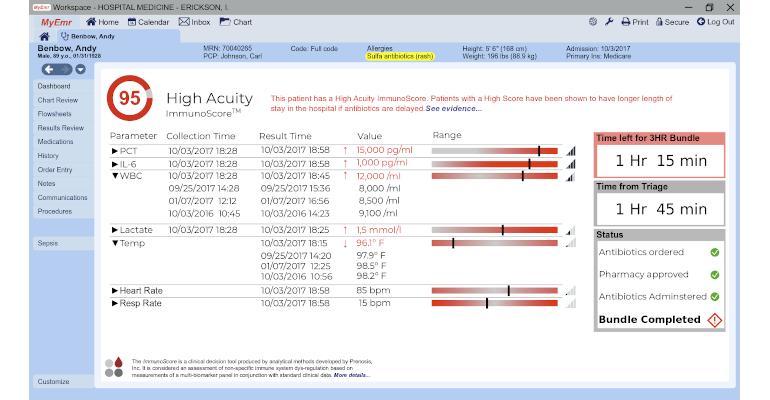 During Sepsis Awareness Month, MD+DI checked in with Prenosis, which developed Immunix for rating a patient’s chances of sepsis, 30-day mortality, elongated hospital stay, and 30-day readmission to the hospital.

And even if patients survive, they can have lifelong consequences.  “Sepsis occurs when you have a very abnormal, unhealthy reaction to infection,” Reddy said. This unregulated immune response can lead to organ dysfunction and even death.

Sepsis is treatable with antibiotics if it is diagnosed in time, but it can explode out of control in hours or days if left untreated. “If [a patient] had just gotten a simple dose of antibiotics two days earlier, it wouldn't have been life-threatening,” Reddy said. “That's why the WHO has called this the number one cause of preventable death worldwide.”

Symptoms of sepsis can be vague and thus hard to diagnose. “The current standard of care [for determining sepsis] is literally a human being,” he said. Reddy explained that a physician or nurse typically uses four parameters to suspect sepsis: temperature, white blood cell count, lactate, and their overall impression of a patient.

“That's how some doctors have been trained for the last 20 to 25 years,” he said. “Unfortunately, that just doesn't work. It's one of the reasons why there remains such a high mortality rate with sepsis.”

Prenosis has developed Immunix, an assisted intelligence system that uses holistic input data from 23 parameters and a machine learning algorithm that provides an ImmunoScore, which gives a rating of a patient’s chances of sepsis, 30-day mortality, elongated hospital stay, and 30-day readmission to the hospital.

“One unique aspect of this product is that it forces the data to be clean at that critical snapshot of time so that you can accurately diagnose [sepsis],” Reddy said. Clean data, Reddy said, means that the system checks to see if the all the needed data is available and to see if it has any errors. “For example, at this point in time, maybe they've done your blood pressure and took your temperature, but they didn't do a heart rate measurement,” he said. The system requires any missing parameters to be filled in with the order of an additional test or additional measurement. This type of assisted intelligence can create better, cleaner data, resulting in better and more precise diagnostics, said Reddy.

The second unique aspect, he said, is that typically not all of these 23 parameters are ordered at the same time. For these patients in particular, the three biomarkers that Immunix looks at help profile the patient's underlying biological state accurately. The biomarkers are Interleukin-6, procalcitonin, and C-reactive protein.

Reddy stressed that this system is what he called “assisted intelligence,” as opposed to artificial intelligence, as it can be used as a tool to help guide the physician, rather than diagnosing alone. “We really like to think of ourselves as a GPS as opposed to a self-driving car,” he said. “It's really about working with the doctor.”

The Immunix system can address desperate hospital needs, said Reddy. Hospitals lose an average of $29,118 per septic patient in the United States. But according to Prenosis, based on a 1,300-patient multistudy, greater than $9.9 B can be realized in potential annual cost savings if ImmunoScore were implemented across the United States.

The Immunix system is expected to received FDA clearance by the second half of 2022.

To increase knowledge about the condition, the Sepsis Alliance has designated September as Sepsis Awareness Month. More information can be found at www.sepsis.org.