Microsoft Band Beats Apple Watch to Market—and It's Cheaper Too 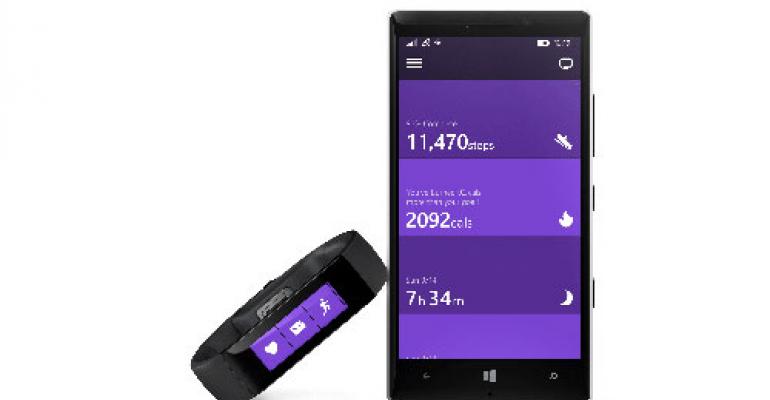 The Smart Band, which is smaller, cheaper, and more interoperable than competing wearable health and fitness tracking devices, went on sale today for $199.

Microsoft Band is smaller, cheaper, and more interoperable than the Apple Watch, and consumers will be able to get their hands on the device, which launched today in the United States, at least two months earlier.

Microsoft Band packs 10 sensors into an 18.5-mm band that—although it does tell time—looks less like a traditional timepiece than competing smartwatches and more like fitness trackers such as the Nike+ Fuelband SE and Samsung Gear Fit. Available for $199, the device costs around $150 less than the Apple Watch will when it makes its debut early next year, and it can also work with Windows Phone devices as well as those running iOS and Android operating systems, something the Apple Watch can't do.

In addition to providing productivity tools such as e-mail, text, and calendar alerts, the wrist-worn device can monitor heart rate continuously as well as track calories burned, sleep quality, and steps, plus provide GPS runmapping.

Microsoft Band is backed by the new Microsoft Health security-enhanced cloud platform—the company’s answer to Apple’s HealthKit and Google Fit. The open platform can store and analyze data from disparate health and fitness devices, such as UP by Jawbone, and services including MapMyFitness, MyFitnessPal, and RunKeeper. It can also “learn” from the metrics it captures to suggest custom workout plans. Examples of insights Microsoft Health can provide include fitness performance relative to work schedule and which exercises burned the most calories during a workout, according to the company.

Soon, Microsoft hopes to enable data from Microsoft Health to be shared with healthcare providers via its HealthVault online health data portal.

“We plan to have a regular cadence of Microsoft Health announcements including additional device and service partnerships, SDK availability, and additional cross-platform applications and services,” Microsoft corporate vice president Todd Holmdahl wrote in a blog on the company’s Web site.

Joe Belfiore, corporate vice president of Microsoft's operating systems group, tweeted that the Microsoft Band is not yet open to third-party developers but that the company is working on that for the future, although he said he didn’t know when it might happen.

Reaction to the device has so far been largely positive.

Though PCWorld senior editor March Hachman wrote that the device looks "as much like a hospital bracelet as anything else" and has similar features to other fitness bands and smartwatches, he also noted that it promises up to 48 hours of battery life (less if you're running GPS), comes in three sizes to fitt different wrists, and is available now.

On the Web site Reddit, user AgentBole commented that the Microsoft Band is a departure from other smartwatches.

“Everybody else is just trying to make it basically like a watch with social and internet features. But this thing went light on that a bit, but instead doubled down on fitness sensors and capabilities. Its also gives up on big screen for more battery power, and its completely multiplatform,” the user wrote. “I'm still not completely sold on this thing, but props for innovation and attempting something else then the rest of the pack.”

Twitter user Eric Lamy (@ewlamy), a self-described fitness geek and quantified-selfer, was more enthusiastic, tweeting, "The biggest draw of the @Microsoft #MSBand is that it looks exactly like what I had hoped the #AppleWatch would be... "