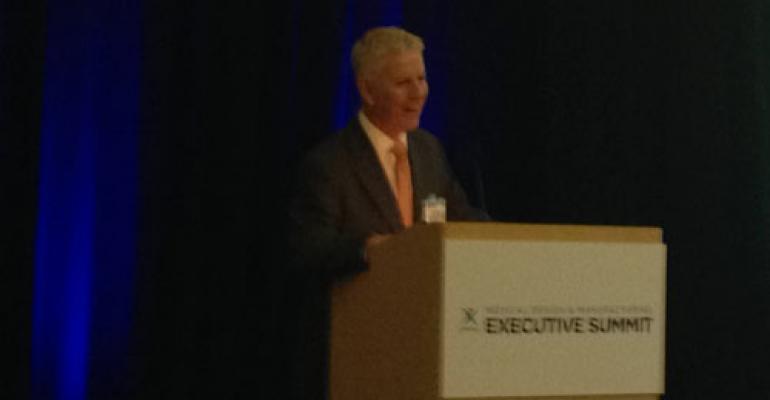 MHealth experts throw data at conference audiences to describe the hottest area in the healthcare sector. But at the MD&M Executive Summit in Anaheim, California, one panelist used humor instead.

The usual stats are thrown out: Zillions of people will own smartphones by the year 20XX and they will have downloaded innumerable health apps. And by 20YY, the market for mHealth will grow to a gazillion dollars.

But at the MD&M Executive Summit at Anaheim, California, Liam Pender, CEO of product design and development company Egret Technologies, took a different tack in describing trends that he believes is shaping the marketplace. Using humor, he talked about what's powering the mHealth movement.

These aren't devices that mimic barking dogs. Rather, the acronym stands for body-worn, battery-operated wireless (BOW BOW) devices. And these are all the rage in the mHealth sector right now.

These can be anything from the fitbit wearable fitness trackers, to the Nike fuel band, to even heart-rate monitors and fetal monitors that use sensors to gather data automatically and seamlessly from the wearer.

“These devices push data from the medical institution to the home,” he said.

In other words, they are able to gather information that was previously largely available when you visited the doctor.

Pender said that he is seeing many device manufacturers add wireless capability by simply fitting their devices with Bluetooth Low Energy.

“These are simple, low-cost, ubiquitous,” he said.

Egret Technologies worked with Boston University last summer to develop a bionic pancreas that links a continuous glucose monitor to an infusion pump to an iPhone using Bluetooth Low Energy. More than 30 boys and girls with Type I diabetes were hooked up to such a bionic pancreas, which is not commercially available, Pender said. The device was able to achieve a “significant reduction in nocturnal hypoglycemia,” he said.

One of the values of the mHealth movement is that it can empower patients with data about themselves.

Drawing on the popular trend of taking pictures of oneself with one’s own smartphone known as a “selfies,” Pender talks of the Selfie Dashboard.

He described it as actionable data being presented to the user on their mobile devices in the manner that fitbit and other wearable devices do. While patients want all their data, doctors are looking for fewer metrics, but ones that are more important from a clinical perspective, Pender said.

Ultimately, the value of the BOW BOW devices, the Bluetooth Fairy, and the Selfie Dashboard that are powering the mHealth movement is that they aim to transform healthcare as we know it

They aim to improve the quality of care, drive more self-care, and potentially reduce the cost of care.